Why many soccer fans in the U.S. will be cheering on another team (probably Mexico)

As the World Cup kicks off in Qatar, a scholar probes questions of identity in the American game 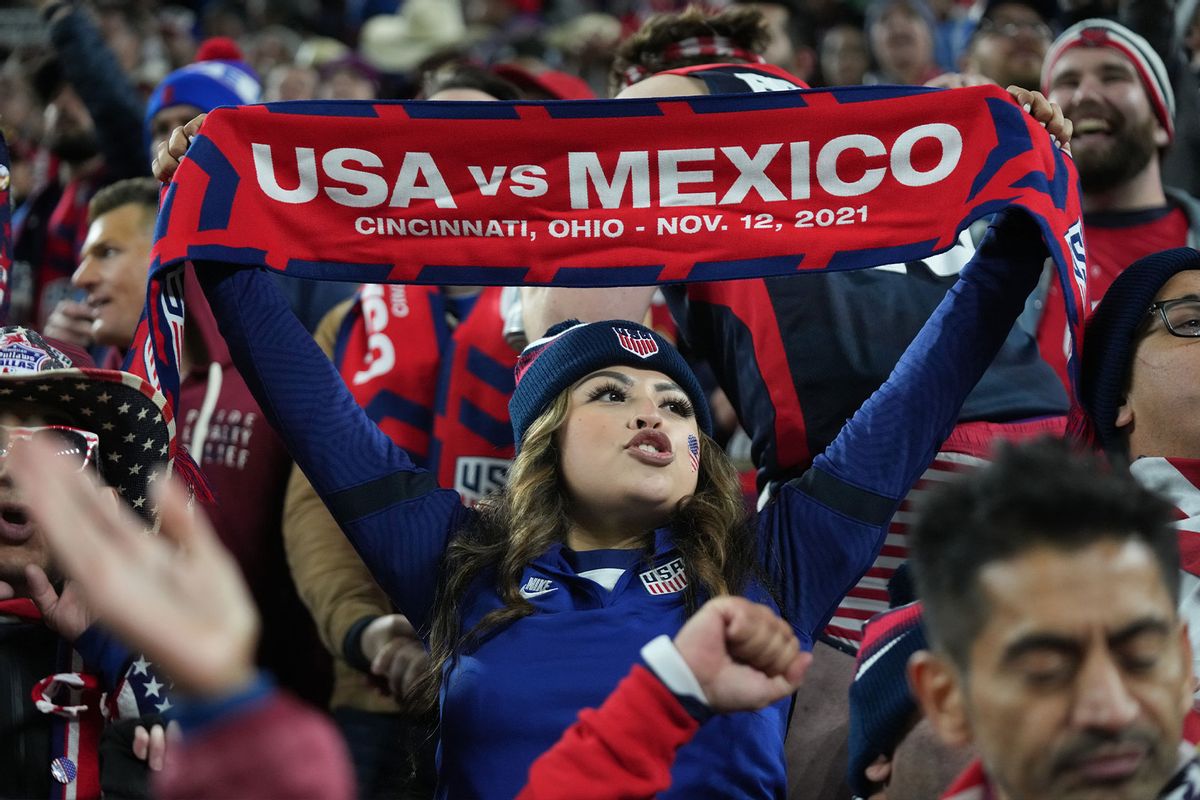 USA fans during a game between Mexico and USMNT at TQL Stadium on November 12, 2021 in Cincinnati, Ohio. (Brad Smith/ISI Photos/Getty Images)
--

Soccer fans will turn their eyes to Qatar starting Nov. 20, 2020, as the World Cup gets underway. But in the U.S., the question of which team will be cheered on from afar isn't entirely straightforward.

For many team's supporters, the World Cup becomes an event to affirm one's national identity. This is true, as cultural critic Laurent Dubois notes, even among fans that are not jingoistic or nationalistic in any other environment.

Indeed, the nationalist fervor that emerges among crowds can boil over into xenophobic inter-national violence. As renowned soccer historian David Goldblatt noted in reference to English soccer crowds in the late 20th century, their "essential xenophobia" revealed a "rabid insular nationalism that was just a few notches more extreme than the foreign policy of the most Europhobic government since the Second World War."

For Americans, though, the experience can be very different. Factors ranging from the relatively low popularity of soccer compared with other sports, familiarity with overseas clubs and perhaps more importantly – especially to Americans of Mexican heritage – an attachment to countries deemed to be more traditional "soccer nations" mean that we Americans can find ourselves oddly divided over the nation we support in the global game.

Where is Uncle Sam in the global game?

Soccer has come a long way in the U.S. over the last few decades in terms of its domestic league and growing a support base.

Yet, outside of our national teams – both the U.S. Women's National Soccer Team (USWNT) and its male counterparts, the USMNT – Americans are more likely to be familiar with teams in Europe than in their own domestic league, Major League Soccer (MLS).

Indeed, 2020 research into the most popular clubs for Americans found that FC Barcelona topped the list, followed by Real Madrid – both from the Spanish La Liga. The next four teams – Manchester United, Liverpool, Chelsea and Arsenal – all play in the English Premier League (EPL).

You have to go down the list to 12th to find an MLS team, LA Galaxy. They and Atlanta United are the only two American clubs in a list of the top 20 most popular teams – as seen by Americans.

What this means is that soccer fans in the U.S. are, in the case of the men's game, likely following players whose national identities are somewhere on the globe outside the U.S., given the relative lack of U.S. men's representation on Europe's biggest teams.

The growth of Liga MX

This whole "national identity thing" gets even messier when you dig deeper into what soccer games are actually the most watched in the U.S.

Both the MLS and European leagues have loyal followers in the U.S. Reviewing Thanksgiving sports-watching in 2020, reporter Connor Fleming noted that the 12 most popular EPL and MLS games during the period had television audiences of 203,000 to 744,000 viewers.

But those figures are dwarfed, Fleming noted, by the biggest overseas soccer match watched over the period: Chivas v. Club América. Mexico's El Súper Clásico, as the game is known, drew a total of 2.5 million viewers watching on Univision's TUDN – the self-proclaimed "home of soccer in the U.S."

What does it mean for American soccer identity at the World Cup that a majority of U.S. soccer fans prefer the Mexican league over the domestic league? And how does this translate into support, in particular, for the U.S. men's national team?

The unparalleled success of the U.S. women's team – an American exceptionalism of a different sort – has led to soaring television ratings for the National Women's Soccer League and a greater focus on the women's national team and "American" players.

Yet it is fair to say that hard-core support for both the U.S. men's and women's national teams among people living in America trails behind that of Mexico.

As sports writer Michael LoRé's observed in an article earlier this year, with 60 million fans in the U.S., Mexico is "the most popular soccer team in the U.S."

Jerseys of the Mexican national team outsell those of both the U.S. men's and women's teams in the United States. This was true even in 2019, the year that the U.S. women's team won the World Cup and their jerseys outsold that of the men's team for the first time.

Such is the popularity of the Mexican national team, especially in large West Coast cities, that it can play in front of a "home crowd" on foreign territory – perhaps the only national team that can claim to do so.

Games against the U.S. are now scheduled in the Midwest and South – in places like Cincinnati, Columbus, Ohio, and Nashville, Tennessee – to account for the imbalance in home support for the teams above and below the border.

Can you have an "other" team?

Not all U.S.-based soccer fans are comfortable with the idea of Mexico being considered a "home nation." In 2018, after the U.S. men's team failed to qualify for the World Cup held in Russia, former U.S. national team star Landon Donovan took part in the "My Other Team is Mexico" campaign – aimed at marketing the sport in the U.S. despite the national team's absence.

"USA fans," Donovan wrote on Twitter, "our team may not be in Russia, but our neighbors to the south are. So join me and their proud #sponsor @WellsFargo to cheer on our other team, Mexico."

The response was mixed. "Nah man!!! Mexico is not 'my team.' Mexico is a rival . . ." replied Donovan's former teammate Cobi Jones. Others expressed similar sentiments in what dissolved into a messy online debate.

Donovan's support of the Mexican team in the 2018 World Cup was seen by some as a cynical marketing move to keep U.S. fans tuned into the World Cup. And it should be noted that the Mexican and U.S. soccer federations were at the time marketed by the same organization – Soccer United Marketing – for all games played in the U.S.

Nonetheless, the debate that the "other team" campaign provoked opens up interesting questions concerning nationalism and patriotism.

A nation of two halves?

Multiple soccer scholars such as Simon Kuper and Lauren Dubois have suggested that a country's soccer team can represent the nation's values. As such, it might be telling that a large segment of people living in the U.S. embrace another team.

Given the complexity of the U.S. soccer fan base – one with a large contingent loyal to either the Mexican team or elite players at European teams – and with the competition for attention from other professional sports, it's perhaps not surprising that supporter loyalty in U.S. is more divided than in other countries.