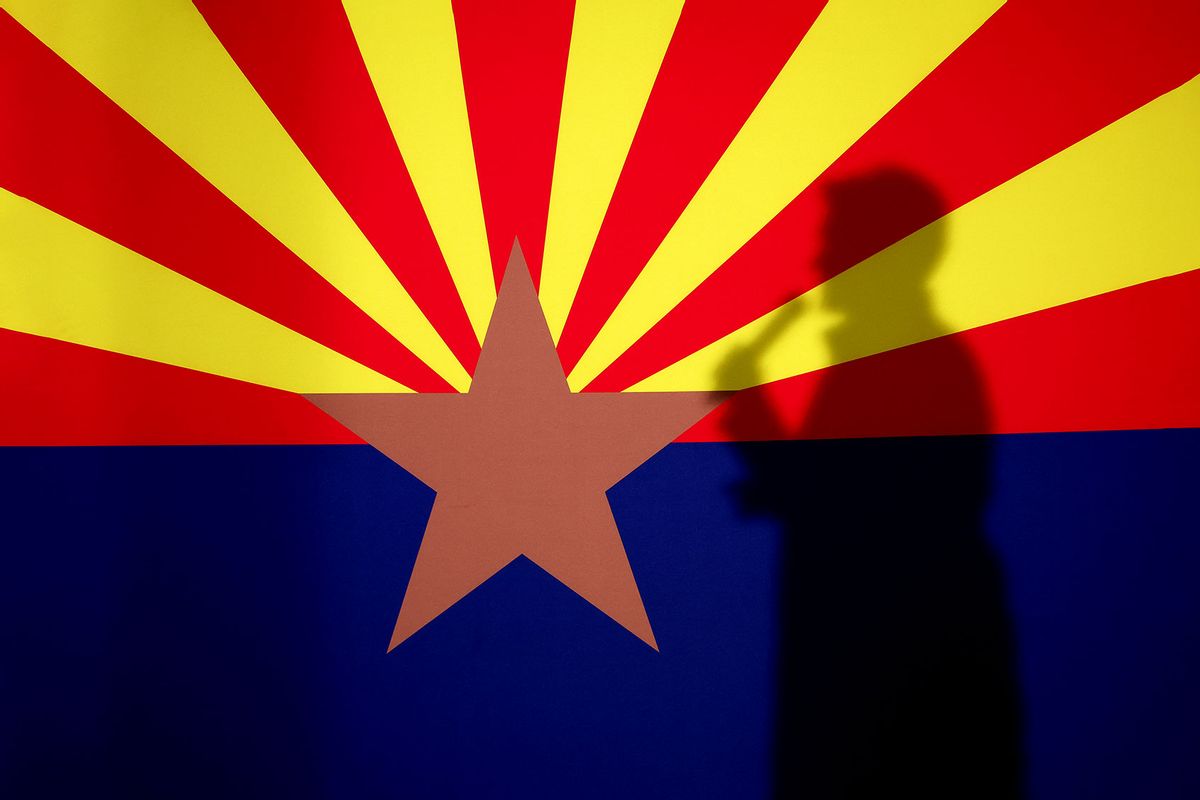 The shadow of Arizona Republican gubernatorial candidate Kari Lake is cast onto the Arizona state flag as she speaks during a get out the vote campaign rally on November 07, 2022 in Prescott, Arizona. (Justin Sullivan/Getty Images)
--

Republican Juan Ciscomani defeated his Democratic opponent by more than 5,000 votes in Arizona's competitive sixth Congressional District, but Cochise County's refusal to certify the results of the November election could cost him his seat.

Arizona Secretary of State Katie Hobbs, also the governor-elect, sued the county after it failed to meet the Nov. 28 deadline to certify its election. The Republican-led Board of Supervisors delayed the canvass vote to hear concerns about the certification of ballot tabulators despite election officials approving the equipment, Bloomberg reported.

The lawsuit, filed in Arizona Superior Court, asks a court to force the Cochise County Board of Supervisors to certify the county's results by Dec. 8 as they are required to do under state law.

If Arizona officials don't have Cochise County's vote totals by the time of their state-level certification next week, the ballots of more than 47,000 county residents can be tossed out, costing Ciscomani his victory and Republicans a seat in the House of Representatives, where they hold a narrow seven-seat majority.

"The Board's inaction not only violates the plain language of the statute, but also undermines a basic tenet of free and fair elections in this state: ensuring that every Arizonan's voice is heard," the lawsuit states.

The county's officials are heading to court this afternoon and may be present without an attorney to represent them against charges of breaking the law by failing to certify the results of the Nov. 8 election, the Arizona Republic reported.

Cochise County supervisors voted to hire attorney Bryan Blehm earlier this week to defend them and the county government against two lawsuits, without discussing the matter with him first. On Wednesday, they were "caught flat-footed" when Blehm as well as another attorney he recommended, declined the offer, the Arizona Republic reported.

Arizona has been a hotbed for election fraud conspiracy theories with failed candidates casting doubt on election tabulation machines and demanding a return to hand-counting votes.

Failed gubernatorial candidate Kari Lake, who ran against Hobbs, has still not conceded her loss. Instead, the Trump-backed election denier filed a lawsuit against Maricopa County election officials falsely claiming that they broke election laws.

Cochise County was among a handful of districts to move for a hand-recount of its midterm vote, The Daily Beast reported. Even as election audits are routine, election experts have advised against hand recounts due to the increased risk of human error.

The county's hand-count effort drew a lawsuit from a resident and a retiree group, which called the campaign "unlawful, chaotic, time-consuming and unnecessary", according to The Daily Beast.  A judge ultimately ruled that local officials could only hand-count small portions of ballots.

In an interview with the Daily Beast, Cochise County Supervisor Peggy Judd said the board intends on certifying the election.

"We're just trying to get some answers to things about the machines," Judd said. "We full well intend to certify it. Why would we not? You know? So we're going to, we're just holding off as long as we can, doing things that are legal for us to do, no matter what they say. It's so weird, we've been kind of dealing with this the whole time. They keep telling us 'That's illegal. You're gonna go to jail,' but it hasn't been so, you know, law is up to interpretation. Only the judge in the end can say."

MSNBC's Joe Scarborough mocked Republicans for being so fixated on upsetting their political enemies that they could fumble away a congressional seat out of spite.

"All the major election deniers all lost their elections, and I know a lot of Republicans thought they were going to own the libs – it's all about owning the libs…now it's gotten so extreme they're not going to certify a county's votes that's going to cost them a seat in Congress and a statewide constitutional seat," Scarborough said.

Under state law, Arizona is supposed to certify its results by Dec. 8, with or without certification from all of the counties.