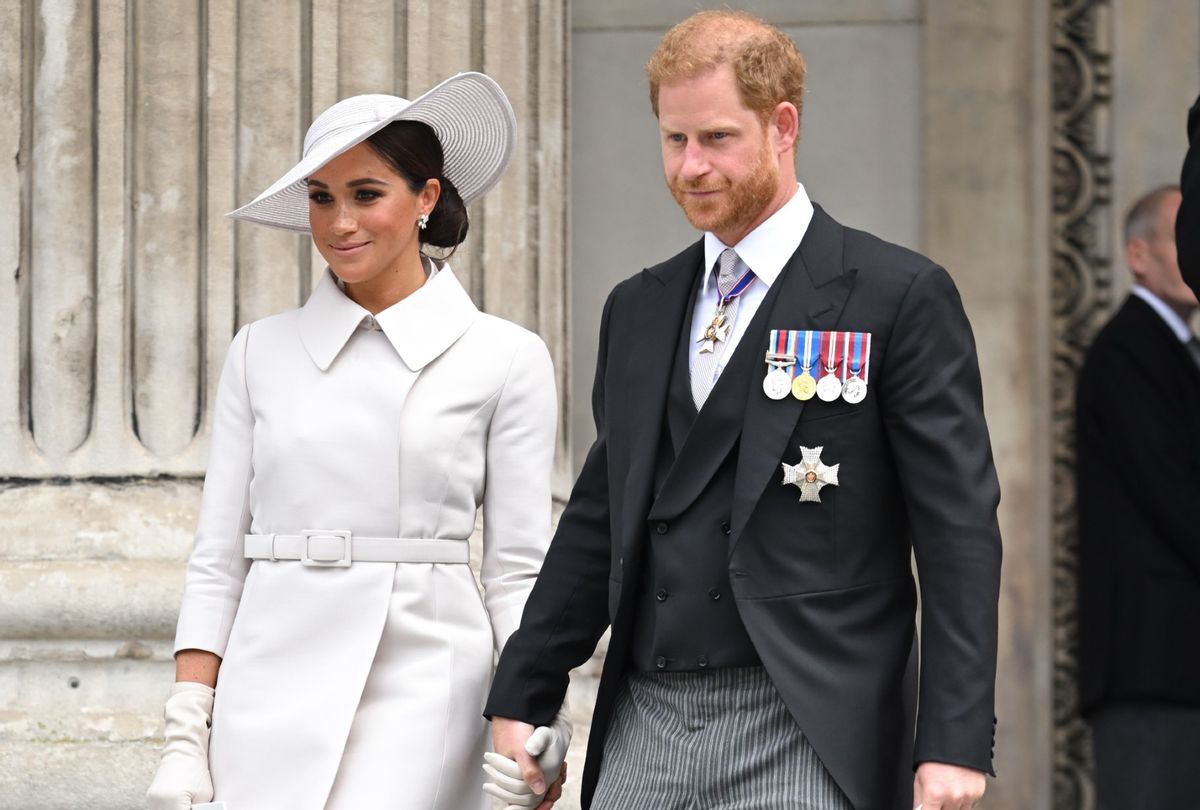 Allies are standing in support of Meghan, the Duchess of Sussex, after the recent revelations that Prince William's godmother, Lady Susan Hussey had a racist exchange with Ngozi Fulani, of the community initiative Sistah Space.

The high-ranking Buckingham Palace aide has resigned since the incident became public, but the exchange is just another in a line of racist incidents coming from the British Royal Family.

Fulani wrote about the exchange she had with Lady Hussey, in which the palace aide asked where Fulani was from.

She explained that she was born in Britain, but Hussey persisted, asking where she was really from, the implication was that because she was Black, she wasn't actually from Britain.

"No, what part of Africa are YOU from? Hussey asked.

"I don't know, they didn't leave any records," Fulani said.

"Well, you must know where you're from, I spent time in France. Where are you from?" Hussey came back.

"No, but what Nationality are you?" Hussey asked again.

"I am born here and am British," Fulani tried to explain again.

"Oh, I can see I am going to have a challenge getting you to say where you are from. When did you first come here," Hussey ked pressing, not realizing what she was revealing about herself.

"Lady! I'm a British national, my parents came here in the 50's when—" Fulani said before Hussey was cut off.

"Oh, I knew we'd get there in the end, you're Caribbean!" Hussey said.

Over the past several years Prince Harry and Duchess Meghan have spoken out about the racism they've experienced in the Palace and even from their own family members. Harry revealed in their interview with Oprah that he and his father didn't speak for a while and made it clear that his grandparents, the Queen and Prince Phillip, were always welcoming and loving toward Meghan.

At one point, however, there was a discussion about what "color" Harry and Meghan's children would be, given that she is Black. An interview with the former counterterrorism police chief revealed that the couple faced "disgusting and very real" threats from right-wing extremists. He was in charge of the royal protection while working at the Metropolitan Police.

Speaking to Britain's Channel 4 News, Neil Basu said, "If you'd seen the stuff that was written, and you were receiving it … you would feel under threat all of the time."

Nadine White, race correspondent and columnist for the Independent spoke with Fulani about the incident and the public outcry that has followed.

"Ngozi Fulani tells me she hasn't heard from the palace [or] received [an] apology after the resignation of the aide who made racially offensive remarks." She also tweeted that the incident is continued evidence of "racism in the royal family" and "calls for anti-racism training to be rolled out across royal households."

The Palace said that they have reached out, so it isn't clear whether that happened after the report or if it wasn't true.

It's being seen by Harry and Meghan fans as vindication for their ongoing comments about the danger they faced and their desperate need for security. Things got so bad at one point that while pregnant with their son, Archie, Meghan was thinking about suicide. After seeing what his mother went through, Harry said that it was important they take major steps to ensure he and his family always felt safe and were able to have a life outside the palace.

"It's funny how some people clutch their pearls when people bring up British colonialism," said Yashar Ali, New York MagazineNew York Magazine. "Especially when they bring it up in the context of the royal family and its courtiers. But here's a perfect example of a colonial attitude in Prince William's godmother. Not the only one!"

Managing director of Word In Black, Liz Courquet-Lesaulnier, tweeted about the words from Lady Hussey that are all too familiar to people of color.

"The good ol yeah, but where are you REALLY from?" she said. "And these people tried to act like Meghan Markle made it all up. SMH... Also this isn't just a random *staff member* -- it's Prince William's GODMOTHER, Lady Susan Hussey."

The first reports about the news were that Hussey was nothing more than a palace aide, when in fact, she's a member of the insiders.

Political commentator Matthew Stadlen noted, "The obvious question now is: Just how prevalent is racism at the heart of the Royal Family?

All of this comes as Prince William and Kate are arriving in America for the first time in eight years. The trip begins in Boston, Massachusetts, ironically the state in which the "shot heard round the world" took place that began the American Revolution against the British in 1775.