“Snubbed”: Family of officer who died after Jan. 6 refuses to shake hands with McConnell, McCarthy

"No one should shake hands with insurrectionist sympathizers," advocacy group says 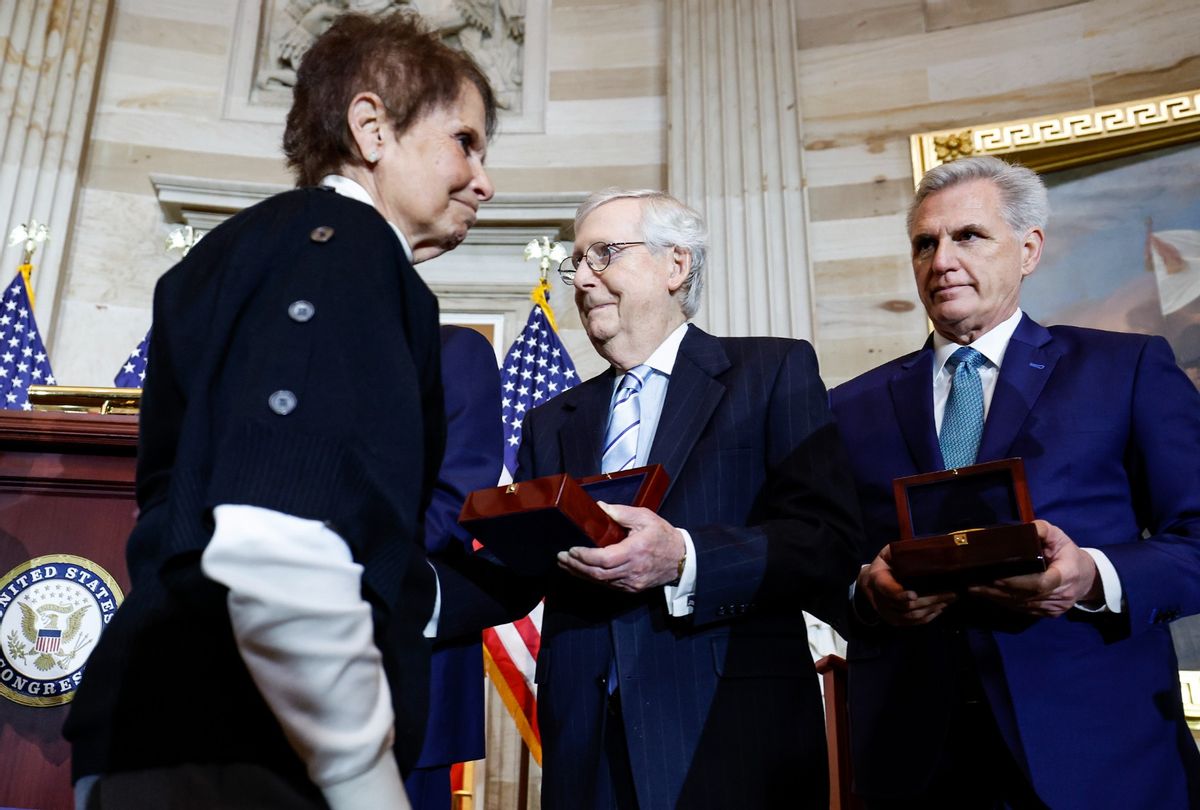 Senate Minority Leader Mitch McConnell (R-KY) (C) holds out his hand for a handshake with Gladys Sicknick (L), the mother of Capitol Police officer Brian Sicknick who died after the events of January 6, during a Congressional Gold Medal Ceremony for U.S. Capitol Police and D.C. Metropolitan Police officers in the Rotunda of the U.S. Capitol Building on December 6, 2022 in Washington, DC. (Anna Moneymaker/Getty Images)
--

Relatives of the late Capitol Police Officer Brian Sicknick—who died a day after being assaulted by right-wing rioters on January 6, 2021—refused to shake hands with Republican leaders at a Tuesday Congressional Gold Medal ceremony to honor those who defended democracy and the complex during last year's attack.

Video footage of Sicknick's family bypassing Senate Majority Leader Mitch McConnell, R-Ky., and House Minority Kevin McCarthy, R-Calif.,—who's aiming to be the next speaker—quickly spread on social media and was called both "amazing" and "awkward."

Asked why she didn't shake the hands of McConnell and McCarthy, Gladys Sicknick, the fallen officer's mother, told CNN that "they're just two-faced."

"I'm just tired of them standing there and saying how wonderful the Capitol Police is and then they turn around and… go down to Mar-a-Lago and kiss his ring and come back and stand here and sit with—it just, it just hurts," she added, referring to former President Donald Trump and his Florida estate.

Many observers supported the Sicknick family's decision, especially given the key role that GOP leaders played in inciting the deadly attack that briefly delayed certification of the 2020 presidential election results.

"No one should shake hands with insurrectionist sympathizers," declared the group Voto Latino.

Pointing to the House panel that is probing the Capitol attack and, according to its chair, will soon make criminal referrals, Georgetown University professor Don Moynihan tweeted, "Reminder that McCarthy refused to comply with a subpoena to uncover the origins of January 6th, and he now plans to investigate the January 6th commission."

While McConnell is "getting snubbed by those receiving awards related to January 6th," Moynihan noted, "McCarthy knows better than even to offer his hand."

Notably, Sicknick's relatives did shake the hand of Senate Majority Leader Chuck Schumer, D-N.Y., who spoke during the event.

"January 6th, 2021 was a day of violence and a day of darkness; but today, under this hallowed Capitol Dome, we come to sanctify it also as a day of heroes," said Schumer. "We do so by bestowing the highest honor Congress has to offer to the men and women of the U.S. Capitol Police and the Metropolitan Police Department of Washington, D.C."

"On the day democracy faced maximum danger, these public servants responded with maximum valor," he continued. "History will forever note that on January 6th, democracy lived on because of them."