Trump's worst day yet? Herschel loses and his company's guilty of tax fraud

Herschel Walker lost decisively and the Trump Organization was found guilty on all counts. And it'll get worse 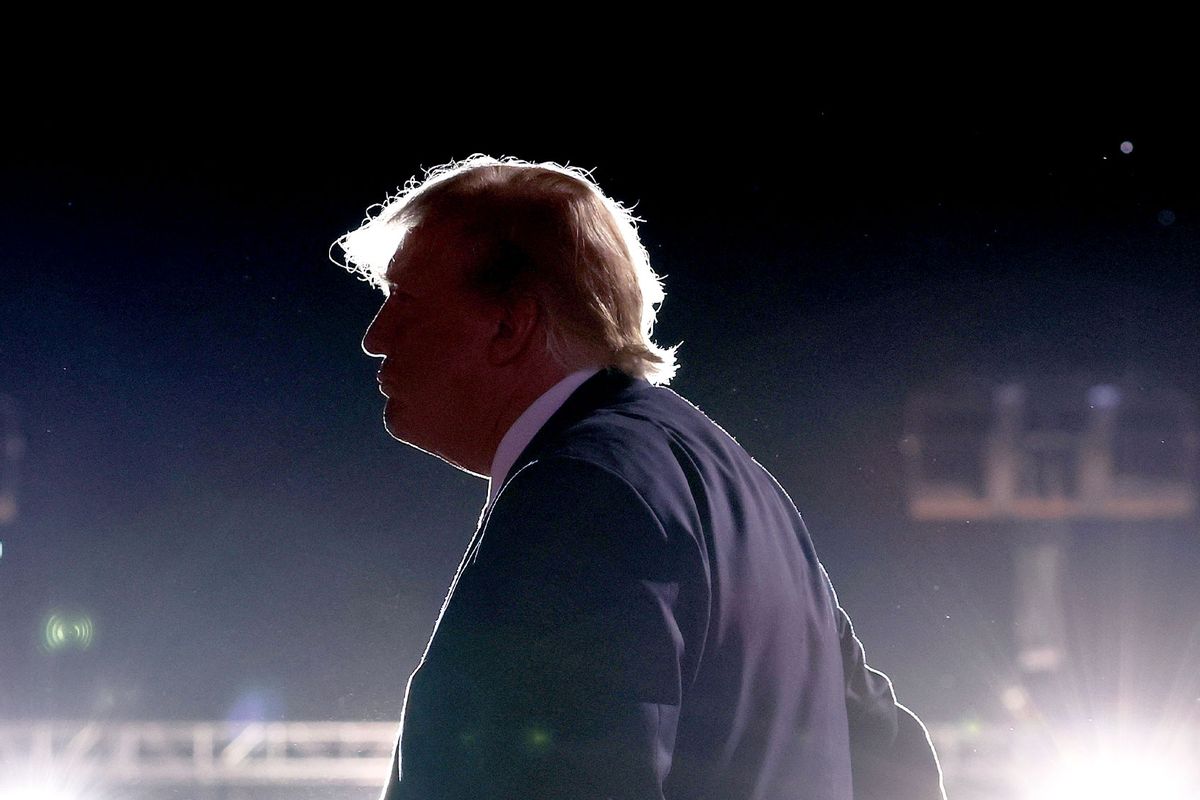 On Tuesday night, Donald Trump added one last name to his 2022 loss column and it's one that's close to his heart. Former football hero Herschel Walker has been a Trump ally since long before he entered politics, so the ex-president has to take it personally that his handpicked candidate decisively lost his bid for the Georgia U.S. Senate seat held by Democrat Raphael Warnock. But then, this is just the latest in a long list of Trump-endorsed losers in statewide races this cycle. Whatever he may claim, his record in such races is 2-14.

In truth, Trump did sound a bit upset. His response to the news on his Twitter-substitute social media platform Truth Social was simply this: "OUR COUNTRY IS IN BIG TROUBLE. WHAT A MESS!" He might just as easily have been talking about himself. Bad as the runoff election results in Georgia were for Donald Trump, that was nothing compared to the big news out of Manhattan earlier in the day. That was where a jury found the Trump Organization, the family business founded by his paternal grandmother and his father in 1927, guilty on a range of criminal charges, including tax fraud, conspiracy and falsifying business records.

The Trump company's longtime CFO, Allen Weisselberg, had already pleaded guilty to the scheme to provide him and his family with expensive perks under the table to avoid paying taxes and testified that the company also benefited from the scheme. Despite ample evidence that Trump knew exactly what was going on, Weisselberg dutifully fell on his sword, telling the jury that he and another employee came up with the entire scheme, which explains why the prosecutors never indicted Trump for his role in all of this. (Weisselberg also explained that while he is no longer CFO he still goes to the office, collects his $650,000 salary and expects to get a $500,000 bonus in January, which is awfully generous for a man who has admitted to committing a long list of financial crimes.)

This was a case brought against a company rather than an individual, so Donald Trump was not on trial. But the evidence made clear that the conspiracy went on for 15 years, so the idea that Trump wasn't personally aware of it is ludicrous. According to one of his longtime attorneys, this is a man who liked to personally sign all the checks so he could "monitor and keep control over what's going on in the company." His signature appeared on the check that got him in trouble for using his charity's money to pay off then-Florida Attorney General Pam Bondi. It also appeared on a check Trump signed while he was president, to reimburse his former lawyer Michael Cohen for the payoffs to adult film actress Stormy Daniels.

The judge largely kept Trump's name out of the trial until the very end when the company's defense attorneys brought him up repeatedly in closing arguments. That opened the door:

That gave prosecutors the opportunity to hammer Trump personally, claiming that he "knew exactly" what his executives were up to and had fostered a culture of deception and fraud. At one point in his closing arguments, Manhattan assistant district attorney Joshua Steinglass showed jurors a memo from Trump Organization chief operating office Matthew Calimari in which Calimari requested a $75,000 paycut — the exact amount of rent the company was paying for a Trump-owned apartment for him to live in. The document shown to jurors had Trump's initials written in large letters with a black Sharpie pen. "Mr. Trump explicitly sanctioning tax fraud! That's what this document shows!" Steinglass told the jury.

Trump is notoriously cheap and he would certainly have known that this scam was saving him money by allowing the company to pay his employees in perks instead of salary. It's exactly the kind of thing he would do, and anyone who isn't totally down the MAGA rabbit hole would understand that.

Of course Republican officials simply don't care. As far as they're concerned, this is penny-ante stuff hardly even worth talking about. As the New York Times put it, the potential criminal penalty, a fine of $1.62 million, amounts to little more than "a rounding error for Mr. Trump, who typically notched hundreds of millions of dollars in revenue during his presidency." (That's right, during his presidency.)

Trump responded to the verdict with this statement, which as usual is full of lies: 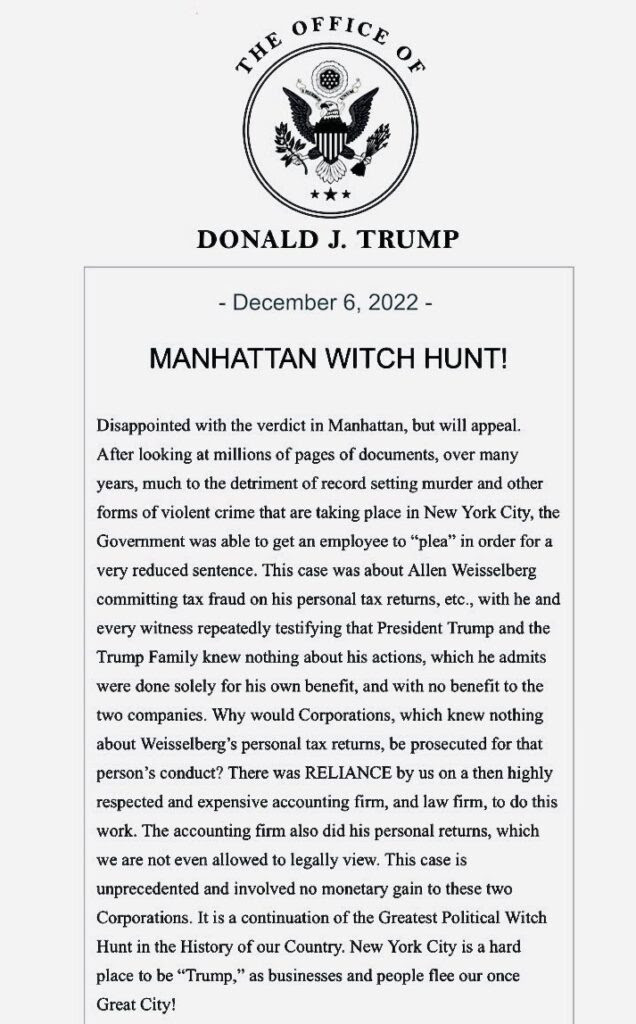 It's unlikely that this verdict will hurt Trump politically. But it could definitely damage his business and affect his ongoing legal battles, particularly the ones in New York, where he currently faces a major civil case brought by state Attorney General Leticia James, based on much of the same evidence used in this trial. But that case targets the individuals who run the company, specifically Trump himself, his sons Eric and Donald Jr. and his daughter Ivanka. The potential penalty in that case could be as much s $250 million. That's not a rounding error.

Earlier this week, Manhattan District Attorney Alvin Bragg, who successfully prosecuted the Trump Organization criminal case, announced he was bringing on a new prosecutor, Matthew Colangelo, who has extensive Trump experience, both working on the state's civil case and the investigation of Trump's foundation, which ended up with the Trump family barred from ever again running a charitable organization in New York. According to the New York Times, Colangelo is likely to take on a revived criminal investigation into allegations that Trump illegally inflated the value of his assets, as well as the Stormy Daniels hush-money payments.

While the financial penalty from this criminal verdict is insignificant, it's hard to see how this case doesn't shred the already tattered reputation of the Trump Organization. Sure, the Trumps can continue to do sweetheart deals with foreign countries, as they just did with a Saudi developer for a Trump-licensed golf resort in Oman. But his brand is now entirely contingent on his political influence. Nobody would want to do business with such a company without it.

Ivanka Trump has backed away from the business, "Succession" style, living instead on her husband Jared Kushner's lucrative influence-peddling with many of the same actors. But Donald Trump Jr. and Eric Trump have never had any kind of real job other than working for the Trump Organization. Of course they seem to be spending all their time these days making trash-talk videos and appearing at fringe QAnon conferences, so perhaps the whole family has already moved on to greener pastures. The younger generation had better get real professions, however, because from the looks of things, there won't be much left of the family business once Donald Trump gets through with it.