A prayer before dying: On the Republican Party's terminal illness

I was a Republican for years. I can testify that GOP leaders know their party is doomed, and there's no escape 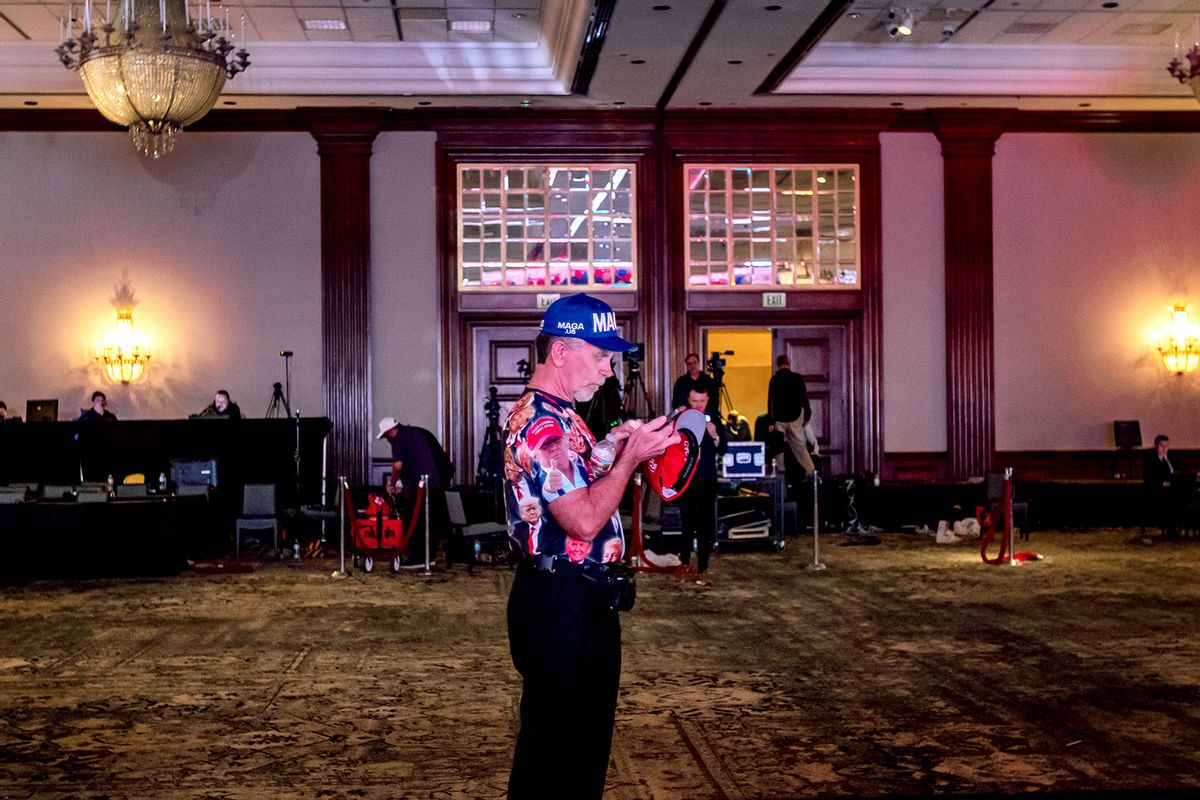 A die-hard Republican wearing a MAGA hat and Trump shirt is one of the last Kari Lake supporters in the ballroom on Election night where Lake was in a close battle with Democratic challenger Kate Hobbs for governor of Arizona on November 8, 2022 in Scottsdale, Arizona. (Gina Ferazzi / Los Angeles Times via Getty Images)
--

The Republican Party is terminally ill, and most of its voters are oblivious to this fact.

Taking a pre-mortem liberty with the five stages of grief, from Elisabeth Kübler-Ross' "On Death and Dying" — denial, anger, bargaining, depression, acceptance — what one will notice about Republican voters and elected officials is that they currently, and confusedly, occupy numerous stages.

Yes, we will continue to see Republican candidates, who will cite heroic dead presidents (but no living ones), and will prattle on with their usual myths (which I'll get to in a moment).

But the GOP is a soon-to-be spectral political party. What rendered the party sickly beyond cure? Its illness are its politically traumatizing mythologies, as old as our country itself.

I voted for Trump — twice. I was a right-wing pundit. I was dead wrong about all of it

The Republican Political Traumatization Mythologies Meter is as follows; there's some overlap from one phase to another, but differences may be overt, rather than implied. The higher a Republican politician is on the meter, the more politically traumatizing he/she is:

No Republican can win 270 electoral votes without moderate (levels 3-6), to heavy (7 and above) traumatizing; and the number of states a Republican running for statewide office can win is likely shrinking with each passing election cycle — hence the GOP's worsening hostility to democracy.

Given that around 44 percent of voting-age Americans voted in the 2022 midterms — with Democrats doing well both federally, and in numerous gubernatorial and state legislative races — many Republicans, perhaps even most, have undoubtedly further realized that the market for the politically traumatizing mythological product has indefinitely dwindled; this is probably the depression stage for many of them.

The irrefutable fact is: the Republican Party appealed (habitually, I talk of the party in the past tense) to those who think moving backward is moving forward. Whether that means looking to an imaginary version of 1776, the "Lost Cause" of the Confederacy, the 1950s as America's apogee of greatness or relitigating the 2020 election, the entire GOP product is backward-facing. I know this oh so well, having been politically traumatized myself, by the GOP's offering; and having spent considerable time, for years, among similarly traumatized fellow Republicans, convinced I was one of the "real Americans" prepared to water the trees of liberty with the blood of my mortal enemies. Everyone had better understand what "make America great again" really means.

As Catesby remarks in Shakespeare's "Richard III": "'tis a vile thing to die... When men are unprepared and look not for it."

The GOP, of course, withheld the diagnosis of its terminal political illness from its voters; you may debate among yourselves when the irreversible malignancy metastasized within the GOP. I am of the belief that it accelerated fatefully with the election of Obama, and reached the irreversible stage with Donald Trump. Never in our history were successive presidents as starkly contrasting as Obama and Trump, whether as leaders or as decent human beings.

Republican voters are mostly unprepared for the imminent death of their party; most are probably stuck in the Purgatory between denial and anger. Republican politicians are scattered across the bargaining, depression and acceptance stages; one notable acceptor is Sen. Josh Hawley, who has stated in unambiguous terms that the old GOP is dead, thus necessitating a new GOP.

The new GOP that Hawley envisions, however, sounds an awful lot like the old one; his reborn party must be more zealously supportive of the Second Amendment (9-10 on the mythologies meter), "parental rights" (3-4) and placing a sword of Damocles over the tyrannical heads of "Big Tech" (7-8). Hawley's new GOP will likely convince candidates from various disadvantaged minority groups, such as the recently defeated Herschel Walker, to run for offices any relatively objective person can see they are wholly unqualified for. In Walker's case, white Republicans supported him because they've been politically traumatized into believing the mythology that a Republican is always preferable to a Democrat. I wanted Walker nowhere near the Senate; but he's been exploited by those who would have attended Jim Crow minstrel performances in 1950s America.

At least Josh Hawley understands that the old GOP is dead. The new party he envisions, however, sounds an awful lot like the old one: Second Amendment, "parental rights," a sword of Damocles held over Big Tech.

The GOP has not been an active or proactive political force for years. It is reactive and reactionary — it adopted the politically traumatizing, hysterical and paranoid mythologies disseminated throughout the right-wing infotainment system, often crafted in the deepest and darkest bowels of the rabbit-holed internet, and then regurgitated them.

Though I will not excuse ignorance, politically traumatized Republicans have themselves been failed by the liars, grifters, carnival barkers, faux-constitutionalists and insurrectionary apologists they've supported — all because they were convinced that any Republican is always preferable to any Democrat. What a pathetic political life to lead; again, I once led such a life, enraptured by make-believe bogeymen, and can attest to its dehumanizing misery.

In 2024, Republican nominee Donald Trump's third attempt to resurrect the "good ol' days" will be met with the same nonviolent show of voter force he received in his second attempt. The GOP cannot vote its way out of its Trump problem, because no cult leaders ever willingly steps aside for another. (Lookin' at you, Ronnie DeSantis!)

In Trump's case, it goes even beyond the cult: He would burn his own nation to the ground to rule over the ashes.

I do not believe anyone who voted for Trump should be judged for doing so; and in a free society I do not believe voters need to defend their votes. But any Trump supporter who has not yet exited via one of the myriad available off-ramps will never do so; my guess is that 90 percent of those who voted for him in 2020 would do so again tomorrow. Such voters are stuck at the bargaining stage, quite a soulful distance away from accepting that "make America great again" is a reverie in permanent abeyance of reality. Slowly and surely, more and more Republican voters will graduate through the five stages of grief.

Any Trump supporter who has not yet found an off-ramp will never do so; such voters are stuck at the bargaining stage, a long way from accepting that "make America great again" is a damaging reverie.

Trump, DeSantis, Mike Pence, Mike Pompeo, et al., peddle identical politically traumatizing mythologies, because the myths are effective — albeit for a shrinking segment of the electorate. The mythologies are a form of identity politics; forging a diverse and varied coalition of Americans, as the Democrats sometimes do well and sometimes poorly, is much more difficult than politically traumatizing identity politics. This is why those who genuinely recognize the frailty and fragility of democratic order must continue to form ideologically diverse alliances, as occurred in these past midterms, including the Georgia runoff; this is not a want, but a must. America's next Sodom and Gomorrah moment is coming; progress and existential struggle are inextricably linked, and always will be.

I find no pleasure in all this morbidity; and I don't want a single-party political party system. I much prefer the candid, pragmatic optimism and stout leadership of Obama to the apocalyptic dystopia of the GOP, in which Republicans are victimized because of their extolled morality and piety (paid-for abortions for mistresses, wives and daughters aside). We cannot fully eliminate the right's politically traumatizing mythologies, but we must stymie and reduce them. Building diverse pro-democracy alliances, and telling original, inspiring and challenging stories about our national mythologies (the good, bad and ugly ones), can begin to heal our nation's political traumatization. The continued perfection of our Union demands it.

about the Republican predicament

Rich Logis is the founder of Listen. Lead. Unite., a born-again human being and a happily married, small-business-owning dad who is committed to healing America’s political traumatization by bringing together communities and elected leaders to collaborate on nonpartisan economic, educational and quality of life solutions.