How Trump and Elon build their cults: Exploiting right-wing insecurity

Yep, Trump's latest "MAJOR ANNOUNCEMENT" is massive cringe — but that only makes his fans cling to him harder 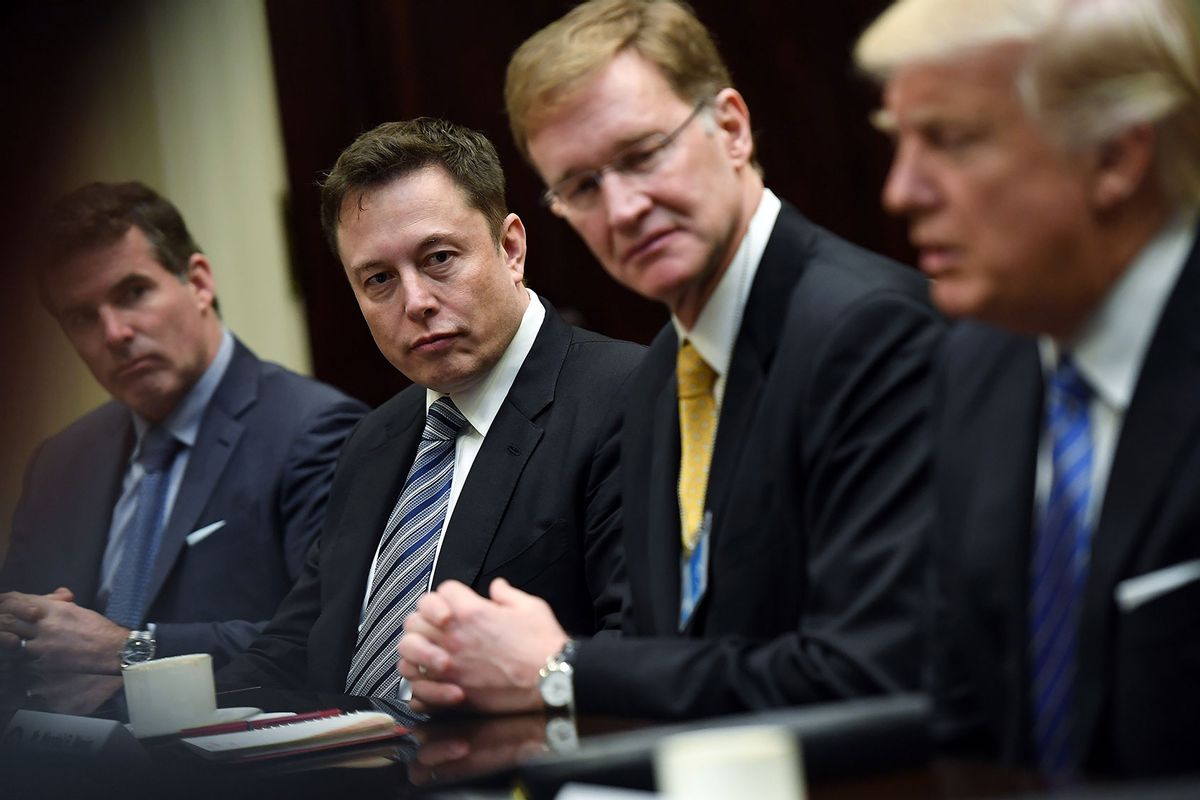 It was too laughable not to share it: On his Twitter knockoff site Truth Social, Donald Trump posted on Wednesday about a "MAJOR ANNOUNCEMENT tomorrow," which included a video of him dressed as a superhero shooting lasers out of his eyes.

It's what the kids online call "cringe" — and oh man, it couldn't have been more perfect for the online churn of public mockery. I'm on a Twitter diet, but I totally sent this dumb image to my friends, so we could join in the hilarity. So many questions! Is Trump really so delusional about his physical form that he thinks he looks like Superman? How can his fans not perceive that he does not, in fact, look like that? The lasers-out-of-the-eyes thing is directly out of the "Dark Brandon" meme liberals use to celebrate Joe Biden's accomplishments. Does Trump not know how desperate he looks, trying to bite Dark Brandon's style? How dumb is he anyway?

Trump has not returned to Twitter, even though Elon Musk reinstated his account and publicly begged him to come back. But he managed to dominate Twitter on Wednesday anyway, as one liberal hater after another retweeted screenshots of the superhero meme, making sure that every Beltway journalist was well aware of Thursday's "MAJOR ANNOUNCEMENT." The silliness of it guaranteed much more coverage than if Trump had tweeted out a vaguely normal picture of himself.

Unsurprisingly, the actual announcement was not just underwhelming but an even higher degree of self-pantsing:

But here's the part we cannot ignore: Trump is going to sell a lot of those dopey digital trading cards. As viral marketing campaigns go, this one was a solid win. Not only did all that liberal dunking garner news coverage and dramatic social media spread, but he also conveyed an important message to his supporters: Those liberal elites are laughing at you. And the way to strike back, proving that you're in on the joke and making the liberals cry, is to buy this worthless crap and send Donald Trump more of your money.

Since my book "Troll Nation: How the Right Became Trump-Worshipping Monsters Set on Rat-F*cking Liberals, America, and Truth Itself" was published in 2018, its central thesis — that the modern right is motivated by an obsessive desire to troll the left — has become a lot more widely accepted. Just this week, Washington Post columnist Greg Sargent pointed out that Musk has gotten into the troll business because he understands that "for large swaths of the right-wing media ecosystem, the Triggering of the Libs has become an end in itself." By tweeting repulsive things and drawing liberal outrage and condemnation, Musk can get more engagement while sucking in more fans who love how angry he makes their perceived enemies.

But what is too often overlooked in these discussions is how much this empire of trolling relies on the right's inferiority complex. At the root of the trolling mindset is defensiveness. Conservatives perceive, not always incorrectly, that liberals are laughing at them for being a bunch of tasteless rubes with boring sex lives and expanding beer guts. This perception does not motivate a desire toward self-improvement, but instead a longing for revenge, mostly in the form of imposing their grossness on the supposedly more refined existence of those they despise.

This inferiority complex is why the term "elite" has become common currency on Fox News. They don't use it accurately — say, to describe those who hold excessive wealth and power, but as a swipe at the perceived progressive values of college-educate cultural tastemakers in coastal cities. It explains how Musk, who until very recently was ranked as the richest man in the world, can get away with styling himself as a populist hero. Childish as it may be, Musk and his fanboys are still agitated about their perceived rejection by the Cool Kids.

The slavish fandom that people like Musk and Trump attract is generally confusing to folks on the left, because those two guys are such embarrassing losers. Trump's superhero meme has its brother in Musk's recent bout of social media thirst:

It was already pathetic enough that Musk has been reduced to begging right-wing douchebags to like him. The items in that image make it worse, creating a virtual bingo card of terminal dweebness: Caffeine-Free Diet Coke. A painting of George Washington that was uncool when our grandparents were kids. A fake gun. In order to get the women of Tinder to swipe left faster, all you'd need would be a pet iguana and a decorative sword. (Arguably, the vajra on the table of a non-Buddhist counts for the latter.)

Elon Musk's "blue check" debacle: His brain has been broken by whiny incels

But it's a mistake to conclude that Musk's fans simply fail to understand how uncool the Tesla CEO has revealed himself to be. He's created a cult of dork solidarity around him, one committed to a "Revenge of the Nerds"-style fantasy of ruining Twitter for all those blue-checked people who make them feel bad about themselves. That doesn't just appeal to those who already identify as conservative, either. Musk's cult is part of a larger ecosystem that seeks to redirect angry young men toward fascist politics. Musk may be running Twitter into the ground financially, but as a right-wing political project, his takeover of the company is going great: He's adding 200,000 new followers a day.

In his recent book "Weapons of Mass Delusion: When the Republican Party Lost Its Mind," journalist Robert Draper explains that, in his many conversations with Trump voters, it became clear that they were not confused about the actual nature of Donald Trump's personality. In fact, he writes, "the MAGA faithful adored their emperor without clothes." As he told Salon, "everything that we would ordinarily view as a vice they found to be to be virtuous," often precisely because it pisses off liberals so much.

When conservatives make online jokes about the "Bad Orange Man," they're establishing some ironic distance: They know he sucks. But none of that detracts from his allure in the slightest.

You see this all the time on social media, when conservatives make jokes about how liberals hate the "bad orange man." In making that joke, they're indicating that they know Trump is a weird-looking guy who wears orange makeup every day and also that, by any reasonable standard, he sucks. But none of that detracts from his allure in the slightest. He's basically a human pile of dog poop they get to rub liberal noses in, an animated and endlessly whiny punishment they can inflict on those who make them feel insecure.

Shame is an odd emotion. It can sometimes motivate a person to slow down or stop behaviors that cause it. Just as often, however, it can backfire, creating a defensive reaction that causes the person to double down. Trump's dumb superhero meme is a good example of the latter tendency in action. Liberals have mocked conservatives for years for their hero worship of Trump. But rather backing down, they just go at it harder — admittedly, with a bit of ironic distance — by churning out cartoonish images that reimagine Trump as Superman or Elvis or Rocky or some other masculine icon.

Of course these folks are still suckers. They may think they're sticking it to the liberals, but as usual Trump is just squeezing them for cash. But as long as they keep nursing their grievance over real or imagined liberal mockery, Trump fans will never quite be able to see how much the bad orange man has been using them all along.