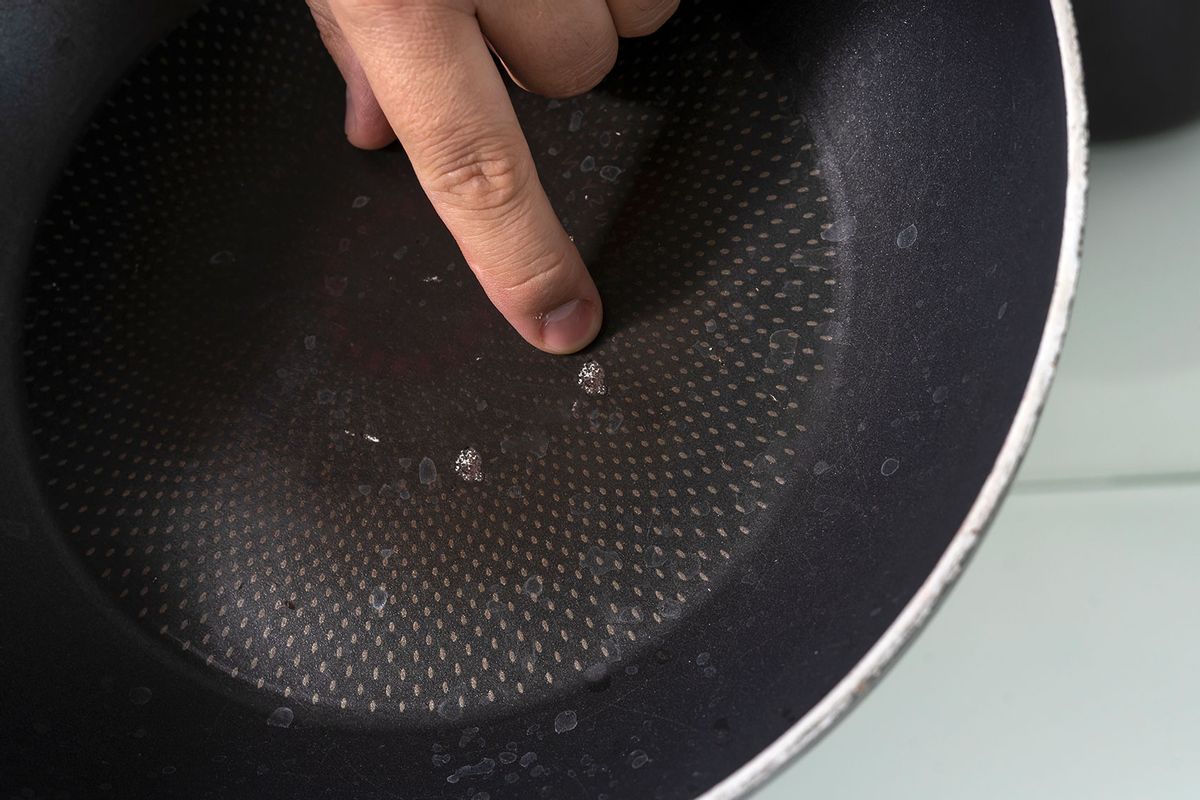 The term "forever chemicals" is as ominous as it sounds: the nickname for a diverse group of consumer and industrial chemicals known as per- and polyfluoroalkyl substances [PFAS], these artificial substances lurk in the human bloodstream for decades, and are so unavoidable in modern industrial civilizations that they usually surface in the body in utero. The "forever" appellation is a reference to their resistance to breaking down: PFAS very rarely biodegrade, meaning almost all of the PFAS that have ever been produced still exist.

There are more than 4,700 PFAS in existence — Teflon, the substance used in non-stick pans, is perhaps the best-known of the bunch — and they can be found in a wide range of products: Non-stick cookware, receipt paper, food packaging, stain-resistant coating on fabrics like carpets, water-resistant fabrics like umbrellas, dental floss, cleaning products and even water bottles. Because PFAS are so widely used, it is currently impossible for humans to avoid contact with them. They are notorious for being impossible to get rid of, and are linked to health conditions from hypertension and liver disease to lowered sperm count. Despite these red flags studies repeatedly show that PFAS continue to contaminate public and private water supplies.

This technique could protect humans from PFAS-related illnesses by providing "a promising platform to treat PFAS-contaminated drinking water."

Yet there is potential good news: as it turns out, even substances with "forever" in their name might not literally last forever. A new study in the scientific publication Journal of Hazardous Materials Letters reveals a possible way to break down PFAS in water by using hydrogen and ultraviolet light. As the study's authors conclude, this technique could protect humans from PFAS-related illnesses by providing "a promising platform to treat PFAS-contaminated drinking water sources and brine concentrates."

Researchers at the University of California – Riverside developed this method by finding water contaminated with PFAS and then adding extra hydrogen (water, after all, already contains hydrogen atoms). This polarizes the water molecules and makes them more reactive so that, when they are exposed to ultraviolet light, chemical reactions occur to break down specific types of PFAS known as PFOA and PFOS without any dangerous byproducts. Even better, the advanced process does so by anywhere from 10% to 95% compared to other forms of ultraviolet light. The new method also defluorinates up to 94% of the molecules.

"It discovered the most efficient photochemical process so far to destruct PFAS while not introducing undesirable byproducts," Haizhou Liu, the corresponding author of the study, told Salon by email. "It also uses a different UV wavelength from traditional technologies."

Liz Costello, MPH — a PhD student at the University of Southern California who has studied PFAS but was not involved in the latest study — told Salon that she is "excited" about the results.

"They focused on just two PFAS, PFOA and PFOS, so I would be interested to see how this method works for some of the other common PFAS or for the replacement chemicals," Costello told Salon by email. She added that "it's also hard to tell how easily this method might be implemented in the real world, or how cost effective it might be compared to others."

Costello also pointed out that this is not the first recent case of scientific research to suggest that the "forever chemicals" may not actually need to last forever.

"There was a recent paper in Science that described a very efficient way [to] break down PFAS. I'm sure there are others in the pipeline as well, since this is such an important environmental and human health concern."

"There was a recent paper in Science that described a very efficient way [to] break down PFAS," Costello observed, referring to a study which found certain types of PFAS can be broken down with the solvent dimethyl sulfoxide when mixed with a cleaning reagent. "I'm sure there are others in the pipeline as well, since this is such an important environmental and human health concern."

Because there are so many different types of PFAS, it is unlikely that a single method of eliminating them will work for every version. That said, any progress in eliminating chemicals like PFOS and PFOA is bound to be helpful if it can be mass produced. That, naturally, is the next step.

"We are working towards commercialization and scaling up this technology," Liu wrote to Salon.

As for destroying the other types of PFAS chemicals, it is going to take time for scientists to develop the necessary technology to accomplish that.

"In terms of PFAS destruction, we still need research into the ways we might implement this technology at places like water treatment facilities," Costello observed. "We also will need to make sure any new methods to remove and destroy PFAS are sustainable and work well on all PFAS chemicals."

It will also be important for scientists to come up with ways of eliminating combinations of PFAS, and not just PFAS in isolation. After all, most people who are exposed to dangerously high levels of PFAS are encountering a number of PFAS at once, not individually. Dr. Sandra Søgaard Tøttenborg of the University of Copenhagen made this observation when discussing her study earlier this year linking pregnant women's PFAS exposure to poor semen quality among their assigned male offspring.

"Earlier studies of PFAS exposure later in pregnancy have focused on single substances, which is an unrealistic scenario considering that chemicals are embedded into virtually every aspect of our modern lives," Tøttenborg explained. "The study [on semen quality] showed a statistically significant association between exposure to a mixture of PFAS in early pregnancy and lower sperm concentration and total sperm count and higher proportion of non-progressive and immotile sperm."