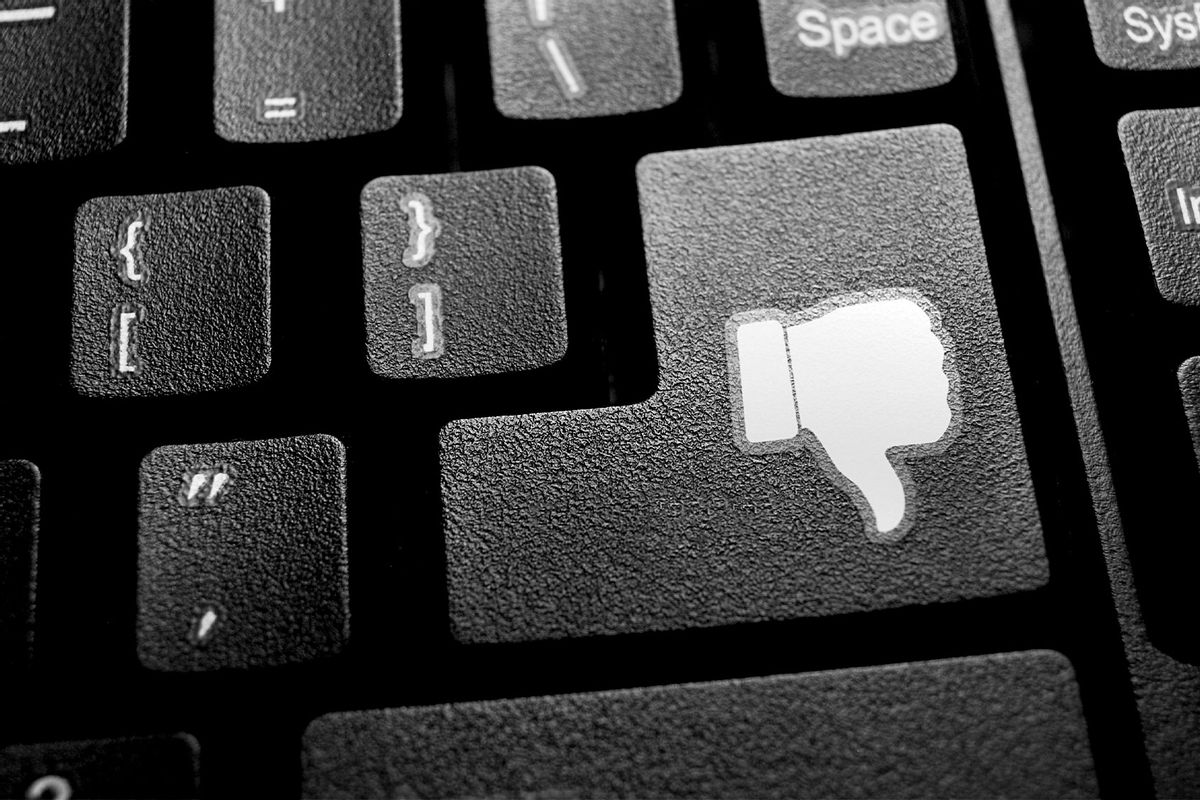 Thumb down or dislike button on keyboard (Getty Images/fongfong2)
--

As a left-leaning journalist who spends substantial time online, I must confess that I find it increasingly difficult to take a side in the seemingly endless "woke wars." On one hand, few people are more annoying than those forever aggrieved over the mostly mythical "cancel culture." That obsession is certainly not limited to the right: Fear of "cancellation" has sunk its claws into legions of people who otherwise might view themselves as progressives. "Cancel culture" trolls like Bari Weiss make money not just off conservatives who refuse to own the label, but stalwart Democrats who never get tired of cancellation horror stories, most of which are false, or at least highly exaggerated.

Almost invariably, the supposed threat to "free speech" turns out to be little more than a boss discouraging a middle-aged white librarian from making a "rap video" about orientation. Or students complaining that limp cafeteria pulled pork is not actually "banh mi." The epitome of this, of course, comes in the form of J.K. Rowling, Elon Musk and Dave Chappelle imagining themselves as the 21st-century equivalent of Rosa Luxemburg because people tell them that it's gross to be transphobic.

Those people suck. But if you've ever put a digital toe onto Twitter, it is also undeniable that woke bullies are not entirely figments of the reactionary imagination. Earlier this month, Vox reporter Rebecca Jennings wrote a searing article titled "Every 'chronically online' conversation is the same," which documented some of the atrocities: A woman bombarded with accusations of elitism and singleton-shaming for saying she enjoys having coffee with her husband. A woman shamed for supposedly flaunting "privilege" because she used a grocery delivery service. A musician called "ableist" because she asked audiences to be present at her shows, rather than recording the whole thing on their phones. And, my favorite, "a 21-year-old Redditor being accused of 'grooming' her 20-year-old boyfriend." It made me laugh, but also cry, because I've certainly been subject to this bullshit in the years I've been on Twitter.

(That the overly woke prefer female victims is noteworthy, but a topic for another time.)

Alas, there's a lot of pressure to choose sides. In our social media-dominated age, nuance is not allowed, and certainly not when it comes to the woke wars. Either you deny there are bullies who use social justice as a fig leaf, or you agree that everyone is in imminent danger of social ruin for forgetting to indicate their pronouns. There's no room for the boring truth, which is that both sides sometimes have a point and also that both sides are guilty of wild exaggeration.

It's probably just wishful thinking, but I'd love it if 2023 became the year that we finally say goodbye to all this. Let this be the year of letting go — both of the pressure to fly into a panic over "cancel culture" or to deny that Twitter is rife with jerks who hide their sadism behind a veneer of social justice. This idiotic merry-go-round exists in large part because social media profits handsomely from fights where nobody wins and everybody is wrong. But collectively, we have the power to disengage, and to deprive the woke wars of their power.

Elon Musk's "blue check" debacle: His brain has been broken by whiny incels

I had this revelation watching Jennings discuss her article with Jon Favreau on the podcast "Offline," as well as reading an essay Jennings recommended, "Fuck Puritanism" by P.E. Moskowitz. Both focused — accurately, in my view — on the psychology of woke bullies, depicting them as people driven by insecurity, hopelessness and social isolation. "[P]eople who have adopted this kind of newfangled religious obsession with perceived moral offense are in denial of what they actually want," Moskowitz writes. Especially for people struggling with social anxiety or loneliness, browbeating others on Twitter feels like an easy way to get attention and feel powerful, without having to engage people authentically or, heaven forbid, actually leaving the house.

That's when it hit me, though: The chronic complainers about "cancel culture" are no different. It's one thing to laugh at internet weirdos who think it's "ableist" to read books or "classist" to rent an apartment with a washing machine. But the anti-woke faithful fold these stories into a self-righteous narrative in which they are the sole defenders of free speech, in the face of Stalinist terror. Never mind that in the real world, most people don't know or care some rando on Twitter condemned Anne Frank for "white privilege." The anti-wokers have a story about how they alone can defeat the censorious left — um, apparently by bitching about them online.

This was driven home even more after I read the New York Times quiz purporting to discover "what a well-meaning person can say without offending someone." The neologisms invoked were exclusively the ones the anti-woke crowd associate with leftist overreach, such as "chest-feeding," "pregnant people," or "primary bedroom" (that one is instead of "master bedroom"). Right-wing signaling phrases like "cancel culture," "fake news" or "globalist elite" were ignored. The purpose here was clearly not a good-faith interrogation of shifting linguistic norms, but an attempt to provoke another round of "Has the left gone too far?", driving outrage on both sides — and traffic to the New York Times.

On "Offline," Jennings flagged one of the most bizarre Twitter shitstorms, in which a woman (it's almost always a woman!) was dogpiled for making a joke about a friend who didn't know how to chop tomatoes. She was accused of elitism and ableism for assuming that knowing how to chop vegetables is a simple skill grown-ups ought to master. Then, of course, there was another cycle of outrage over the outrage, and things got uglier — while engagement soared.

While hearing Jennings recount this story, it occurred to me that most of these woke warriors were probably just jealous of the original tweeter — she has a close friend she feels comfortable enough with to tease about her lack of tomato chops. That made it a lot harder for me to feel mad at them. Instead, I felt sorry for them — I hope they get the help they need, and find friends of their own. By the same token, a lot of people who are super worked-up about "cancel culture" are also isolated and anxious about being left behind in a changing world.

Both sides in the woke wars exaggerate the size and scope and impact of the other side, in order to tell a tale about their own martyrdom. It's exhausting. But we all have the power to turn down the temperature. You don't have to summon that much empathy to remember that a lot of annoying people are just acting out.

Not every provocation deserves a response. False accusations of bigotry and over-the-top hysterics about "cancel culture" can be met with an eyeroll or by pressing the "mute" button. Better yet, close the app or the browser window. Read an article — or maybe even a book! Take a walk. Have a real conversation with an actual human. Call a relative. You'll soon find out that, freed from the algorithm that encourages sanctimonious posturing and pointless conflict, much of what seems so important on social media actually doesn't matter at all.

Modern capitalism has created an epidemic of isolation and loneliness, dramatically compounded by a pandemic that most of us, at least socially speaking, are still trying to recover from. The internet can too easily create an illusion of connection, when all it's actually doing is drawing out our most suspicious and antisocial sides. On the right, this manifests in the widespread embrace of ever-stranger conspiracy theories like QAnon. But on lefty social media, we're suffering through a crisis of empty piety, where people get attention by dunking on each other for being either too woke or not woke enough. Now that Elon Musk's Twitter has made a point of showing users how many views a tweet gets from people who don't engage, users may be even more inclined toward provocation and antagonism.

I was already scaling back on my Twitter time — or trying to, anyway — when Musk finalized his purchase on the company. Since then, I've put myself on a stricter Twitter diet. One major benefit is that the woke wars have begun to fade into the background. I get yelled at less for perceived excesses or deficits in my political correctness. Offline, I find that people are funnier, more relaxed and less worried about performing moral superiority. They are kinder, and more forgiving. It's rare to identify a problem that literally goes away because you start ignoring it, but the online warfare over wokeness is one of them.