As long as the money flows and legal sanctions don't, Trump and his allies see no reason to quit 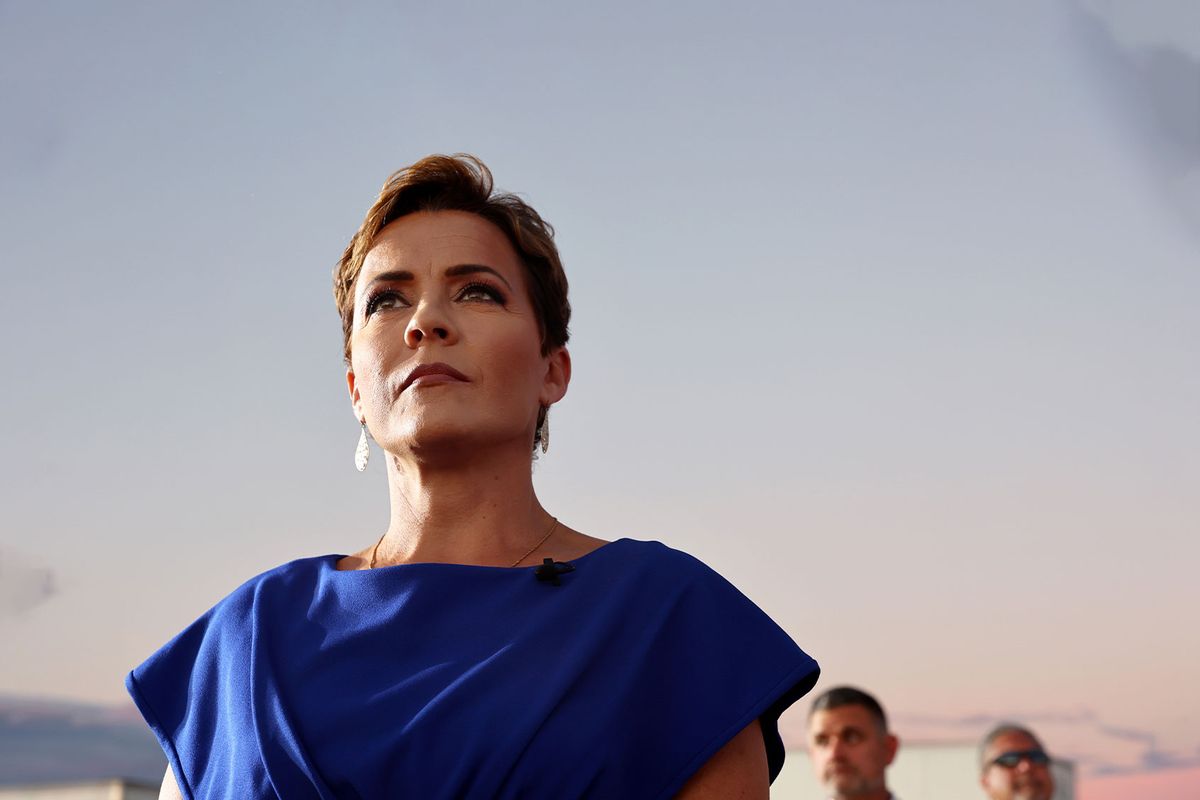 One thing seems certain: Kari Lake is not giving up. The Big Lie-spouting GOP candidate for Arizona's governor's seat lost another frivolous lawsuit challenging her loss over the weekend. Lake just kept posting through it, crowing about how the "People want Justice" and that she will keep up the fight against her loss in the courts. She even tweeted a conspiracy theory early Monday accusing the judge of letting "left-wing attorneys" ghost-write his opinion for him. Around the same time, election officials and the Democrat who won the election, Gov.-Elect Katie Hobbs, filed a request that the court formally sanction Lake for her relentless abuse of the courts.

"Enough really is enough," the request reads. "It is past time to end unfounded attacks on elections and unwarranted accusations against elections officials."

The move was celebrated by democracy proponents who believe, correctly, that insurrectionists like Lake and her mentor, Donald Trump, will continue to launch attacks on democracy unless they start to face real consequences. Lake's stubbornness has been alarming, in no small part because she appears to be doing this mainly to curry favor with Trump. Even if she doesn't succeed in convincing a court to just hand her the lost election, her quest will only help boost Trump's mood and stiffen his spine for what is widely expected to be another attempt at stealing the White House in 2024.

This is why it is so troubling that the judge declined to sanction Lake late on Tuesday, claiming that the lawsuit was not "brought in bad faith."

This lack of legal consequences emboldened Lake immediately. She let loose a storm of social media posts promising she won't "back-down to tyrants" and "She's seeing this through."

The judge's claim to believe that Lake's lawsuit was filed in good faith is, frankly, a bit hard to swallow, and not just because she deleted false accusations about the judge in an apparent effort to avoid sanctions. The case itself was a total clown show. As Kate Riga of Talking Points Memo reported, Lake's lawyers didn't seem to know the basics of arguing in court. They tried to call a witness who wasn't on the witness list and introduce an audio clip as evidence that had not been verified in any way. The lawyers for Lake leaned heavily on conspiracy theories that the actual expert witness called by the Maricopa County lawyers punched right through.

"No data to support any of those claims": Expert trial witness demolishes Kari Lake's case

If the judge is reluctant to sanction the plaintiff, that's understandable. The concern is always that such things could have a chilling effect on lawsuits brought by legitimate whistleblowers. In the Before Trump times, in fact, it would always be better to see a judge err on the side of letting these things get hashed out in court. But Lake's yee-haw response, complete with a bad meme of her hanging out with Steve "When Does He Serve His Sentence Again?" Bannon, is an ugly reminder that going easy on coup plotters will be read as an invitation for them to keep trying until they succeed.

Few have read much of the full report released by the House committee to investigate the events of January 6, which was released right before the Christmas holiday. But even a minor amount of engagement is a chilling reminder of how Trump and his allies have no compunction about doing whatever it takes to get and maintain power, mostly because they don't fear consequences for trying.

"If I do this, what do I have to lose?" Trump was reported saying to a Justice Department official during the efforts to overturn the results of the 2020 election.

According to the new report, Trump's legal mastermind behind the coup plot, John Eastman, knew what he and Trump were plotting was illegal. Eastman had been pushing this idea that then-Vice President Mike Pence had the "exclusive authority and sole discretion" to throw out any electoral votes he wished. This idea excited Rep. Louie Gohmert so much that he offered to sue Pence in order to force him to throw out votes for Joe Biden. Eastman objected to the lawsuit, the report explains, because "there was a 'very high' risk that the court would issue an opinion stating that 'Pence has no authority to reject the Biden-certified ballots.'" Instead, Eastman repeatedly suggested that the best strategy would be to go forward with the plot to steal the election and "let the courts sort it through" later.

As University of Alabama law professor Joyce Vance told Chris Hayes of MSNBC Tuesday night, it's easier to "beg for forgiveness than ask for permission. He knew that if he asked for permission in advance, he would be told no."

Trump and his allies obviously thought the entire effort to steal the election was a can't-lose proposition. If they succeeded, they would hold the power and there would be no chance of consequences. But even if they failed, the bet was that it was too much trouble for federal law enforcement to hold them accountable for trying.

Two years later, that gamble is paying off nicely. The political and logistical headaches for holding Trump or any of the other high-level coup plotters accountable have, indeed, prevented Attorney General Merrick Garland from arresting any of them. That's why the January 6 committee went out of its way to make criminal referrals for Trump and Eastman. As Rep. Bennie Thompson, D-Miss., said, the only thing that will stop Trump's future attempts is "accountability that can only be found in the criminal justice system."

This really is a "why not keep trying" situation for Trump and his allies. Call it a forever coup, with some part of the larger plan to seize power always in motion. They don't lack resources, for one thing. On the contrary, the forever coup is quite profitable. As the January 6 report shows, the Big Lie has opened the spigot for "an unprecedented amount of political donations," with "much of it from small-dollar donors who were promised their money would 'Stop the Steal.'" Mostly, however, the money went "to fund the former President's other endeavors and to enrich his associates." Lake's never-ending efforts to steal the Arizona election look to be more of the same. Her "Save Arizona" fund is steadily raising money. There's even an option to become a monthly donor, hinting at the indefinite nature of this attempted coup.

Trump may seem a little down these days, in part because the midterm election did shut down his main pathway to stealing the 2024 election. But he's running again, and there's little reason to believe he and his allies won't return to brainstorming shiny new ways to take a run at another coup effort. The odds of there being no downside to trying don't seem to have changed much. The money keeps flowing. The criminal referrals were headline-grabbing, but have no power to make Garland do anything. While the midterms were a disappointment, it's also a fair bet that the public's efforts to resist Trump's machinations are limited by time and energy. With nothing but money and time on their side, people like Lake and Trump are smart to believe that success may just be a matter of outlasting their opponents. The only thing that could change the equation is prison. But without that threat, there is literally nothing to keep Trump and Lake and other insurrectionists from chipping away at democracy until it's gone.