Arizona's biggest loser can't overturn the election. But she can raise tons of money and serve her cult leader 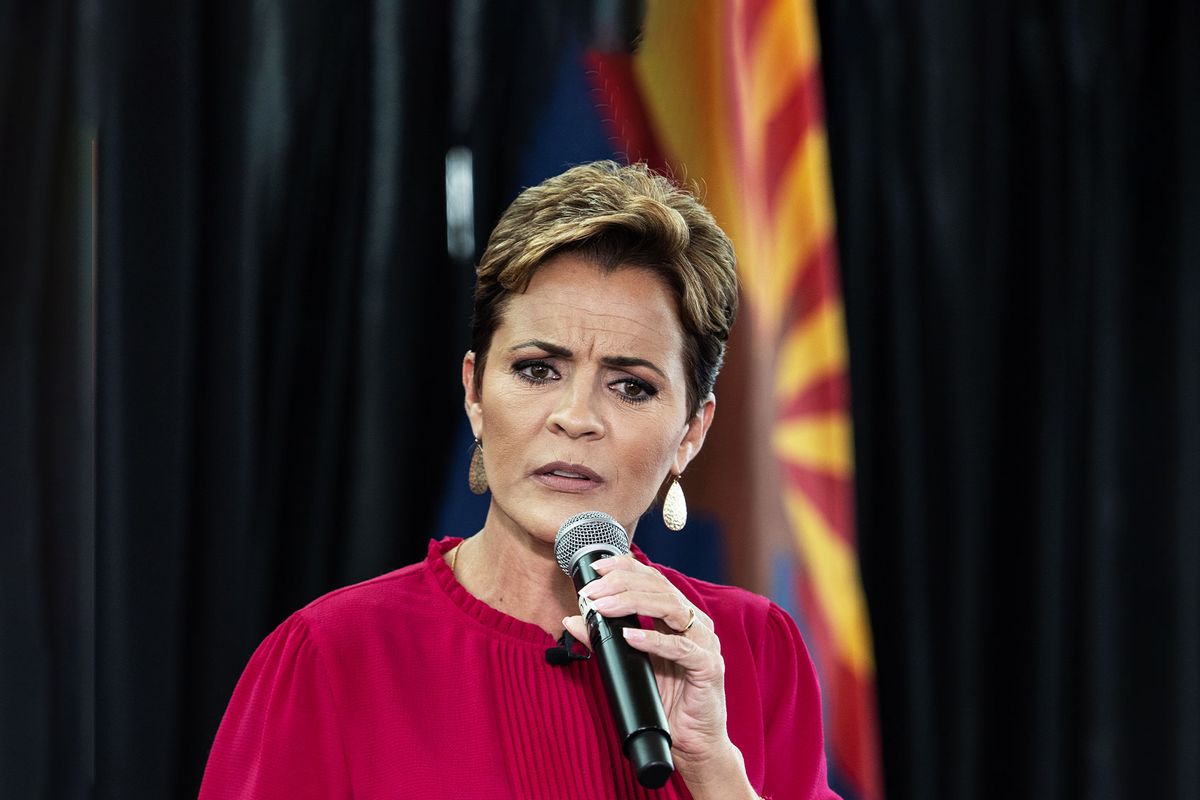 Failed Arizona gubernatorial candidate Kari Lake — who despite her defeat may yet be a Republican vice-presidential contender — has filed a new lawsuit ostensibly aimed at reversing her loss to Democrat Katie Hobbs. Lake appears to be going for a hat trick of courtroom defeats, which remains no match for her idol, former President Donald Trump, who lost more than 60 cases after the 2020 election.

The first of Lake's lawsuits, filed earlier this year, was dismissed in August. It sought to replace Maricopa County's voting machines with paper ballots.

Here's the clincher: In a new order on Dec. 2, federal Judge John Tuchi described the complaint as filled with "false, misleading, and speculative allegations."

Lake and her co-plaintiff, defeated Republican secretary of state candidate Mark Finchem, were ordered to pay Maricopa County's court costs for having to defend the frivolous suit. Her lawyers — who apparently  included former Harvard Law professor and Trump lawyer Alan Dershowitz — were sanctioned with their own fines.

Then came Lake lawsuit No. 2: On election night in November, an Arizona judge rejected a suit that she filed with other Republicans, finding "no evidence that any voter who appeared to vote at Maricopa County polling places was turned away from the polls."

Kari Lake goes out with a whimper: She couldn't galvanize Trump's Jan. 6 army

And now she's back, filing another suit last Friday making the same claim all over again. ABC News called it a "lawsuit riddled with falsehoods." There were rehashed attacks on mail-in ballots, There was plenty of rank speculation — something courts never accept — that signatures initially identified as possible mismatches might have been improperly accepted after review. There were paragraphs recounting discredited 2020 election allegations from a right-wing PAC, We the People AZ Alliance.

And here's a juicy piece of poetic irony about Lake's claims that her voters were disenfranchised. The Democracy Docket website run by Marc Elias, a leading voting rights lawyer, has pointed out that many of the complaints from voters who claim they couldn't cast their ballots arose because of Arizona's HB 2237, the Republican-sponsored bill enacted last May that erected new barriers to the ballot in an apparent effort to suppress the vote.

A political party hoisted, as the saying goes, on its own petard.

Does Lake truly believe that with her election litigation, the third time's the charm? That's highly doubtful.

She surely knows that courts don't overturn elections where the loser fell short by more than 17,000 votes. In all likelihood, the point isn't to win. It's to keep her face in front of her audience and to dial for dollars.

Her party's de facto leader has taught her well. In today's Republican politics, fiction sells. Lake will flood social media with messages asking for help paying her lawyers. Trump has demonstrated how well that can work to suck in small-donor cash.

Lake has learned well from her party's de facto leader: Fiction sells. Flood social media with pleas for "legal defense," suck up small-donor cash and propel herself toward Trump-Lake 2024.

She hopes to use the attention and the money to help propel her toward Trump-Lake 2024. Lawsuits are part of her Phoenix Fox 10 TV approach, what one adviser called her instinct to "sensationalize everything."

Here's the disturbing part: Her suit is just the latest in election denialism, rumors of whose demise are greatly exaggerated.

But more than 170 election-deniers won, like Ron DeSantis, Kevin McCarthy, Jim Jordan, Marjorie Taylor Greene and Paul Gosar. Get ready for a tent revival of denialism in the new MAGA House majority as it ramps up endless Benghazi-style hearings.

It's all part of the run-up to 2024. Trump will dominate the party at least until then because, as the former George H.W. Bush speechwriter Peggy Noonan put it in the Dec. 10 Wall Street Journal, "only the voters can crush Mr. Trump."

To keep that from happening, he, Lake and their allies will work overtime. They will subject voters to more and more election lies, including by litigation, amplifying them and trying to sow ever-increasing distrust of the entire electoral process.

And with Elon Musk having doubled down on his apparent strategy to make Twitter a right-wing haven by blasting out conspiracy theories, it may get worse before it gets worse.

Attention must be paid. As Timothy Snyder, the eminent historian of 20th-century totalitarianism, has written, Trumpism threatens our liberty. "To abandon facts is to abandon freedom."

"Post-truth is pre-fascism," he writes.

Trump's call for the "termination" of the Constitution because he was the "rightful winner" in 2020 made the case in a single social media post. He uses court filings the same way.

Lake has jumped into the same swamp. Her suit, like Trump's before her, will get tossed soon enough. But the dollars will flow as if from heaven, thanks to a true-believing audience that never tires, it seems, of being taken.