Kari Lake goes out with a whimper: She couldn't galvanize Trump's Jan. 6 army

Katie Hobbs was certified as Arizona's next governor, as Kari Lake's mini-Trump act fizzles out in MAGA frustration 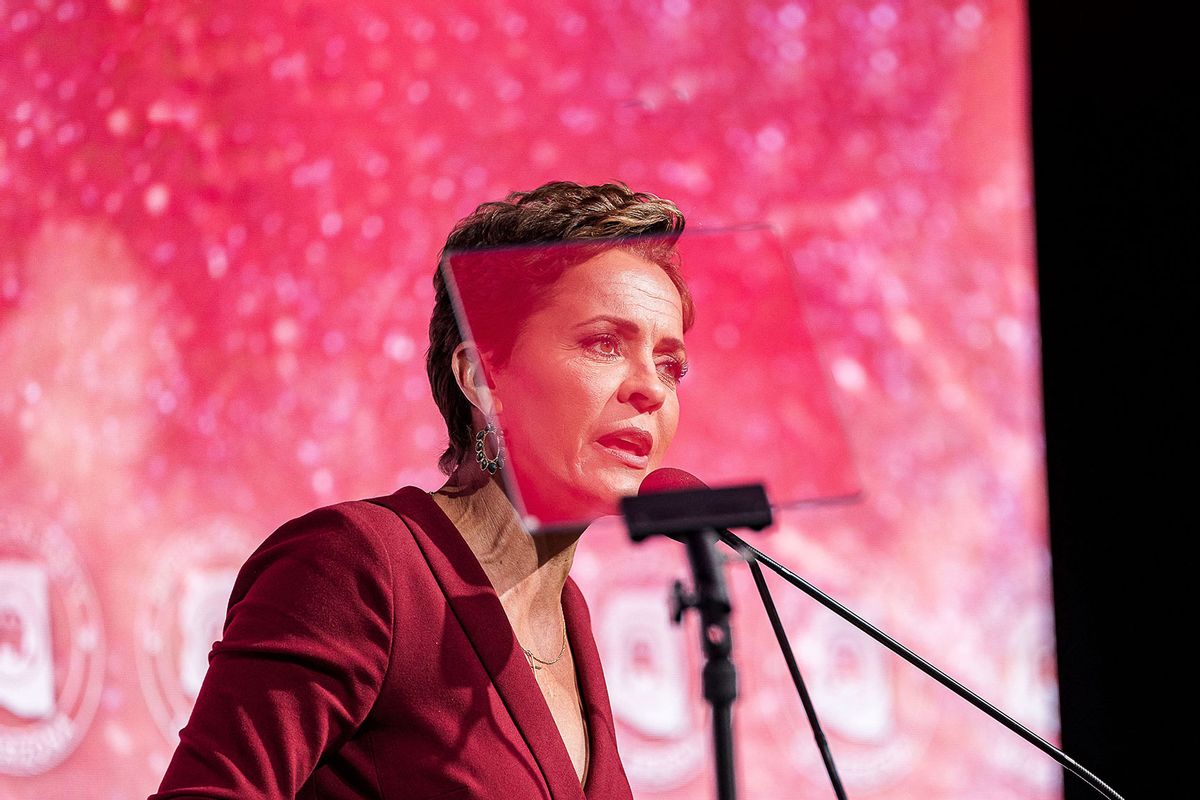 In the end, the Big Lie 2.0 went out with a whimper, instead of the bang Donald Trump and his acolytes were clearly anticipating. For months, Trump-loyal Republican candidates for state and local offices — often those hand-picked by Trump himself — recycled his false claims that a secret cabal of Democrats had secretly created a system to "steal" elections from Republicans. Not only did MAGA superfans like Arizona gubernatorial candidate Kari Lake argue that Joe Biden had somehow stolen the 2020 from Trump, they repeatedly suggested that, should they lose in 2022, that should be presumed illegitimate as well.

There was plenty of cause for worry that all these conspiracy theories were building toward some kind of Jan. 6 redux, especially as several of these candidates had direct ties to the original assault on the Capitol. Pennsylvania state Sen. Doug Mastriano, the GOP gubernatorial candidate, wasn't just at the Capitol that day, but literally paid for charter buses to send Trump supporters to the rally that turned into an insurrection. Tim Michels, the Wisconsin Republican running against incumbent Democratic Gov. Tony Evers, promised that "Republicans will never lose another election in Wisconsin after I'm elected governor." Mark Finchem, the Republican candidate for secretary of state in Arizona, was also in D.C. on Jan. 6 and his attorney was deeply involved in the "fake elector" plot Trump hoped he could use to steal the 2020 election.

In the days before the election, Homeland Security and the FBI circulated a memo warning of a "heightened threat" of election violence that might target "candidates running for public office, elected officials, election workers, political rallies, political party representatives, racial and religious minorities, or perceived ideological opponents."

Instead what happened, for the most part, was nothing, thank goodness. Most of the Trumpy candidates seeking swing-state offices that would give them control over the 2024 presidential election lost. They complained but mostly didn't try to fight the results. And none of them actually incited violence in an effort to steal those elections. Maybe that's a modest win for democracy, but it counts.

There was one holdout. Lake, who was a local news anchor in Phoenix before becoming the MAGA-tastic candidate for governor, stood out as something special in the highly competitive field of midterm election deniers. When asked by CNN in October if she would accept an electoral defeat, Lake gave the kind of trolly answer that makes Trumpist hearts soar: "I'm going to win the election and I'll accept that result."

Well, she didn't. Lake lost that election narrowly to Democrat Katie Hobbs, the current secretary of state. Unlike most of her fellow election deniers, Lake has created a public fuss since election night and, along with Finchem, has filed a number of frivolous lawsuits seeking to invalidate or overturn the election. But although Lake certainly tried to adopt Trumpian tactics — whining incessantly and shotgunning all kinds of irrational or ludicrous litigation into court — the whole effort has felt surprisingly tepid. Even Trump's attempt to get involved, by releasing a statement demanding that Lake be "installed" as governor for some imaginary reason, did little to generate any real momentum.

On Monday, Lake's moribund coup effort fizzled out as Arizona officials certified the election in a placid document-signing ceremony, utterly free of screaming Proud Boys trying to smash in cop heads or hang election officials. Sure, Lake is trying to save face with endless tweets about a "crooked election," and still shows up to bellyache on Steve Bannon's podcast. (When does his sentence start again?) But she's almost certainly reached the end of the road. Even the two Republican-controlled counties who initially refused to certify the election finally capitulated to reality and court orders, and did their duty.

It's amusing, of course, to watch Lake flail about impotently. But it does raise an interesting question: Why has it been so difficult for the myriad mini-Trumps of the 2022 midterms to build on his Big Lie? Why was he able to make Jan. 6 happen, but none of his followers have even come close to replicating that moment on the state or local level?

It's tempting to write this off to the structural differences between a national election and smaller, more spread-out state-level elections. Trump could draw on his fame and his enormous fanbase to get attention, and also on the singular, symbolic nature of the Capitol building and nation's capital draw a big crowd in one place on one day. But that explanation leaves something to be desired, because it's also true that it would be easier, in many ways, to stage a more localized insurrection. You would only need a modest-size group in a less secure location, such as a state capitol, to pull off a violent assault on a smaller scale. Just look at how successful far-right groups have been at dominating or disrupting school boards or intimidating drag performers over the past couple of years. You wouldn't need the thousands of people Trump drew to the Capitol in January 2021 to do serious damage. A few dozen right-wing militia types — as in the Michigan lockdown protests of 2020 — would likely be enough in some places.

No, I suspect the real reason the Big Lie is failing to incite fascist violence around midterm elections is that few, if any, Republicans actually believed the Big Lie in the first place. It was always a pretext for what its proponents really want, which is a movement to replace the process by which we choose American presidents with a dictatorship, ideally led by Donald Trump himself. Installing a bunch of mini-Trumps in state offices, even for the purpose of supposedly setting Trump up to steal the 2024 election, doesn't have the emotional power of an actual, no-BS, top-down fascist revolution.

"We're not just going to call them 'election deniers.' They are MAGA fascists," Adrian Fontes, the Democratic winner of Arizona's state secretary position, said on MSNBC on Tuesday.

This distinction isn't just rhetorical flair. "Election deniers" implies that the conspiracy theory of stolen elections is the primary motivation of Trump's insurrectionist movement. But really, the conspiracy theory is just a paper-thin excuse, one which Trump and his minions barely even try to establish as a functioning narrative. Fascists, as John Ganz writes in his most recent newsletter, "believe things have gotten so bad that only a radical move to break the present regime can save the nation." Taking the White House by force is satisfying. Taking the Arizona governor's mansion, not so much.

The fascist cult leader — and in this case you know who that is — draws his power from being the avatar of all his followers' grievances, which are mostly about social and cultural issues and not really about a sincere belief in "election fraud." The anger that drew people to the Capitol on Jan. 6 had nothing to do with any genuine concerns that Democrats had corrupted the election. It was driven largely by cultural grievances: Growing racial and religious diversity. Women's increasing independence. Rap songs dominating the radio and LGBTQ characters on TV.

The Big Lie was just the excuse. The goal was to punish non-MAGA Americans by inflicting Donald Trump on them against their will.

That anger has more recenlty been rerouted into more direct expressions of right-wing cultural resentments, which is why we're seeing attacks on Pride events and hysteria about "wokeness" or "critical race theory." Having a tantrum, or staging a riot, over Kari Lake losing her bid to be governor of Arizona simply doesn't have the same emotional resonance. Even if such a coup had been successful — a pretty big "if" in a moment when Democrats still control the executive branch of the federal government — it wouldn't have done much to address the larger complaints that fuel modern fascism. Lake talked a big game about being the media's "worst fricking nightmare," but even if she had successfully wedged herself into the governor's mansion, the "liberal coastal elite" media would still have viewed her as a backwoods novelty, rather than a real threat.

The symbolism and power of the presidency is what makes it a prize worthy of violent insurrection. A governor's seat can't hold a candle to that. That's probably the biggest reason why the MAGA movement that was ready to crack skulls on Jan. 6 didn't get out of bed to protest lost midterm elections. The good news here is that the Big Lie 2.0 failed to rile up Trump's jackass army in 2022. The bad news is that while Kari Lake fell on her face in trying to get the MAGA masses outraged on her behalf, those people could potentially be moved to violence again, if they think that means putting their true cult leader back in the White House.