Republicans badly underestimated Joe Biden — and in his first two years in the White House, he's driven them nuts 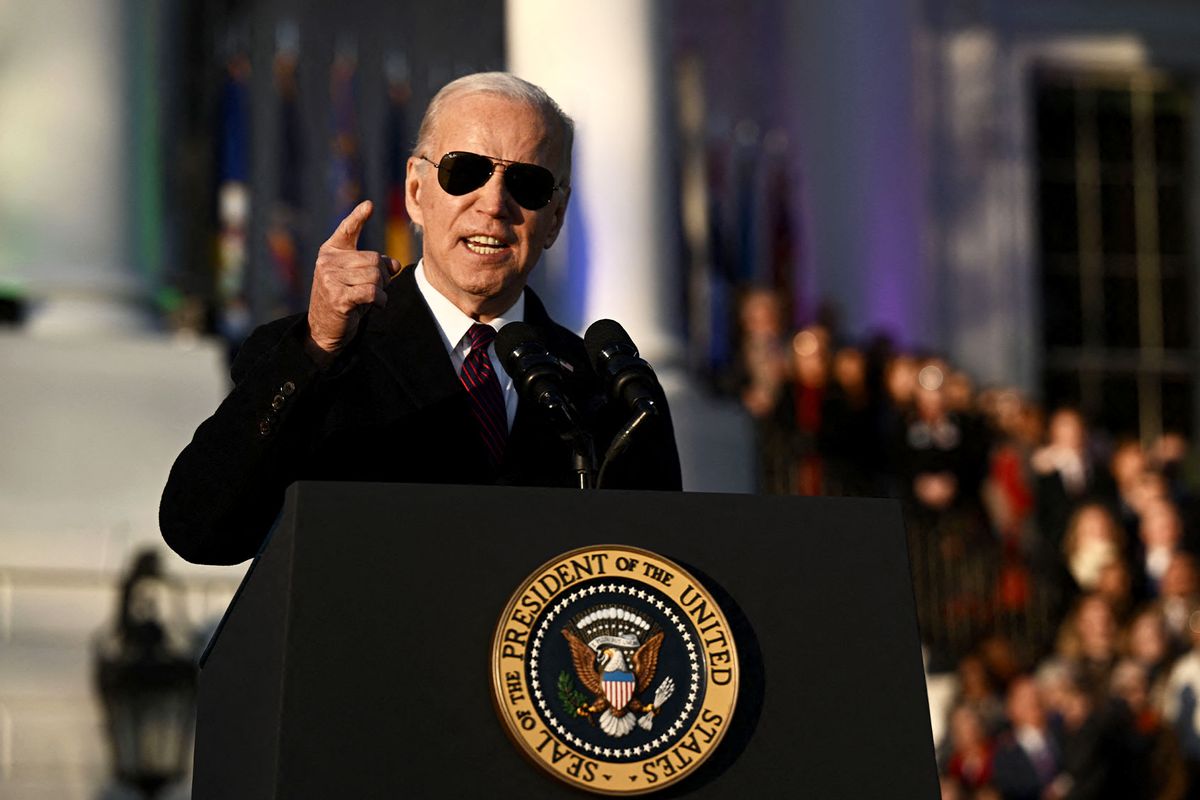 US President Joe Biden speaks on the South Law of the White House in Washington, DC on December 13, 2022. (BRENDAN SMIALOWSKI/AFP via Getty Images)
--

When the 2020 presidential campaign was lurching into gear three years ago, former Vice President Joe Biden had led in the polls for months. Still, everyone kind of assumed he was a placeholder, a former office-holder with high name recognition whose campaign would nevertheless go the way of his two previous presidential bids, meaning nowhere. He was dull as dishwater compared to many of the others vying for the nomination, and nobody had ever really considered him presidential timber.

As the campaign took off, other candidates were winning in the early states even as Biden still led in national polls. Bernie Sanders and Pete Buttigieg looked like the major contenders after Iowa, New Hampshire and Nevada, states where Biden did poorly. Then he pulled off a sweeping victory in South Carolina and shortly thereafter the race was effectively over. He went on to win the rest of the primaries handily. America was reeling during the traumatic first year of the pandemic and there was a sense that Democrats were happy to have the race settled so they could concentrate on taking down Donald Trump, which was considered Job One by every faction of the Democratic coalition.

Even so, nobody expected much of Joe Biden. He had his charms, but he was a longtime creature of Washington with an anachronistic fetish for bipartisanship. All we could realistically expect, it seemed, was some relief from the chaos and a reliable, experienced staff to help right the ship. When the Democrats barely held onto the House and squeaked out a 50-50 Senate "majority" (thanks to the runoff elections in Georgia and Trump's constant whining) everyone assumed that the Democratic agenda promised during the campaign was pretty much dead. The best we could hope for at that point was to stop the bleeding and live to fight another day.

Will the ghost of Eugene McCarthy haunt Joe Biden's path to re-election?

But Biden has turned out to be full of surprises. Rather than just acting as a kindly old caretaker president until the new generation can take the wheel, his administration has been a flurry of activity, passing more Democratic domestic legislation than any president since Lyndon Johnson in the 1960s. To name just a few, he signed into law the huge American Rescue Plan in the spring of 2021 (with no Republican votes); the $740 billion Inflation Reduction Act, with massive investments in climate policy and health care; the $280 billion CHIPS Act, funding a vital semiconductor industry in the U.S.; the PACT Act to help veterans; and the first federal gun control legislation in almost 30 years. In the big omnibus spending bill just passed during the lame-duck session, he got the Electoral Count Act included as a step toward avoiding another Jan. 6 debacle. Finally, Biden pushed through and signed the Respect for Marriage Act, offering at least some protection to same-sex couples against the inevitable assault from right-wing judges and legislators. Some of that legislation was even bipartisan, which seems like something out of an old black-and-white movie at this point.

These achievements really are impressive, and even more so because of the need to accommodate the two Senate divas — Joe Manchin and Kyrsten Sinema — who needed to be the center of attention at all times and who were unfortunately crucial to passing legislation. It was often torturous watching the Senate sausage-making, with Biden himself often appearing unable to manage the negotiations despite his alleged mastery of the process. But somehow it worked.

A lot of important items were left on the cutting room floor, of course, largely due to the aforementioned Diva Twins: No voting rights reform, no new child tax credit and no subsidies for the elderly. There are a dozen other worthy programs I could name. Important tax legislation was nixed by Sinema for inexplicable reasons. Nonetheless, what remained is substantial and meaningful, and frankly kind of miraculous considering the narrow Democratic majority and the toxic political climate.

Biden quietly led the party to those major wins but a lot of the credit must go to the Democrats in both houses who clearly appreciated that they had a unique opportunity to get things done before the batshit GOP regained some power. I wouldn't have bet on that happening either.

Biden has also been getting federal judges confirmed as quickly as possible, outpacing both Obama and Trump. Just as important, these judges are all highly qualified (unlike the crew of misfits the Trump administration put forth), and are the most diverse group in history: Three-quarters are women, two-thirds are people of color and 11 are former public defenders, which is more than the number appointed by all previous presidents combined. As he promised, he nominated the first Black woman, the impressive Ketanji Brown Jackson, to the Supreme Court.

As for foreign policy, Biden inherited a global mess after Trump stomped all over the world like an orange Colossus, befriending every tyrant on the planet and treating allies like dirt. Biden has reset many of those relationships and as a result has been able to deftly manage U.S. involvement in Ukraine, unquestionably a delicate and dangerous crisis.

Democrats in both houses appreciated they had a unique opportunity to get things done before the bats**t GOP regained power. Nope, I wouldn't have bet on that happening either.

The withdrawal from Afghanistan, which was proposed by both Obama and Trump but never actually carried out, was messy, but everyone knew it would be. Biden showed admirable resolve in going through with it anyway, even though he was hamstrung by Trump's blunderbuss negotiations, and deserves credit rather than the outrageous moral preening by the press, which suddenly decided it cared about the Afghan people after ignoring them for years. That was a sickening bookend to the rah-rah cheerleading the media delivered when George W. Bush ordered the invasion of Afghanistan 20 years earlier.

Biden also decided, against the advice of the Beltway punditocracy and most Democratic strategists, to use the bully pulpit to fight the Republicans on their extremism and the obvious threat they posed democracy. Biden's critics claimed that people don't care about that stuff and the presidential bully pulpit is a waste of breath anyway. The results of the 2022 midterms suggest that they were full of it and Biden's instincts were correct.

I think some of this success, paradoxically, is because Joe Biden is our oldest president, not in spite of that fact. There's a certain YOLO quality to many people his age which he seems to have channeled into a willingness to take calculated risks that have largely paid off. Dark Brandon's seen it all — he doesn't scare easily.

None other than former Speaker Newt Gingrich issued a warning to his fellow Republicans not long ago that they're making a big mistake if they underestimate Biden and his team. He said that they were being foolish to obsess over Biden's age and need to recognize that they are "up against a very methodical machine which has done a remarkable job. ... When you look at results, you may dislike them philosophically, but you have to be realistic that these people have been effective. And you have to assume that they're going to go into 2024 with a pretty powerful machine, running a juggernaut."

Whether that football-coach analysis is accurate remains up for grabs but there is no doubt that the Biden administration has gotten a whole lot accomplished in two years under exceptionally difficult circumstances. Underestimating this president has been a mistake ever since he entered the race back in 2019.

about the Biden presidency