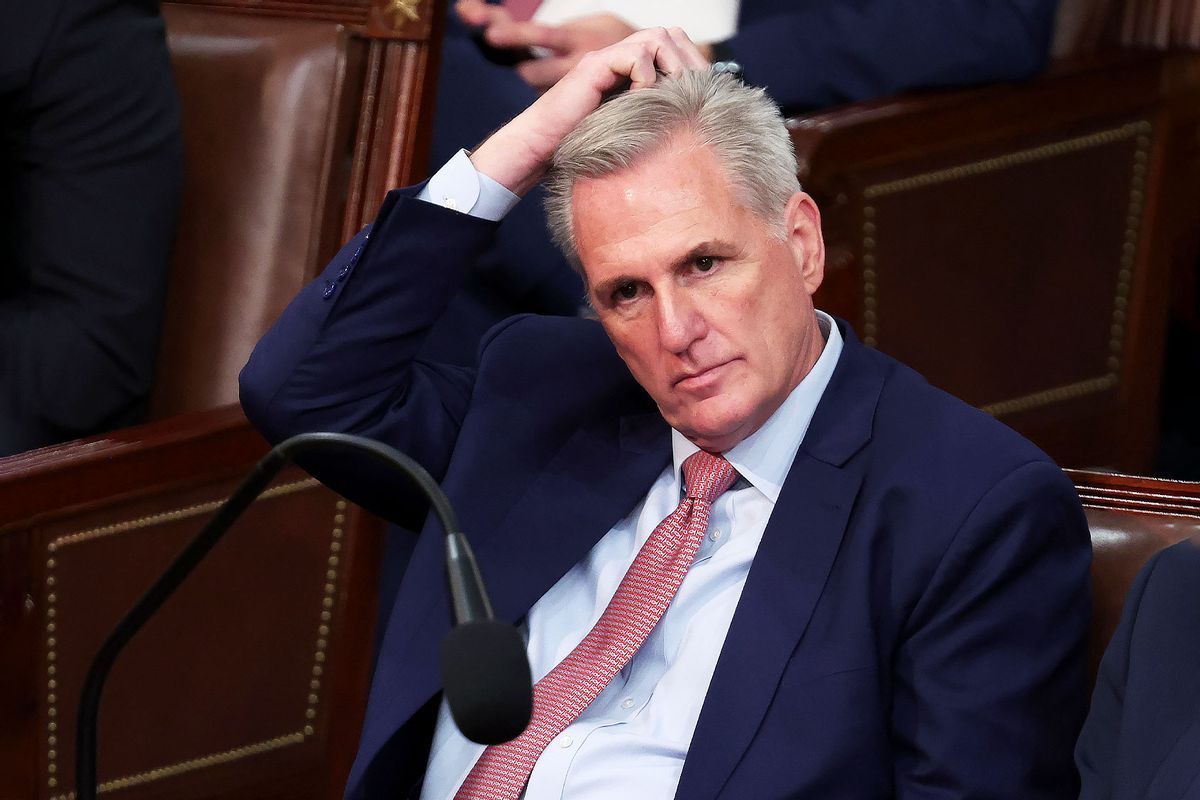 U.S. House Minority Leader Kevin McCarthy (R-CA) reacts as Representatives cast their votes for Speaker of the House on the first day of the 118th Congress in the House Chamber of the U.S. Capitol Building on January 03, 2023 in Washington, DC. (Win McNamee/Getty Images)
--

It's been exactly 100 years since the House of Representatives failed to elect a speaker on the first chamber vote. So much for precedent. On Tuesday, members of the incoming Republican House majority couldn't elect a speaker after three full rounds of voting, marking a historic humiliation for Rep. Kevin McCarthy, of California, the House GOP leader and to this point the only plausible candidate.

The last time the speaker's contest required more than one ballot was in 1923, when it took lawmakers nine ballots to seat Rep. Frederick Gillett of Massachusetts. As NBC News' Allan Smith pointed out Tuesday, contentious speakership elections aren't unheard of. Even the GOP's meltdown on Tuesday is no match for the most brutal race for speaker, which spanned two months and 122 votes, with House control ultimately landing in the hands of the Know-Nothing Party in 1856.

Members are presumably poised for a fourth vote when the return to the Capitol Wednesday and make another effort to launch the 118th session of Congress. Although there's speculation McCarthy may be forced to withdraw, he vowed Tuesday to continue his fight for the speaker's gavel.

"We may have a battle on the floor, but the battle is for the conference and the country," McCarthy said ahead of the vote.

House Democrats, on the other hand, voted unanimously all three times on Tuesday to elect Rep. Hakeem Jeffries of New York, the party's new congressional leader. Jeffries actually finished ahead of McCarthy in all three votes, but there is no plausible scenario in which he ends up winning.

With an evident rupture in the Republican Party and the House adjourned until Wednesday, eyes on the Hill may now turn to the House GOP's second-in-command, Rep. Steve Scalise of Louisiana, a staunch conservative who may be acceptable to the McCarthy skeptics.

In the first two rounds, McCarthy managed to get just 203 of the 218 votes he needed for a majority, with 19 Republican members voting for other candidates. But the dynamics were slightly different each time. Prompted by McCarthy's first-round failure — and the challenge from former Freedom Caucus leader Rep. Andy Biggs of Arizona, who got 10 votes — Freedom Caucus member and staunch Trump ally Rep. Jim Jordan of Ohio rose to call for party-wide McCarthy support.

"We have to rally around him, come together," Jordan said.

That move seemed to backfire after another controversial member, Republican Rep. Matt Gaetz of Florida, rose to nominate Jordan himself, who received six votes in the first round and went on to receive all 19 of the anti-McCarthy GOP votes in the second round.

"Maybe the right person isn't someone who hasn't sold shares of himself to get it," Gaetz said, in an obvious dig at McCarthy's years-long campaign to become speaker.

The McCarthy backlash among a handful of far-right GOP members came on the heels of a reportedly raucous closed-door caucus meeting between McCarthy and the conservative faction. Remarks from Rep. Lauren Boebert, R-Colo., early in the day hinted that there might be rough sailing ahead.

"Everybody knew this would be going on and we're going to work through it," Scalise told reporters, according to The Washington Post.

Before the third round of votes, as rumors spread that McCarthy support was trickling away, Scalise took up Jordan's pleas, begging House members to line up behind McCarthy. There was no Freedom Caucus nomination of Scalise, but Jordan gained one vote (from Rep. Byron Donalds, R-Fla.), receiving 20 votes in the third round to McCarthy's 202.

"We all came here to get things done, big things done," Scalise said Tuesday. "We can't start fixing these problems until we elect Kevin McCarthy speaker."

To this point, Scalise has openly backed McCarthy's bid and avoided any conversations or public remarks about a potential campaign of his own. That hasn't stopped him from being floated as a potential candidate if McCarthy eventually decides to drop out.

Scalise controls a well-known Beltway fundraising machine, has formidable vote-whipping experience and ultra-conservative policies, which would seem to position him favorably among most of the GOP's warring factions. (There may be a few moderates who dislike him, but their power is inconsequential.) He would also be an obvious choice for Republicans eager to avoid a prolonged and embarrassing public battle.

In November, Fox News' Jacqui Heinrich teased the prospect of a Scalise bid on Twitter.

"I would say it is a fair description to say that Steve Scalise could step up and possibly run for Speaker of the House," La Politics Weekly editor Jeremy Alford told Radio New Orleans last year.

Asked by reporters whether he would support a Scalise bid if his own fell short, McCarthy reportedly just laughed and kept walking.

With the Republican Party's disarray on spectacular display late Tuesday, Freedom Caucus members began throwing in the towel for the day. Congress will reconvene at noon EST on Wednesday. Whether it can actually elect a speaker remains to be seen.

CORRECTION: An earlier version of this story incorrectly reported Gaetz' caucus membership. The story has been updated.