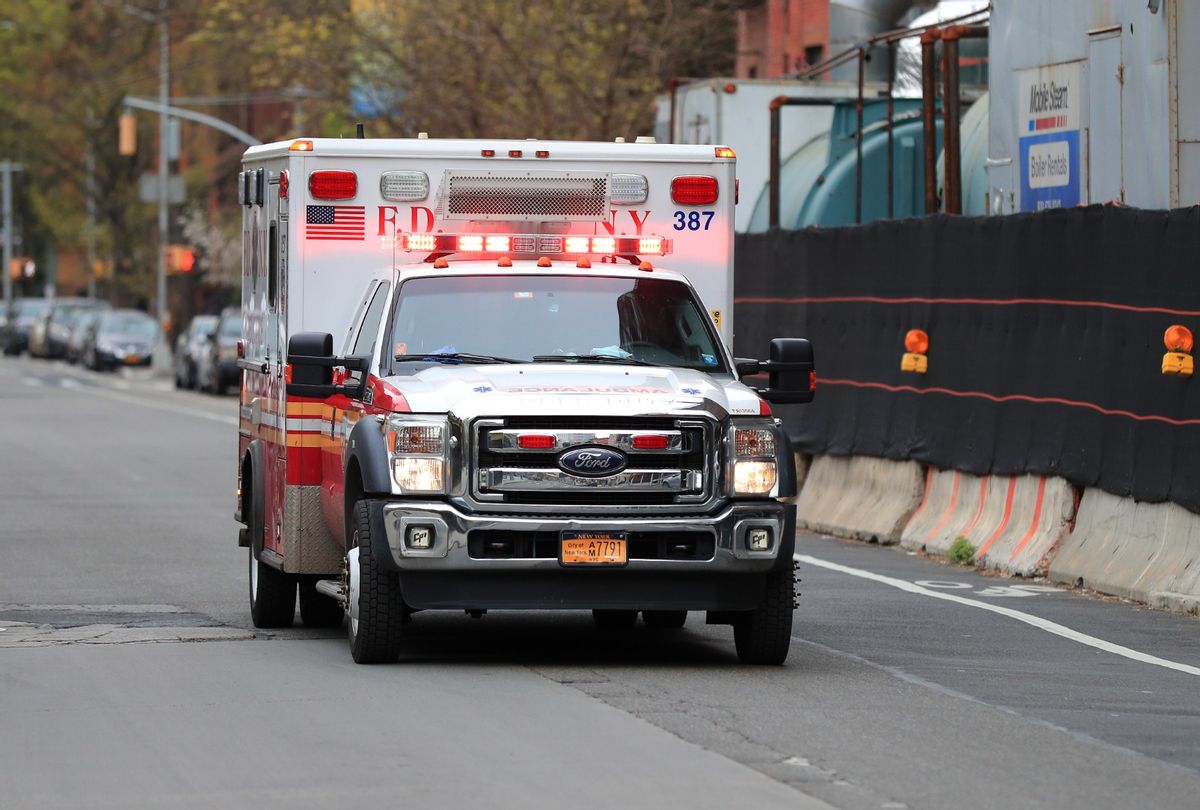 A FDNY ambulance approaches the entrance to the Brooklyn Hospital Center on April 23, 2020 in the Clinton Hill neighborhood of the Brooklyn borough of New York City. (Mike Lawrie/Getty Images)
--

This article originally appeared on Work-Bites

New York City's 911 EMS daily call volume has reached 4,500 on multiple days this month, and FDNY EMS unions warn current staffing is so inadequate three years into the Covid pandemic it puts their members at greater risk while degrading the essential service they provide the public.

Those same EMS labor leaders worry the FDNY's plans next week to reset how EMS members are scheduled could lead to more mandatory overtime, accelerating member burnout and increasing the odds of medical errors.

Union leaders concede last year's 49-month contract deal it reached with the outgoing de Blasio administration made some progress in dealing with the wide pay gap between EMS and other first responders. Yet, they note it fell well short of their goal of pay parity and has not remedied the workforce erosion that drives mandatory overtime and canceled ambulance tours.

Also unaddressed was the disparity in paid sick leave policy with police, fire, correction, and sanitation all being entitled to unlimited sick time — but their EMS colleagues limited to just 12 paid sick days.

The issue of unlimited paid sick-time has taken on a greater sense of urgency now that Covid, which has killed nearly 400 New York City civil servants including several FDNY EMTs, has become part of the further notice, day to day risks all first responders are required to endure without hazard pay.

Both DC 37's Local 2507, representing EMS, paramedics and fire inspectors, as well as DC 37's Local 3621, representing FDNY EMS officers, have filed lawsuits alleging the pay and benefit disparity between them and the other uniform services is due to the fact their members are mostly people of color and female.

In a response to a query listing the EMS union concerns, a spokesperson for FDNY Commissioner Laura Kavanagh wrote "the Commissioner has been a strong advocate for EMS her entire time with the department, including working tirelessly on the contact that established a significant raise for all EMS members and working closely with union leadership on recruitment and retention of EMS members."

Earlier this year, Kavanagh went into more detail during a sit-down interview with this reporter for City & State.

"Economic justice to me is a key issue and to see it in the agency in the future is very important to me," Kavanagh said. "I went to every EMS station at the height of the pandemic in March and April and saw first-hand the impact it was having on EMS – the truly brutal long days, with heart attack after heart attack and seeing so many people pass away. That image stuck with me, and I couldn't let it go. We have to do something about this. We certainly are not there yet. Parity is my goal. My most recent work with the last contract doesn't get us there but I hope it shows a down payment on my commitment because it is the largest increase that they have ever seen in their contract. We want people to make EMS a career."

The Daily News reported on Dec. 31 that the FDNY was promoting Deputy Assistant Chief of EMS Operations Michael Fields effective Jan. 1. Fields, who joined EMS back in 1994, two years before it was merged with the FDNY, will become the first African-American to hold that post previously held by retiring EMS Chief Lillian Bonsignore.

The EMS unions helped to fund the portion of their pay hikes beyond the pattern previously agreed to by DC 37 for the rest of its 125,000-plus members by increasing their work schedules. The city also agreed to a 6-percent pay differential as part of its expansion of the mental-health-response pilot program that pairs EMS workers with mental-health professionals in responding to non-violent mental-health calls that have traditionally been handled by the NYPD.

As part of the contract settlement, the EMS unions also opened the door to the FDNY shifting away from a 12-hour shift schedule to a mix that would include 8:45-hour shifts, increasing the flexibility for management to mandate overtime when relief was unavailable. That new schedule mix starts on Jan. 1.

While federal, state, and municipal elected officials have been promoting a so-called return to a 'post-COVID' normal, public health experts across the country have been warning about a brewing so-called tridemic — COVID, the flu and pediatric respiratory virus all surging simultaneously.

"More than three-quarters of pediatric hospital beds nationwide are at capacity," reported PBS. "And some states are reporting that more than 90 percent of pediatric beds are occupied. Seniors are also being hospitalized at a higher rate to respiratory illness. And hospitalizations from the flu are at a decade-level high."

"I am in the Bronx today and there must have been six or seven fever, cough, cardiac arrests that have come over the radio — the hospitals are just jammed," said FDNY EMS Lt. Anthony Almajore, the vice-president of DC 37's Local 3621. "I was at Bronx Lebanon Hospital and there were 23 ambulances sitting there with patients waiting to be triaged."

A message to the public information desk at the Bronx Lebanon Hospital was not returned on Dec. 30. A spokesperson for Health + Hospitals Corporation, the city's municipally-owned network of 11 hospitals, said the system was busy, but that it was managing. He referenced a press conference held by city health officials and Mayor Adams back on Dec. 20 at which the tridemic was referenced along with a public health suggestion that New Yorkers mask up and make sure they were up to date with their COVID and flu shots.

"With the holiday season in full swing and cases of COVID-19, flu, and RSV rising, we are asking New Yorkers to protect themselves and their loved ones once again. Mask up, get tested, get treated if you're eligible, and, if you haven't gotten your flu shot or your COVID-19 booster, we encourage you to roll up your sleeve," Adams told reporters five days before Christmas.

The EMS unions say there's a disconnect between the tone being set by the Adams administration of business getting back to normal and the actual conditions their members are encountering out on the streets where there's evidence of a deepening healthcare system crisis where many thousands of people continue to turn to the EMS and the emergency for basic healthcare amidst a tridemic.

DC 37 Local 3621 President Vincent Variale notes the department's shortage of paramedics and supervising Lieutenants compounds the problem of poor retention in the ranks of the 3,000 EMTs who often see their job as a just steppingstone to the much better paying firefighter title.

The Local 3621 president estimates he's down around 100 members out of his 500 plus member roster.

"During COVID there have been dozens and dozens of my members who have chosen to retire, and another dozen who just opted to resign and we have had only one class [40 EMS officers] graduate in the last two years — we are grossly understaffed in the Lieutenant rank," Variale said. "New York City is the best EMS teaching school in the country — they get their experience here and they can be welcomed in places like Colorado, Arizona, Florida, and South Carolina. They get hired right away by other agencies because we are New York City EMS and treated like heroes everywhere but here in New York City."

In addition to shortage of Lieutenants, FDNY EMS is short of paramedics. A robust private sector job market that promises better pay and more predictable hours is increasingly appealing to EMS veterans.  "If you are a paramedic and a veteran FDNY EMS officer, you can easily work in the urgent care setting anywhere," Variale said. "We just haven't taken the proper care to keep and promotes a structure in place to make this a pleasant or quality work environment so people will stay. New York City is falling apart."

"The EMS staffing is just not there — we are hanging by a thread. I don't want to sound overly dramatic, but on Jan. 1 the FDNY will be deleting units as they convert" to this mixed 12- and 8-hour shifts system which makes it easier to mandate EMS members work eight hours overtime, according to Almajore.

Mike Greco is the vice president of DC 37's Local 2507, which represents EMS, paramedics, and fire inspectors. Greco says the recent run up of call volume is more reminiscent of summertime call volume. "It's absolutely insane," Greco says of the current pace which also includes almost a 12=percent medical leave rate for EMS during the tridemic.

Local 2507 agreed to the FDNY's shifting to a schedule that relies on 8:45 hour and 12-hour shifts, but Greco says the union is completely dissatisfied with the implementation of it and has filed a grievance.

Greco estimates that while the FDNY is at its full 3,000 head count of EMTs, its down 100 of the 1,000 paramedics its budgeted for and is also short field supervision as well as EMS 911 operators. "But the reality is, even if we are staffed at what OMB says we are budgeted for, we remain seriously understaffed — we just need more of everything — if you want to properly run the 911 system and properly serve New York City," Greco said.

EMS union officials also are concerned about the status of the private sector EMS outfits that answer about a third of New York City's EMS 911 calls. "There are always rumors that hospitals are going to pull out of the system like we saw with Transcare [a private EMS provider that went bankrupt in 2016]," Greco said. "Reliance on these private companies isn't good. We don't have a municipal and non-municipal fire apparatus that responds to our fires. We should have a standard of care that's experienced — and that means training and equipment — and the only way to control that is to have it all be under the umbrella of the FDNY."

"Our EMS workers have done the equivalent of war-time service over the past three years," wrote Manhattan Borough President Mark Levine. "And the intensity is not letting up, as covid and other conditions have ensured that demand for emergency medical care remains intense. It's unacceptable that our EMS heroes are still so underpaid. It's long past time they are granted the pay parity they deserve."