House GOP's top priority if they ever get a speaker? Protect wealthy tax dodgers 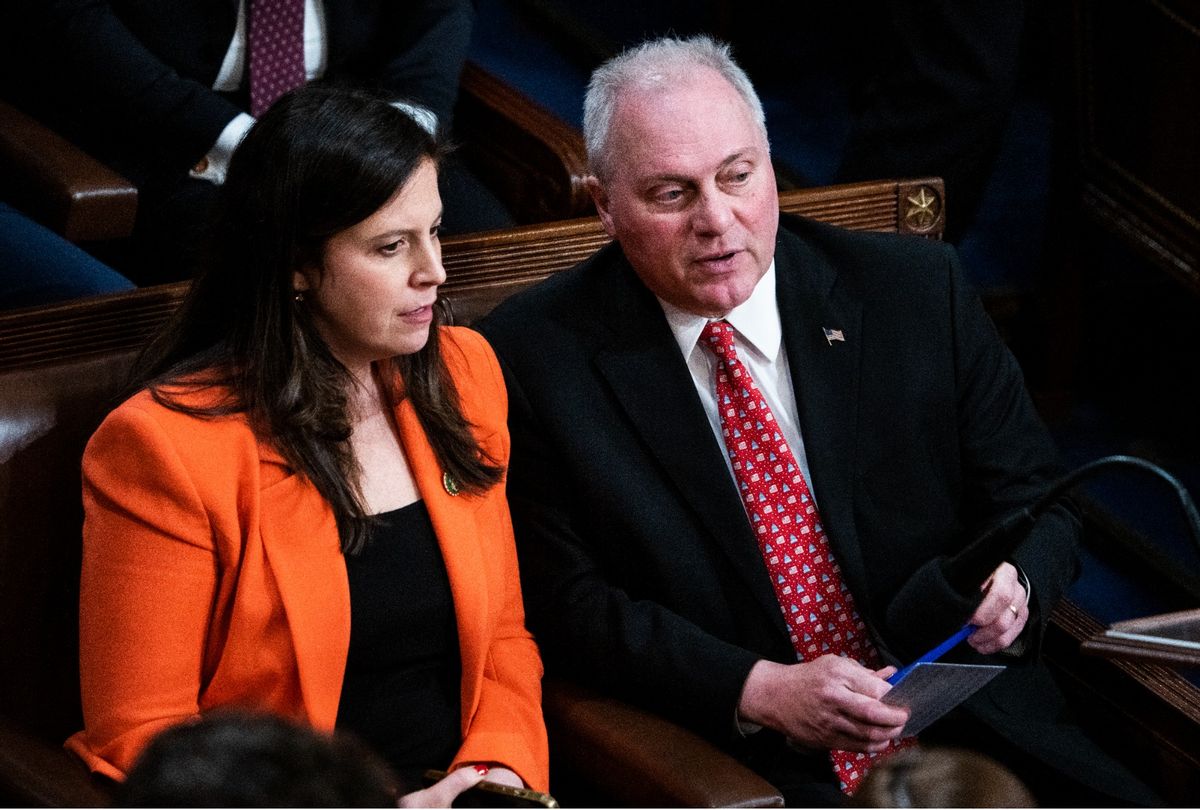 Rep. Steve Scalise, R-La., and House Republican Conference Chair Elise Stefanik, R-N.Y., are seen on the House floor during a vote in which House Republican Leader Kevin McCarthy, R-Calif., did not receive enough votes to become Speaker of the House on Wednesday, January 4, 2023. (Tom Williams/CQ-Roll Call, Inc via Getty Images)
--

Republicans began their control of the 118th Congress Tuesday with a narrow majority that failed six times to elect a speaker but had in hand "hit-the-ground-running" plans to pass legislation that critics say will "protect wealthy and corporate tax cheats" by rescinding tens of billions of dollars in new Internal Revenue Service funding in the Inflation Reduction Act.

On Monday, Steve Scalise, R-La., a party leader, said that the lower chamber's first order of business after electing a speaker will be taking up the Family and Small Business Taxpayer Protection Act.

"This Republican bill is ill-named because what it actually does is protect tax cheaters by repealing most of the new IRS funding set forth in last year's Inflation Reduction Act," Mother Jones senior editor Michael Mechanic wrote.

In a December 30 letter to House Republicans, Scalise said the legislation—along with 10 other bills and resolutions he proposed—would let GOP lawmakers "hit the ground running in our first weeks in the majority."

Scalise said in the letter that the Family and Small Business Taxpayer Act "rescinds tens of billions of dollars allocated to the IRS for 87,000 new IRS agents in the Inflation Reduction Act."

Although the "87,000 new IRS agents" claim has been widely debunked, it has nevertheless become a GOP talking point.

Writing for The American Independent, Josh Israel noted: "It has appeared in ads run by the campaigns of Sen. Ron Johnson, R-Wis., and North Carolina Republican Senate nominee Rep. Ted Budd; it has been used in Senate Leadership Fund attack ads in Georgia, Nevada, New Hampshire, North Carolina, and Ohio; and the right-wing Club for Growth Action and Congressional Leadership Fund have run spots lying about the number of new IRS agents. The Senate Republican conference's official Twitter account and those of dozens of other House and Senate Republicans have also tweeted the bogus 87,000 number."

As Mechanic pointed out, "From 2010 to 2018, even as the IRS received 9% more tax returns, its annual budget was slashed by $2.9 billion—a 20% reduction that cost the agency more than one-fifth of its workforce."

"Virtually no partnerships were audited in 2018," he continued. "By then, with [former President] Donald Trump in the Oval Office, the kneecapped IRS was scrutinizing the individual returns of just 0.03% of those $10 million—plus taxpayers, down from a peak of 23% in 2010. Audits of the $5 million—to—$10 million filers fell from just under 15% to a scant 0.04%."

A fair subset of superwealthy Americans doesn't even bother filing. The Treasury Department's Inspector General for Tax Administration reported in 2020 that nearly 880,000 "high income" non-filers from 2014 through 2016 still owed $46 billion, and the IRS was in no condition, resource-wise, to collect. The 300 biggest delinquents owed about $33 million per head, on average. Fifteen percent of their cases had been closed without examination by IRS staffers, and another one-third weren't even in line to be "worked."

"The recently enacted IRS funding—$80 billion over 10 years—was meant to remedy this shameful state of affairs," he wrote.

Despite the disunity evident in the speaker struggle, House Republicans appear united when it comes to slashing Social Security, gutting ethics safeguards, and pursuing policies like the IRS defunding measure that exacerbate inequality in one of the most unequal societies in the developed world.