“His name being in the mix is not progress—it’s pathetic," the progressive lawmaker said 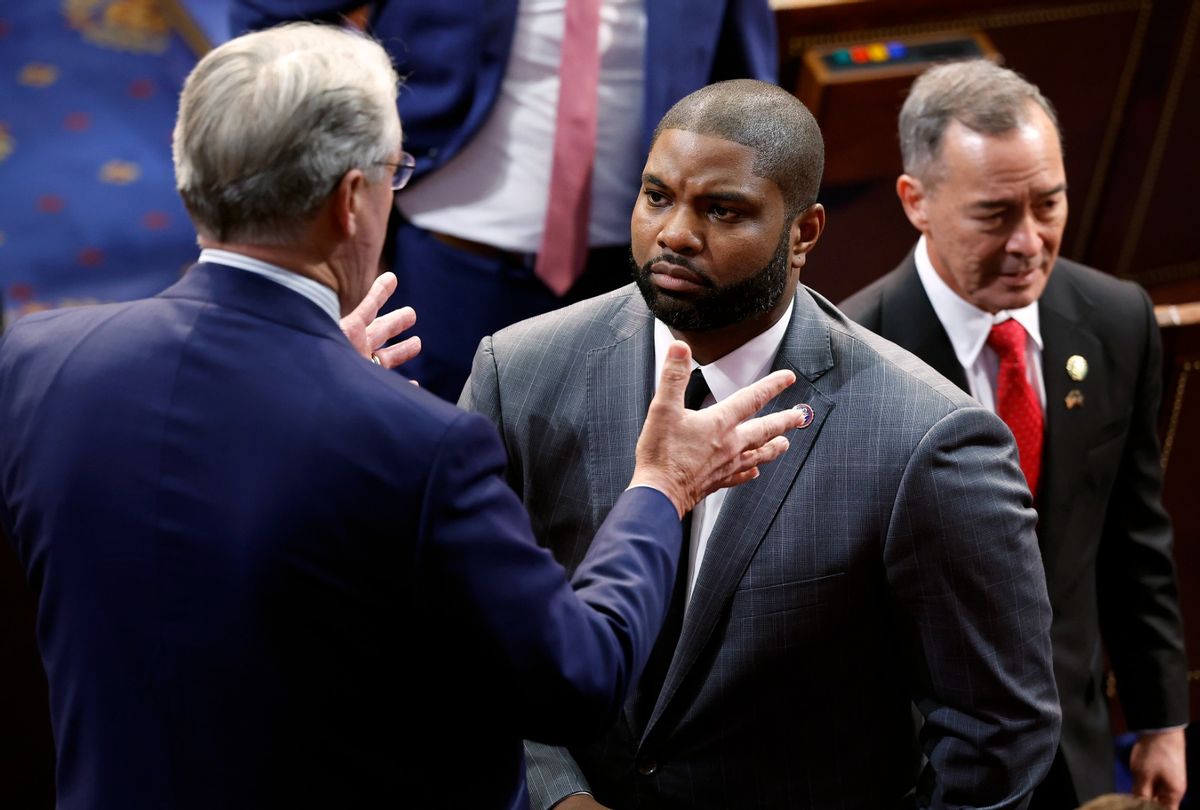 Rep. Byron Donalds (R-FL) talks with fellow Republicans after the new Congress failed to elect a new Speaker of the House at the U.S. Capitol Building on January 03, 2023 in Washington, DC. (Chip Somodevilla/Getty Images)
--

Two members of the Congressional Black and Progressive Caucuses are speaking out after a Black Republican member of Congress is tokenized by a member of his own party during a nomination speech for the House Speaker's race on Wednesday.

Just before the sixth round of voting got under way for House Speaker, Rep. Scott Perry, R-Pa., became the third GOP member of Congress to nominate Rep. Byron Donalds, R-Fla. Perry, who spoke for a band of defectors who've vocally been against electing Rep. Kevin McCarthy, R-Calif., to the top spot in the House, told members they would "fix" a broken Washington and that history could also be made by "electing the first Black Republican Speaker of the House."

The remarks met a swift rebuke from Rep. Cori Bush, D-Mo., who tweeted almost immediately, "FWIW, @ByronDonalds is not a historic candidate for Speaker. He is a prop. Despite being Black, he supports a policy agenda intent on upholding and perpetuating white supremacy." Her tweet continued, "His name being in the mix is not progress—it's pathetic."

Perry would go on in his remarks to remind members that the first Black members of Congress were Republicans. Perry said during his nomination of Donalds, "As a matter of fact, you probably also know that Frederick Douglass, who went and worked with Abraham Lincoln to emancipate the people of color in this country, said he'd never be anything other than a Republican." The reference is a popular, albeit misleading, talking point among the GOP given that the ideologies of both the Democratic and Republican parties essentially traded places long after Douglass proclaimed his loyalty to the party.

Donalds is one of a handful of Black Republicans to serve in the House of Representatives, the most since 1877. He was first nominated for Speaker during the fourth speaker vote by Rep. Chip Roy, R-Texas, on Wednesday.

Bush told TYT after the sixth round of Speaker votes that her problem isn't with Donalds, but the way the Republican party is using him as a way to counter the Democrats' nomination of Rep. Hakeem Jeffries, D-N.Y., who has been elected by his party to serve as minority leader.

Rep. Sheila Jackson-Lee told TYT that Democrats' nomination of Jeffries was due to his "storied history in leadership in the United States Congress." She would not comment on Perry's intent, but said, "when you over-emphasize race, you already have a problem."

Donalds came into office in 2021, the same year as Bush, as part of the "Freedom Force" - the Republican answer to the "Squad" that has "vowed to combat the supposed 'evil' of socialism", as reported by The New Republic.

Despite being a Trump-backed candidate who voted against the certification of Arizona and Pennsylvania's presidential elections in 2020, Donalds failed to win the chair seat for the GOP Conference against Rep. Elise Stefanik, R-N.Y.

Jackson-Lee said that she would not comment on Donalds and that she is "sensitive" to issues that downplay the seriousness of race. She said that she would rather her Republican colleagues join her in supporting legislation around reparations proposals for "the historic record of slavery and the continued disparities in the African American community."

For his part, Donalds shot back at Bush's comments in a tweet of his own, saying, "FWIW, nobody asked @CoriBush her opinion on the matter. Before you judge my agenda, let's have a debate over the policies and the outcomes. Until then, don't be a crab in a barrel!"