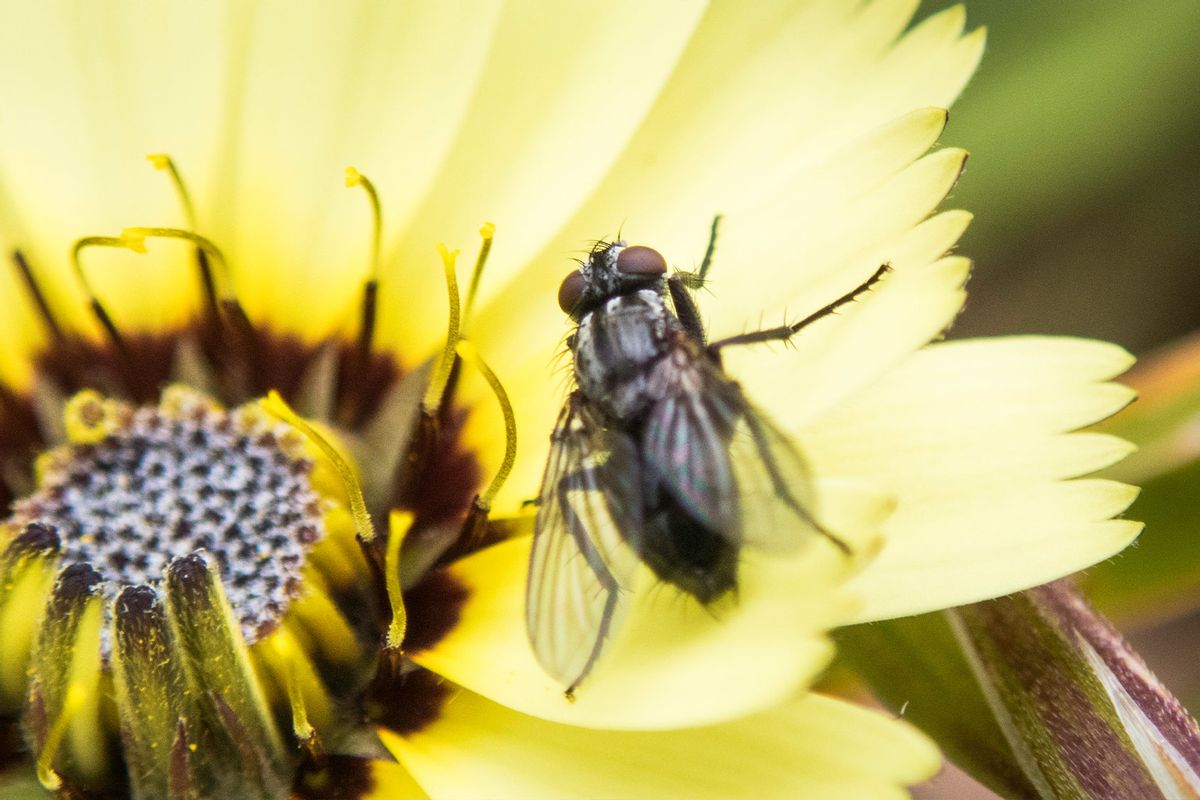 When you think of flowers being pollinated, you likely picture a bee or butterfly doing the work. But many different insects also visit flowers and help plants reproduce, including flies, wasps, beetles, and even certain mosquitoes. Some birds and bats also benefit flowering vegetation, acting as the liaison for sexual reproduction, a strange but widespread evolutionary practice.

But sadly, climate change is rapidly shifting the relationships between plants and certain bugs. And in Scandinavia, that has meant that flies are taking the place of moths and other more charismatic insects. The takeover of the flies speaks to the biodiverse history of the region that is being lost as the climate warms.

Researchers were able to figure this out using an interesting comparative analysis of pollinators that involved looking back at old research. Writing in the journal Nature Ecology & Evolution, researchers recreated an experiment from over century ago involving an inventory of the types of insects visiting plants.

There are far fewer moths and hoverflies than there were 125 years ago; now, flowers are being swarmed with muscoid flies, which are a superfamily including houseflies.

Between 1895 and 1900, a Finnish forester named Frans Silén recorded the various visitors to flowers in Kittilä, a village in Lapland, Finland 75 miles (120 km) north of the Arctic Circle. The study cites a travel book authored by Cutcliffe Hyne, who journeyed through the area in the summer of 1896, describing Kittilä as a "cluster of farms, with fields of barley and rye between the houses and herds of cows grazing beside the roadway." Silén aimed to complete a census as thoroughly as possible for flower-loving bugs in the area, jotting down the records of 17 plant species near rivers and churchyards.

Not much has changed in Kittilä in the last century in terms of land use — it's still a very rural area — but even this frigid region isn't immune to the perils of global heating. The plants that Silén studied still populate the area, but the bugs visiting the flowers seem to have changed dramatically. Only 7 percent of the observed visits to flowers involved the same bugs as back in Silén's time.

"That is surprisingly little," one of the study authors, Leana Zoller, an ecologist at Martin-Luther University Halle-Wittenberg in Germany, said in a statement. "We have noticed drastic changes in the networks of pollinators."

Insect swarms create so much electricity that they may influence the weather, study finds

Specifically, there are far fewer moths and hoverflies than 125 years ago; now, flowers are being swarmed with muscoid flies, which are a superfamily including houseflies. And these replacement pollinators may not be as effective as the other bugs that are seemingly being pushed out.

Many people confuse hoverflies with bees — and that's what the hoverflies want us to do. Volucella bombylans, for example, is a harmless, plump-looking hoverfly that mimics bumblebees. Silén often witnessed V. bombylans drifting among woodland geranium (Geranium sylvaticum) and Arctic raspberry (Rubus arcticus). Today, according to this study, you'd be far more likely to see these idyllic plants droning with black, boring houseflies like the kind typically buzzing around kitchen sinks.

The authors do report some good news: Bumblebee visits have remained relatively stable over time, which is "cause for optimism." That's because bumblebees — being archetypally fuzzy as heck — are extremely good at spreading pollen around and thus, helping flowers trade genetic information. The same optimism cannot be applied to most bumblebee populations, which are seeing cataclysmic declines across the globe, thanks to climate change.

"Insects are under fire from the poles to the tropics, and there's not much cover to duck behind," British journalist Oliver Milmann wrote in his 2022 book "The Insect Crisis." "The Arctic bumblebee, or Bombus polaris, is found in the northern extremities of Alaska, Canada, Scandinavia, and Russia. It is able to survive near-freezing temperatures due to dense hair that traps heat and its ability to use conical flowers, like the Arctic poppy, to magnify the sun's rays to warm itself up. Rocketing temperatures in the Arctic, however, mean the bee is likely to become extinct by 2050. Species of alpine butterflies, dependent on just one or two high-altitude plants, are also facing severe declines as their environment transforms around them."

But houseflies might actually benefit from a warmer climate, which also means more spread of human diseases like food-borne diarrhea. Less fuzzy flies, especially houseflies, are just not as good at pollinating as bees or moths. Therefore, it's not just the quantity of pollinators, but the quality that also matters. And the steep decline in moths and other specialized pollinators is worrisome. Certain plants, like bladder campion (Silene vulgaris), have evolved to service bugs that will more likely help them in return, tucking their nectar further back in the base of tubular flowers.

Moths, which have long sucking mouthparts called a proboscis, can reach this nectar easily. Less fuzzy bugs that are less like to spread pollen are deterred. Some of these flies are also "generalists," meaning they will flit to many different flowers, which makes pollination less likely. You need two or more of the same flower species to make a seed. Some moths, by contrast, are specialists that only rely on a single species, which can make them better at their "job." But in this study, even more common flower types were getting different tourists.

"Several plant species with more generalized floral forms, such as disk flowers, shifted from receiving visits from more hoverflies in the past to more muscoid flies in the present," Zoller and her colleagues wrote. "Mean pollen loads carried by hoverflies and muscoid flies are comparable, but probably there are large differences between individual species."

Plants may be able to compensate for such a dramatic shift in pollinators now, but the longterm effects are uncertain.

It's not yet clear how big an impact more flies will have on plant reproduction, but it have cascading effects. Less pollination means less plants, which means less food for pollinators. If more pollinators starve, there's less pollination, potentially causing certain species to spiral out into extinction. So far, that doesn't seem to be the case in Kittilä, but it's happening at a rapid pace elsewhere in the world.

"So far, the pollinator network in our study area still seems to be working well," Zoller said. "There is no evidence so far that the plants are getting too little pollen and are thus less capable of reproducing".

But elsewhere in the world, some insects are experiencing catastrophic declines, which gives a window for less charismatic bugs, like houseflies, to proliferate. Much of these changes are driven by increased temperatures and destruction of natural habitat.

And things could take a turn for the worse in Kittilä in the near future. Plants may be able to compensate for such a dramatic shift in pollinators now, but the longterm effects are uncertain. This is an indicator this research needs more attention. Part of the reason so many unknowns exist about pollinators — and why this study was unique in that it relied on century-old data — is because entomology (the study of insects) is historically underfunded. Plant and pollinator relationships are complex, but we know relatively little about them, especially over long time periods.

"Stabilizing the composition of species and their interactions across space and time is crucial to safeguard the ecosystem service of pollination," Zoller and her colleagues wrote.

Despite their small size, insects have an outsized impact on our planet. Swarms of bugs can create so much electricity that they may even influence the weather and pollinators are the underbelly of the majority of agriculture. But as the climate warms, those effects could have massive impacts that are hard to predict. When it comes to pollination, honeybees tend to get all the attention. But many plants and bugs rely on this system, which needs better scientific understanding if we want to slow the effects of a changed climate.