"I had easily gotten sucked into some things I had seen on the internet," Greene said in a Fox interview on Sunday 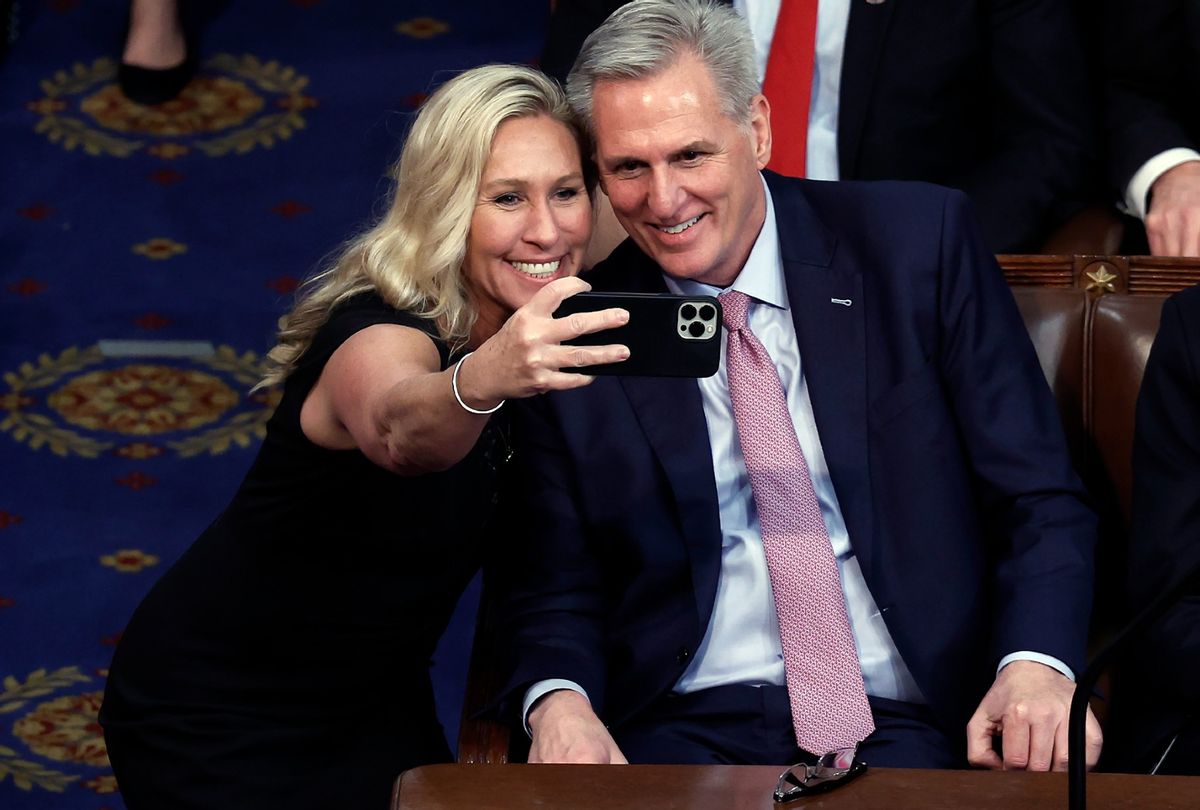 Marjorie Taylor Greene (R-GA) takes a photo with U.S. House Republican Leader Kevin McCarthy (R-CA) after being elected Speaker of the House in the House Chamber at the U.S. Capitol Building on January 07, 2023 in Washington, DC. ( Anna Moneymaker/Getty Images)
--

During an interview for Fox's MediaBuzz on Sunday, Marjorie Taylor Greene rehashed getting Trump on the phone during Friday night's House floor squabble to bring Kevin McCarthy's voting sessions to a close, and then segued to a casual dismissal of her ties to QAnon.

Speaking to host Howard Kurtz, Greene said she was surprised that "this went on as long as it did," in regards to the many rounds of votes it took in order for McCarthy to scrape together the amount needed for his Speaker of the House victory in the early hours of Saturday morning.

"There towards the end I had been talking with President Trump several times that night," Greene said. "I was trying to get Matt Rosendale on the phone with him. President Trump wanted to talk to him, and I was shocked that he refused his phone call."

Taking a sharp turn in the interview, Kurtz then asked Greene to comment on her previous associations with the standard beliefs of the QAnon movement, which she casually brushed off.

"Well, like a lot of people today, I had easily gotten sucked in to some things I'd seen on the internet," Greene said. "But that was dealt with quickly early on. I never campaigned on those things. That was not something I believed in. That was not what I ran for Congress on. So those are so far in the past."

In terms of the "early on" part of Greene's comment, A 2021 Vanity Fair article references a speech given by Greene in which she attempts to explain how and why QAnon information on the internet "sucked her in."

"Just watching CNN or Fox News, I may not find the truth," Green said in that speech. "So what I did is I started looking up things on the internet, asking questions like most people do every day. I stumbled across something, and this was at the end of 2017, called QAnon . . . I got very interested in it."

"I remember Marjorie Taylor Greene bringing QAnon up several times . . . in the presence of the president, privately with Mark [Meadows]," Former White House aide Cassidy Hutchinson said in a 2022 article from The Hill in relation to the events of the January 6 insurrection.

"Ms. Greene came up and began talking to us about QAnon and QAnon going to the rally, and she had a lot of constituents that are QAnon, and they'll all be there," Hutchinson said. "And she was showing him pictures of them traveling up to Washington, D.C., for the rally on the 6th."

Watch a clip from Greene's interview with Fox on Sunday below.

CORRECTION: An earlier version of this story contained the wrong first name for MediaBuzz host Howard Kurtz. The story has been corrected.