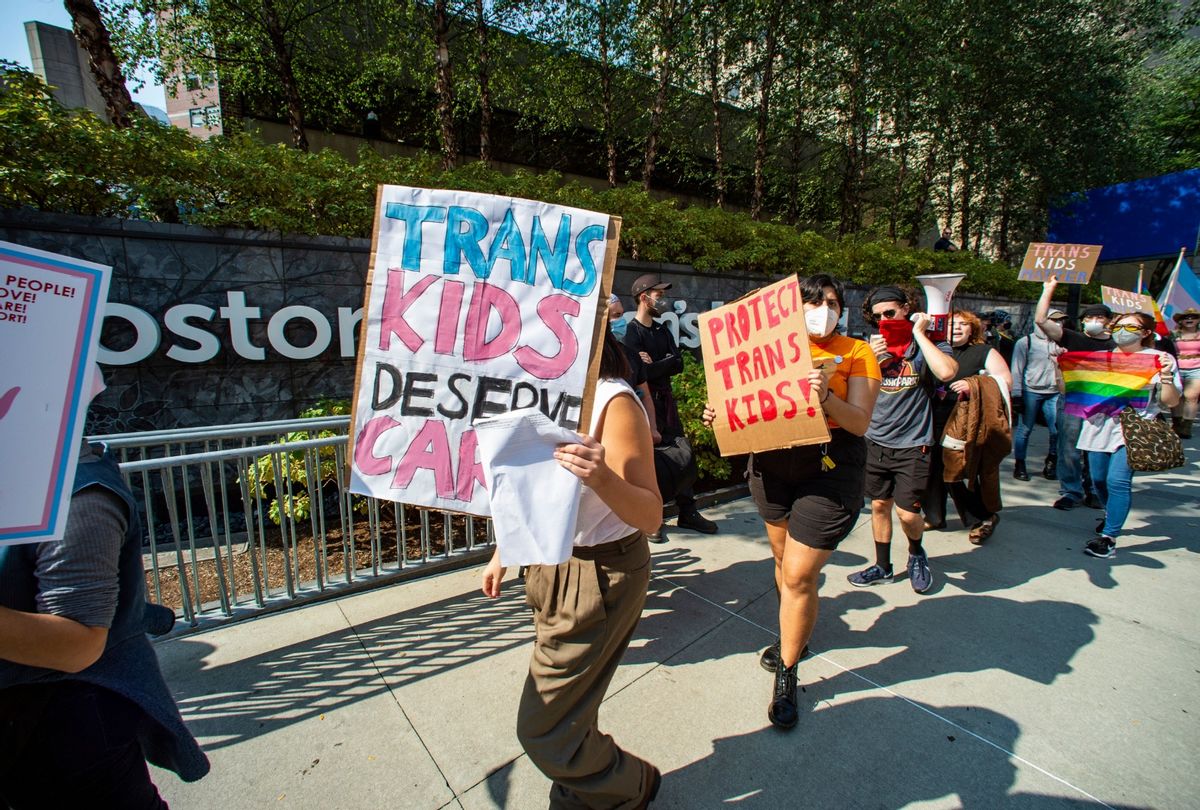 Demonstrators carry signs in support of trans-children and gender affirmation treatments during a rally outside of Boston Childrens Hospital in Boston, Massachusetts, on September 18, 2022. (JOSEPH PREZIOSO/AFP via Getty Images)
--

Just one week into 2023, state legislatures across the United States are already planning to consider more than two dozen bills aiming to cut off transgender people's access to healthcare, with adults as well as minors targeted.

The legislation that was introduced or pre-filed in the first week of the year includes Senate Bill 129 in Oklahoma, which is set to be formally introduced in the state Senate in early February. The pre-filed legislation would ban all gender-affirming surgery for people under the age of 26, indicating, according to researcher Erin Reed, that the previously "hypothetical escalation" of transition bans for adults is now in motion.

"This is the worst anti-trans bill I have ever seen filed in any state," Reed told the Associated Press on Saturday.

Vivian Topping, director of advocacy and civic engagement at the Equality Federation, said the proposal signifies the "startling new evolution of what these bills can be."

"This is the worst anti-trans bill I have ever seen filed in any state."

"We haven't seen these types of bills in previous years," Topping told The 19th.

Republicans in South Carolina have proposed banning gender-affirming care for people who are 21 or younger.

In preparation for the new session, lawmakers in Texas pre-filed 10 anti-transgender bills in the last two months on 2022, including a proposal to make gender-affirming care for minors a second-degree felony for physicians and categorizing the prescription of hormonal therapy for minors with gender dysphoria as child abuse.

Both Oklahoma and Arizona lawmakers will consider legislation requiring school staff to refer to children by the name and sex found on their birth certificate unless parents provide written consent for the child to be addressed otherwise—effectively demanding that adults "misgender trans and nonbinary students by default until informed otherwise by a parent," The 19th reported.

Topping noted that dozens of anti-trans bills have failed to pass in state legislatures across the country as advocates have ramped up pressure on lawmakers to protect LGBTQ rights.