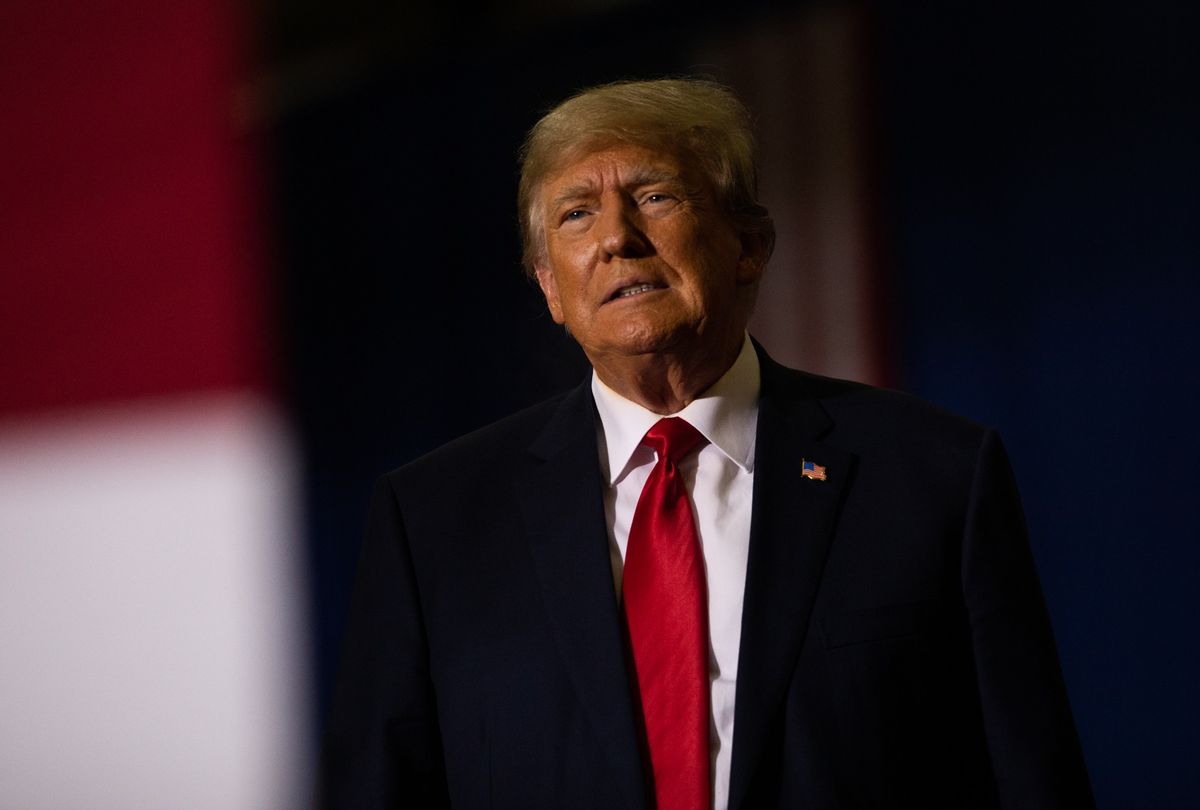 Former President Donald Trump gets ready to speak during a Save America rally on October 1, 2022 in Warren, Michigan. (Emily Elconin/Getty Images)
--

Former President Donald Trump gave a taped deposition in a defamation lawsuit filed by E. Jean Carroll, who alleged that the former president sexually assaulted her. Trump has attempted to get the case thrown out, but it was denied.

Speaking to MSNBC's Nicolle Wallace, legal analyst and host Katie Phang made it clear that the released transcripts show Trump continuously shooting himself in the foot and she pointed to his personal attacks on Carroll during his deposition as evidence.

Trump, who has denied Carroll's allegations, told the lawyers in the newly unsealed Oct. 2022 deposition that her claims are "a big, fat hoax."

"She's a liar and she's a sick person in my opinion," Trump said. "Really sick. Something wrong with her."

Carroll's attorney continued: "Okay. In addition to the ... Russia hoax, the Ukraine hoax, isn't it true you also referred to the use of mail ballots as a hoax?"

Trump proclaimed: "Yeah, I do. Sure... I do. I think they're very dishonest. Mail-in ballots. Very dishonest."

Carroll's lawyer asked if it was true Trump voted using a mail-in ballot. Trump's attorney objected, but Trump continued, "I do. I do."

The timing of this is important, said Phang, because it came amid Trump's attacks on E. Jean Carroll on his social media platform Truth Social after he had left office. So, while involved in a lawsuit for attacking Carroll, he attacked Carroll again.

At issue in the case is whether Trump could be charged for something like this because he claimed he was making the attack in the context of his role as the president of the United States. The new comments from Trump, attacking Carroll, came after he was no longer in office, lending themselves to another potential defamation case if courts decide Trump can be sued for behavior while president.

"So the reason why that's important is as you mentioned, Nicolle, there's a trial that's going to happen and this deposition was taken as a part of the discovery process for that trial that's going to happen in April," explained Phang. "So no matter what happens in that appellate court for that original defamation case that was brought by E. Jean, because Donald Trump was stupid enough to defame her again on Truth Social and because he was stupid enough to step in it repeatedly at his deposition, he's going to go to trial in April and he is more likely than not going to be found liable for the claims that are brought by E. Jean. and that is why this videotaped deposition is so important."

"He basically denies flat out that he's ever touched a woman in any part of her body — specifically it's denying touching a woman on her breasts or buttocks or any other sexual part without her consent," said Phang. "He says 'no' under oath. You and I both know, the whole world knows that on that 'Access Hollywood' tape he boasted about he would grab them by the blank and he could do it when you're a star."

Phang explained that it's more and more examples of Trump being caught repeating lies while under oath.

"We all think — and we all know his credibility is suspect, but when it comes to the particular facts of this case the more that you're painted as a liar the more that you are a liar and the jury's going to determine that," she continued. "And it's ridiculous that he wants to call E. Jean a liar when the facts militate toward the truth, which is what she said happened."

Watch the story below or at this link.