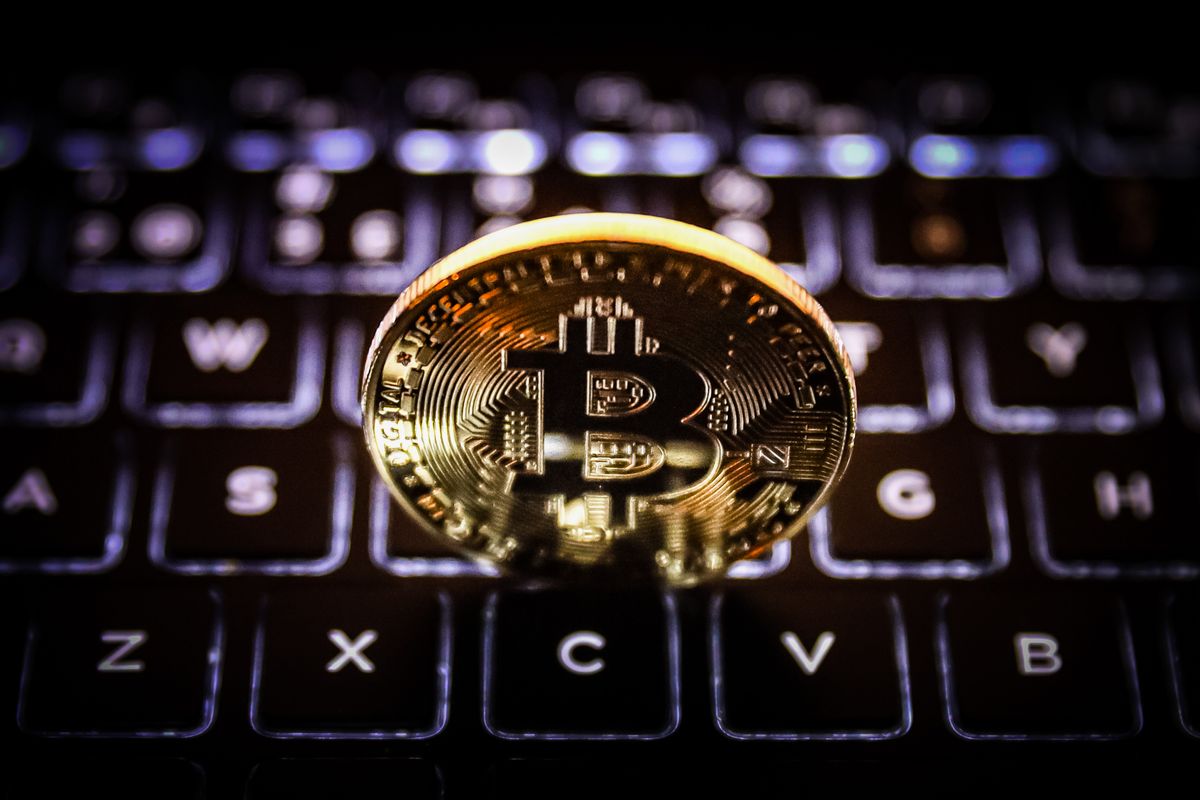 A visual representation of a Bitcoin cryptocurrency as a gold coin on a computer keyboard. (Getty Images)
--

The environmental group Earthjustice has filed suit against New York state regulators, arguing that their decision to let a Canadian cryptocurrency mine take over a natural gas power plant violates the state's climate protection law.

The lawsuit, filed Friday with the Supreme Court of Albany County, says allowing Digitech to take over the plant near Buffalo would cause greenhouse gas emissions and other pollution to skyrocket. But the suit centers on a separate, yet related issue: settling a key debate over whether the Public Service Commission, a state body that regulates utilities, must consider emissions in its decision making.

Canadian blockchain technology company Digihost filed a petition with the New York Public Service Commission in early 2021 to purchase the Fortistar plant in the town of North Tonawanda. The facility had been operating as a peaker plant, providing electricity on the handful of days each year when demand spiked. It has released between 3,000 and 43,000 metric tons of carbon dioxide annually since 2016, according to Environmental Protection Agency data analyzed by Earthjustice. But Fortistar estimates that the plant will release more than 300,000 metric tons each year once it begins powering Digihost's crypto mining facility. Emissions of harmful pollutants like particulate matter, volatile organic compounds, and nitrogen oxides will also increase.

"The Public Service Commission can no longer ignore the impacts of its decisions," said Roger Downs, conservation director for the Sierra Club Atlantic Chapter, which is a plaintiff in the suit. "Especially when they run counter to public benefit and endanger the air quality for communities already burdened with a disproportionate amount of pollution."

Under New York's Climate and Community Protection Act, which former governor Andrew Cuomo signed into law in 2019, the state must get 70 percent of its electricity from renewable sources by 2030 and 100 percent from emissions-free sources by 2050. The law also dictates that state permitting, licensing, and other administrative approvals or appeals, "shall not disproportionately burden disadvantaged communities." Just how those communities will be identified has yet to be finalized, but a mapping tool that uses criteria under consideration shows that several census tracts near the Fortistar plant could qualify. The area already grapples with a number of environmental burdens, including a high concentration of chemical facilities and industrially zoned land, flood risks, and pollution.

Crypto operations requires large numbers of computers that suck up an enormous amount of energy. The resulting emissions have made crypto mining a contentious issue in New York. Governor Kathy Hochul cracked down on cryptocurrency mining last year, temporarily banning environmental permits for fossil fuel plants that power crypto operations. But the two-year moratorium does not apply to those that already filed their paperwork — including the Fortistar plant, which filed to renew its air permits last year.

The decision to approve those permits falls to the Department of Environmental Conservation, which has a clear mandate to consider the state's climate law. The agency has already made several high profile decisions to deny permits for fossil fuel plants and even rejected an application to renew the air permit for a similar crypto mining facility, the Greenidge natural gas power plant, because its "continued operations would be inconsistent with the statewide greenhouse gas emission limits established in the Climate Act."

The Public Service Commission, on the other hand, has contested its role in helping the state meet its emissions goals. Its seven members are appointed by the governor to regulate gas and electric utilities with the goal of ensuring "access to safe, reliable utility service at just and reasonable rates." When utilities want to raise customer rates to invest in new infrastructure, they must get the commission's approval. But despite its power over the buildout of natural gas pipelines, power plants, and other long-lived fossil fuel assets, the panel has repeatedly rejected the idea that it must consider emissions in its decision making.

In approving Digihost's acquisition of the Fortistar plant, the commission said the emissions question was beyond the purview of the proceeding, which was limited to examining whether the transfer would harm ratepayers. (Commissioners determined it would not.) However, environmental groups point to a section of the law which states, "In considering and issuing permits, licenses, and other administrative approvals and decisions …all state agencies, offices, authorities, and divisions shall consider whether such decisions are inconsistent with or will interfere with the attainment of the statewide greenhouse gas emissions limits."

If the court agrees, the decision would have implications not only for Digihost but for utility regulation going forward: It could force the Public Service Commission to consider how allowing utilities to spend money on fossil fuel projects might hinder the state's emission reduction goals.