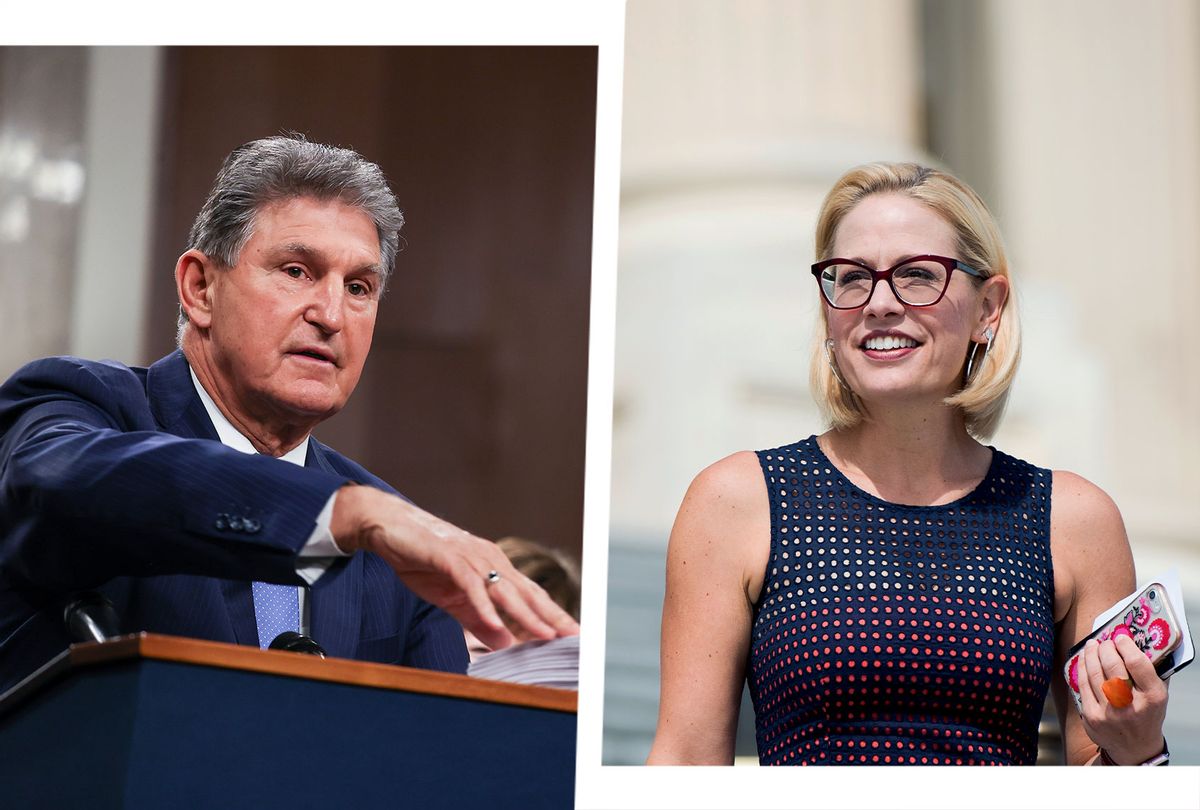 Independent U.S. Sen. Kyrsten Sinema of Arizona and right-wing Democratic Sen. Joe Manchin of West Virginia took heat Tuesday for high-fiving over their shared support of the filibuster while "rubbing elbows with Wall Street CEOs and celebrities in the lap of luxury" at the World Economic Forum's annual summit in Davos, Switzerland.

At one point during the panel discussion, Manchin asked Sinema, "We still don't agree on getting rid of the filibuster, correct?"

At the World Economic Forum in Davos, surrounded by the super rich, Kyrsten Sinema and Joe Manchin agree that they won't end the filibuster. Then they high-five.

Both have used their position to hurt working people, and the planet, and make their rich friends richer. pic.twitter.com/MOteq9RRYg

"Sinema has always been and will always be all about Sinema. She doesn't care who her policies hurt. She doesn't care that she stood in the way of voting rights and abortion rights, as long as she got the headlines she wanted," Sacha Haworth, spokesperson for the Replace Sinema campaign, said in a statement. "Now, she's on stage in Switzerland, in front of an audience of billionaires and Wall Street CEOs, bragging about her obstruction and giving high-fives. It's no wonder she's so unpopular among Arizonans of every political stripe."

The Replace Sinema campaign is a Change for Arizona 2024 PAC project focused on "defeating her in a potential three-way general election and replacing her with a real Democrat."

Defending her support for the archaic Senate rule historically used to uphold white supremacy and, more recently, to stymie key Biden administration agenda items, Sinema said that "we had free and fair elections all across the country, so one could posit that the push by one political party to eliminate an important guardrail and an institution in our country may have been premature or overreaching in order to get the short-term victories they wanted."

She has terrible taste in friends. https://t.co/jh9YKJENJg

Replace Sinema noted that the senator is "schmoozing with CEOs, securing more dark money, [and] ignoring her constituents" while "rubbing elbows with major players who ran well-funded campaigns to defeat any tax increases for billionaire corporations and Wall Street." These include members of the Business Roundtable, "including JPMorgan Chase's CEO, the head of Blackrock, the CEO of Hewlett Packard, and an executive at Bain & Company."

"Where's Kyrsten Sinema today? Is she doing her job in Arizona or in Washington?" Replace Sinema asked in a statement. "Nope. She's in Switzerland, of course. At the famous Davos World Economic Forum, where billionaires and Wall Street execs can sidle up to global leaders and hang out with celebrities in the elitist, most rarefied of settings. As far away from her constituents as possible, and in the lap of luxury. Just as Sinema likes it."

"And of course," the group added, "Sinema will get to spend time with her Wall Street allies who have lobbied for many of the same special tax breaks and loopholes for corporations and billionaires that Sinema has championed."