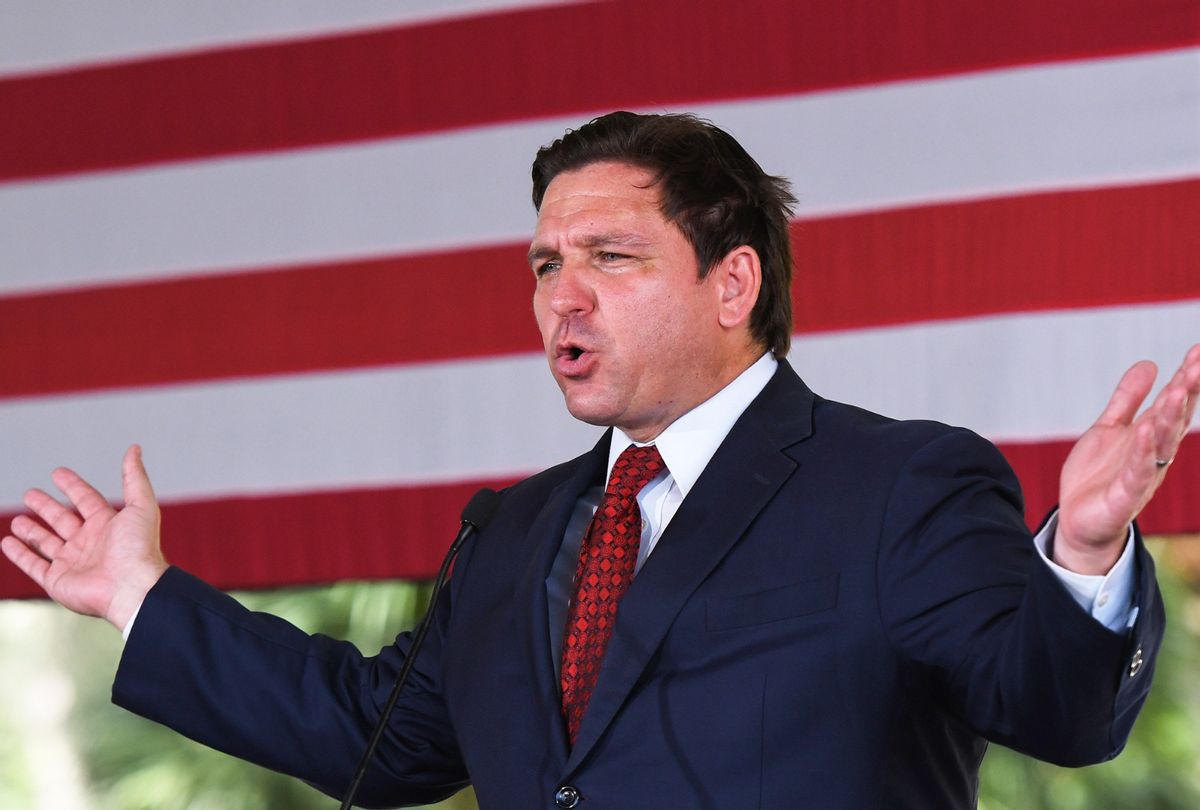 Florida Gov. Ron DeSantis speaks to supporters at a campaign stop at the Horsepower Ranch in Geneva. (Paul Hennessy/SOPA Images/LightRocket via Getty Images)
--

Appearing at a press conference with two of his allies who have consistently spread Covid-19 misinformation, Florida Gov. Ron DeSantis on Tuesday unveiled a proposal to permanently ban masking requirements, vaccine mandates, and other pandemic mitigation measures in his state.

The Republican governor, who is widely expected to run for president in 2024 and was found to be neck-and-neck with former President Donald Trump in a University of Massachusetts Amherst poll last week regarding potential GOP candidates, announced his plan to make permanent several laws passed in Florida in November 2021, including one that would penalize companies that require workers to wear masks or be vaccinated against Covid-19.

Under the proposal, vaccine and mask requirements for people using public transit or entering schools or government buildings would be forbidden, and employers would be banned "from hiring or firing based on mRNA jabs," said the governor.

A new ban pertaining to healthcare officials' efforts to curtail public health misinformation was also included in DeSantis's proposal, with the governor boasting that Florida could soon offer "landmark protections for free speech for medical practitioners."

Those protections would come in the form of a ban on medical boards reprimanding medical providers for spreading Covid-19 misinformation, including on social media.

"When the world lost its mind, Florida was a refuge of sanity, serving strongly as freedom's linchpin," DeSantis said as he unveiled the proposal. "These measures will ensure Florida remains this way."

Florida Surgeon General Joseph Ladapo joined DeSantis at his press conference Tuesday and repeated false claims about Covid-19 mitigation strategies, saying masks do not prevent the spread of the coronavirus and that vaccines are ineffective.

Ladapo's colleagues at University of Florida College of Medicine published a report on Monday finding that the surgeon general used "careless, irregular, or contentious research practices" to reach his conclusions about Covid-19 inoculation.

DeSantis was also joined by dermatologist Dr. Jon Ward, who the governor praised as "one of the engines behind this movement" and who in 2021 urged parents to "train your child" to lie to school officials about previous Covid-19 infections in order to avoid having to quarantine after an exposure.

The governor suggested his proposed bans will help establish Florida as a bastion of freedom from public health requirements that have been found in several studies to reduce the risk of spreading Covid-19 and developing a severe, deadly case of the disease—but Rep. Fentrice Driskell (D-67), the state House Democratic leader, countered that DeSantis is promoting "backwards thinking."

"Well, that was weird," Driskell said at a press conference responding to DeSantis's proposal. "The governor made the point that Florida is the only state in the nation giving this type of vaccine guidance. There is a reason for that."

Driskell accused DeSantis of being "the No. 1 peddler of misinformation from the anti-vax establishment" and promoting "a fake ideology with real consequences."

According to Statista, as of this month Florida has had the 13th highest rate of death from Covid-19 in the U.S., and the 8th highest case rate.