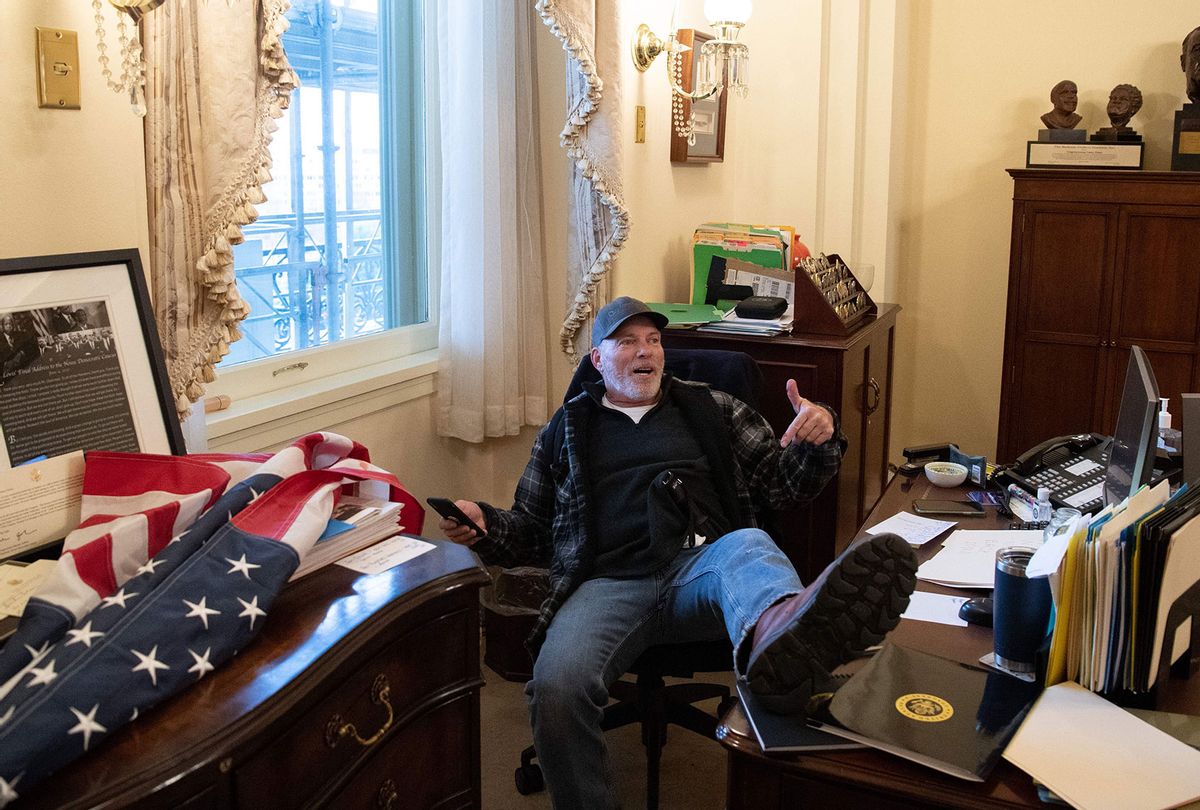 Richard "Bigo" Barnett, the January 6 rioter who was famously photographed putting his feet up on the desk of then-House Speaker Nancy Pelosi (D-CA), tried to copyright the note he left on her desk, according to WUSA9.

The revelation came out during his trial that started last week, where he faces eight counts, including obstruction of an official proceeding, and entering a restricted building with a dangerous weapon.

"Federal prosecutors played an audio recording Wednesday of a jailhouse call made by [Barnett], of Gravette, Arkansas, while he was in pretrial detention on charges stemming from the 2021 assault on the U.S. Capitol Building," reported Jordan Fischer. "Barnett, now 62, was arrested two days after the riot and remained in custody until U.S. District Judge Christopher Cooper released him to home confinement on April 27, 2021. During the call, made to his wife, Barnett suggested copyrighting a portion of the note he left for then-Speaker Pelosi: 'Hey Nancy, Bigo was here you biatch.'"

According to the report, prosecutors say Barnett also stole an envelope from Pelosi's office, but his lawyers claim because he left a quarter behind, he compensated for the envelope's fair market value.

"Prosecutors have shown jurors videos of Barnett showing off the 950,000-volt 'Hike n' Strike' walking staff he carried into the Capitol, including one surveillance video from inside a hotel bar on the evening of Jan. 5. During the defense's opening statement Wednesday, one of Barnett's attorneys, Joseph McBride, said they would prove the stun gun feature of the staff was not functional on Jan. 6," said the report. "In contrast to Assistant U.S. Attorney Alison Prout, who told jurors Barnett had come to D.C. 'prepared for violence' on Jan. 6, McBride characterized his client as a politically incorrect man from rural Arkansas who simply wanted to voice his displeasure with the results of the 2020 presidential election."

Attorneys for Barnett also claimed at one point that he was lost in the Capitol and just trying to find the bathroom.

Nearly 1,000 people have been charged, convicted, or given plea agreements in connection with the January 6 attack — the largest number of defendants in connection with a single event in U.S. history. These charges range from misdemeanor trespassing and disorderly conduct, to assaulting police officers, to seditious conspiracy charges for the higher-ups of far-right groups like the Proud Boys and Oath Keepers.