Jared and Ivanka were sure Trump would accept his defeat but just needed to "nurse his wounds," book says 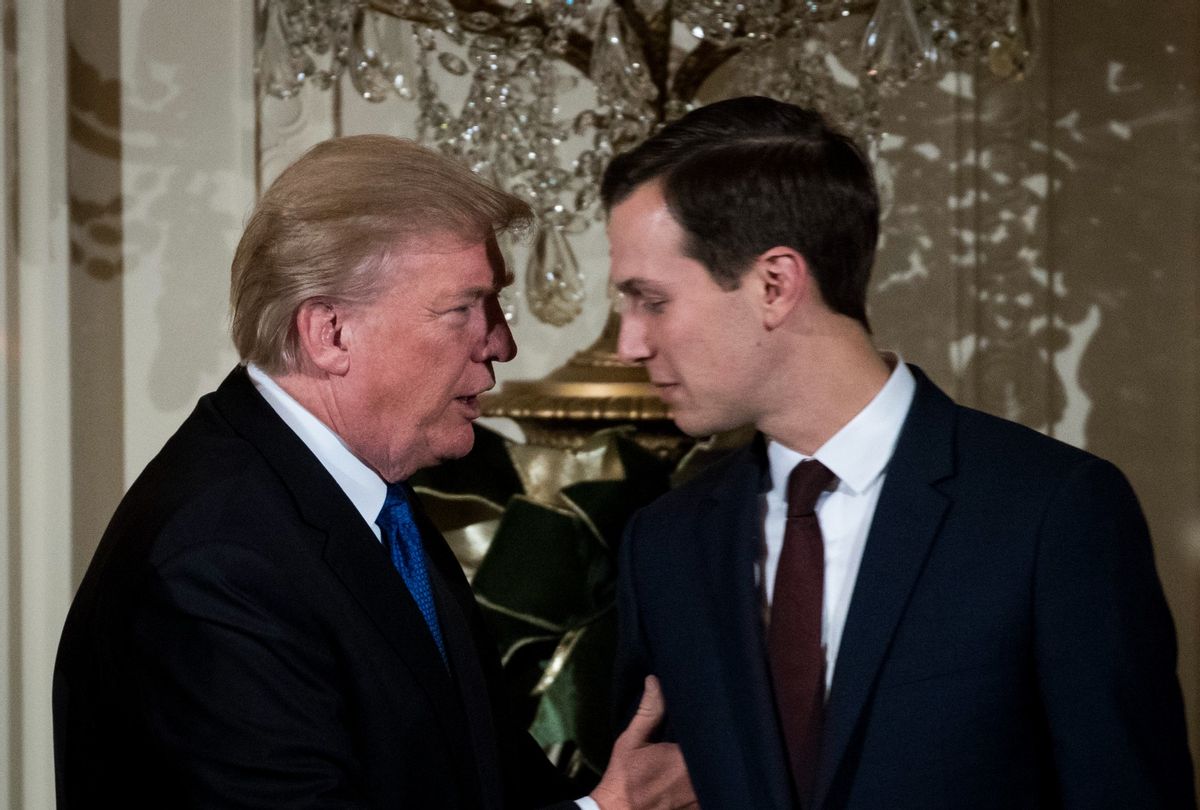 Donald Trump and Jared Kushner in the East Room of the White House, December 7, 2017 in Washington, DC. (Drew Angerer/Getty Images)
--

A new book is shedding light on the behind-the-scenes arguments that took place between former President Donald Trump and his son-in-law Jared Kushner during his time in the White House.

During the days leading up to the insurrection on the U.S. Capitol, Trump spent a substantial amount of time pushing baseless claims and conspiracy theories questioning the integrity of the presidential election he lost to President Joe Biden.

According to Mediaite, details about Trump and Kushner's clashing are included in the new book, "The Fight of His Life: Inside Joe Biden's White House," written by author Chris Whipple.

Although many of Trump's supporters and allies echoed his claims, Kushner, according to Whipple, was not in agreement with many of the former president's attempts to overturn the election. Whipple even highlighted some of the "knock-down, drag-out screaming matches" Kushner actually had with Trump.

"With all due respect, I'm not going to like what you are doing, and you're going to be screaming at me," Kushner reportedly told the former president during a heated exchange about the claims of voter fraud.

According to Whipple, there was also a time when Kushner warned Trump of what his future might look like based on the conspiracy-driven path he was on.

"Look, when you're out of here, a lot of people will scatter," Kushner reportedly said, adding, "I'm with you until you hit the dirt — so you may want to listen to what I'm saying."

Per the news outlet, The Forward's Jacob Kornbluh also highlighted key takeaways from the book with a brief overview of what happened prior to Biden's inauguration, which Trump did not attend.

"Since election day, Kushner and Ivanka Trump had kept telling themselves that Trump would eventually come around and accept his defeat, but 'just needed to nurse his wounds,' Whipple writes," Kornbluh reported. "Even after supporters of Trump stormed the U.S. Capitol on Jan. 6, 2021, Kushner reportedly told friends he still hoped Trump would invite Biden to the White House on inauguration day. 'That image of the two presidents together, he thought, was what America wanted to see,' Whipple writes."

The author's book has garnered lots of attention and received praise from The New York Times's John Gans, who described the piece as a "feat of a book."

"Writing a book that quickly — and especially on these past two years — is no easy task," Gans wrote, adding:

"The titular fight may be Biden's, but Whipple must himself exhaustively cover President Donald Trump's lame-duck struggle and accused sedition. At its best, Whipple's comprehensive approach adds dimension to the news stream — for example, Biden's discomfort with the Secret Service is both deeper and more dramatic than is widely understood. At its worst, the book's iterative structure feels like scrolling a dated Twitter timeline in which the vaccination drive is defeating Covid-19, and Biden's effort to curb climate change is doomed to failure."