Switching to an electric car saves money. Unless you’re poor

A new study says 90% of Americans would save by getting an EV. The other 10%, not so much 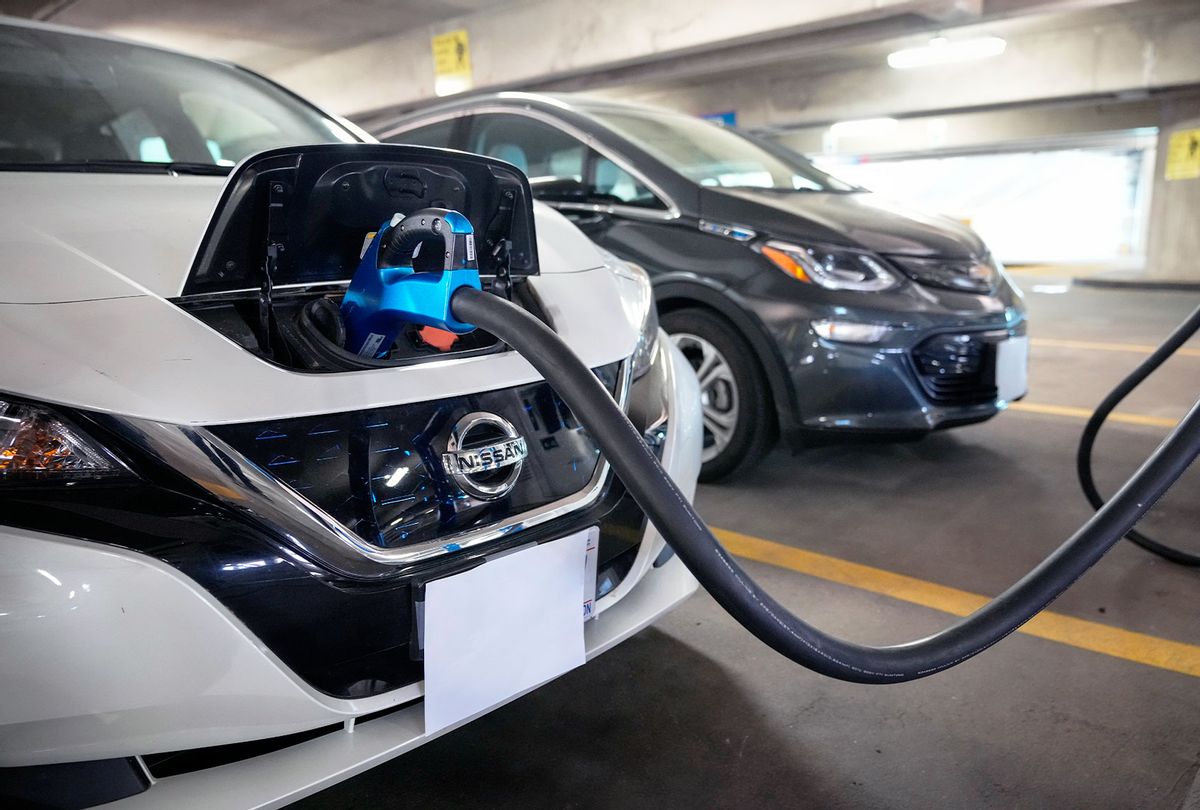 Electric vehicles are displayed before a news conference with White House Climate Adviser Gina McCarthy and U.S. Secretary of Transportation Pete Buttigieg about the American Jobs Plan and to highlight electric vehicles at Union Station near Capitol Hill on April 22, 2021 in Washington, DC. (Drew Angerer/Getty Images)
--

The appeal of electric cars is straightforward: Owners get to save money by skipping trips to the gas station and feel good about doing their part to cut carbon emissions. That's part of the reason why U.S. sales are currently soaring, with electric vehicles expected to make up 10 percent of the cars and light-duty trucks on roads in 2030. This is good news for the climate, since transportation is the single largest source of emissions in the country.

The decision to switch to an electric-powered vehicle benefits 9 out of 10 U.S. drivers, but the lowest income Americans get left behind, according to the results of a new study from the University of Michigan.

A group of researchers at the school's Center for Sustainable Systems analyzed data on income level, gas and electricity costs, and vehicle-specific greenhouse gas emissions for every census tract in the United States. They found that over 90 percent of vehicle-owning households would see reductions in both carbon emissions and the amount they spend on powering their car by switching to an electric vehicle. These benefits are especially pronounced on the West Coast, where some households could cut their annual transportation bills by $600 or more, and slash their annual carbon emissions by more than 4.1 metric tons, the study found.

The pattern does not hold true, however, for those with the lowest incomes, more than half of whom would continue to be burdened by high transportation costs — defined as more than 4 percent of their income — after trading in their gas-guzzler for an electric car. The study found that households that would receive little benefit are concentrated in Midwestern states with coal and natural gas-reliant energy grids, as well as in Alaska and Hawaii, the two states with the highest cost of electricity.

The study's authors called these disparities a problem of "distributive justice," a term used to describe the equal distribution of a policy's benefits and burdens. They say their research is the first to consider how switching to an electric vehicle would impact both emissions and energy costs across different regions of the country.

"Our results confirm the potential for widespread benefits from EV [electric vehicle] adoption," said study author Joshua Newell, an urban geographer at the University of Michigan, in a press release. "However, EV ownership in the U.S. has thus far been dominated by households with higher incomes and education levels, leaving the most vulnerable populations behind."

The potential for an electric vehicle to decrease its owner's overall carbon footprint and energy expenses depends on many factors, including the car battery's power source, driving and charging patterns, and local electricity rates. Rural and suburban households tend to spend more of their income on energy because of a lack of public transportation and the need to drive longer distances.

Take an electric car-owner living in a suburban area of Indiana, where more than half of electricity comes from coal-fired plants. Even though the owner is not releasing greenhouse gasses while driving to work, they are using more power to charge their vehicle, and it's dirty. Moreover, the average electric bill in Indiana is high relative to the rest of the country — $162 last October compared with the nationwide monthly average of $139 — so charging at home can get expensive. This driver might save some money they would have spent on gas by purchasing an electric car, but the difference might not be enough to convince them to make the switch.

Compare that to somebody buying an electric car in an urban part of California. Since more than 30 percent of the state's grid is powered by renewables, this owner will be charging their vehicle with cleaner electricity, resulting in a net-decrease in their carbon emissions after ditching their gas-powered car. Electricity bills are right around the national average, but foregoing the costs of filling up the tank in California — where gas runs $4.40 a gallon — more than makes up the difference.

Newell, the co-author of the study, told Grist that these findings raise all sorts of questions about the best way to get Americans to buy more electric cars. He cited a need to develop programs like California's Enhanced Fleet Modernization Program, which provides funds for low-income residents to scrap their high-polluting vehicle for a cleaner one.

The study didn't account for the cost of buying an electric vehicle, because prices are expected to swing in the coming years. Beyond the cost of the actual car, Newell noted that a lack of public charging stations in rural and low-income areas remains a problem. California, for instance, has one charging station for every 2,848 residents, according to Choose Energy, whereas Alabama has one for every 20,000. One way of addressing that, he said, is to expand and subsidize them. But it all depends on what's best for that town.

Given the many variables at play, Newell said efforts to get more Americans to buy electric vehicles need to be crafted at a "regional level."