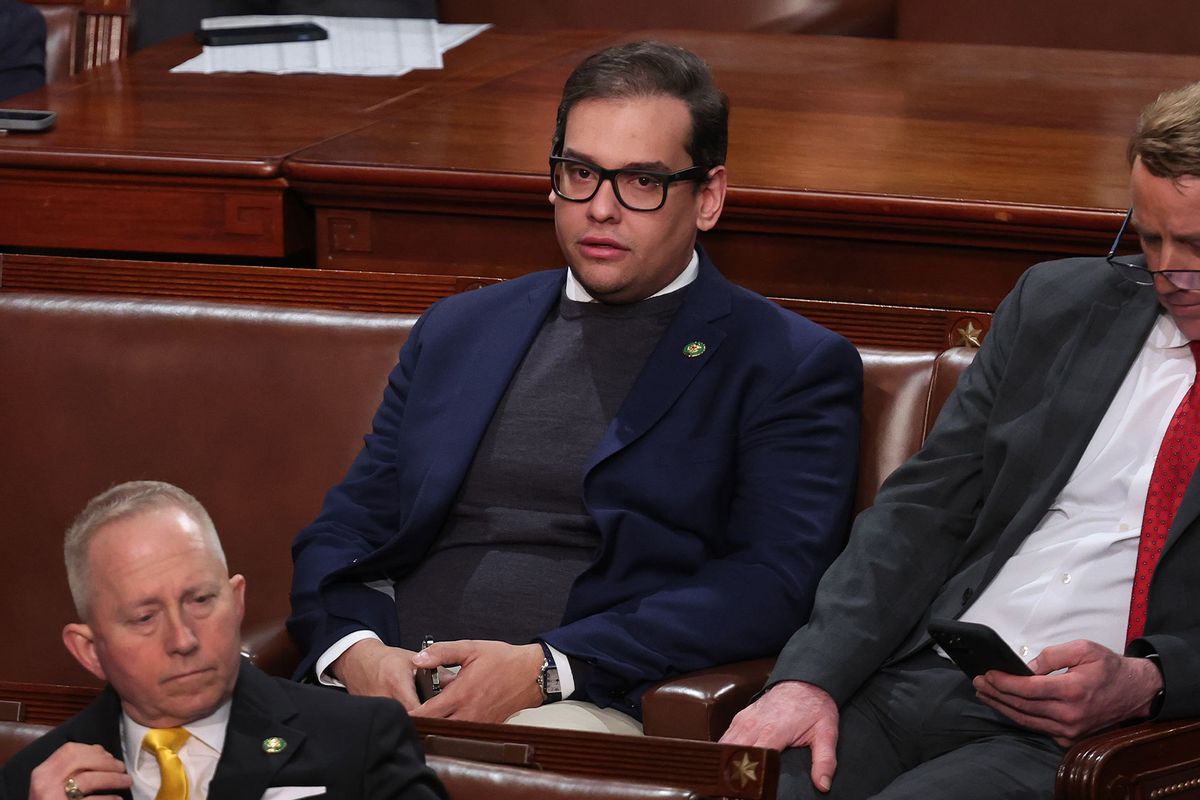 U.S. Rep.-elect George Santos (R-NY) watches proceedings in the House Chamber during the third day of elections for Speaker of the House at the U.S. Capitol Building on January 05, 2023 in Washington, DC. (Win McNamee/Getty Images)
--

Embattled Rep. George Santos, R-N.Y., has admitted to fabricating a number of aspects of his life and career but has denied having been a "performer" at drag events in his native Brazil. But former friends and artificial intelligence photographic analysis tools say otherwise.

The latest controversy for the far-right Republican began on Wednesday after Eula Rochard, a popular drag queen in Rio de Janeiro, accused Santos of having participated in drag events in 2007 and 2008 before he moved to the United States and began creating a new identity as a far-right Republican who openly aligned himself with anti-LGBT Christian supremacists who have accused drag performers of trying to sexually abuse children.

The accusation was first reported by journalist Marisa Kabas, who also reprinted a low-quality photo that Rochard said was of Santos and herself.

After Kabas's report spread like wildfire around the internet and through political Washington, Santos issued a vehement denial of the allegation early Thursday morning.

"The most recent obsession from the media claiming that I am a drag Queen or 'performed' as a drag Queen is categorically false," the far-right Republican wrote on Twitter. "The media continues to make outrageous claims about my life while I am working to deliver results."

Santos's angry disputation was soon undermined after Rochard released a high-quality photo which appeared to show Santos wearing the same red feathered dress as in the first image.

Many critics also noted that Santos had not actually denied the accusations.

"When Santos carefully says he didn't 'perform' as a drag queen and isn't presently a drag queen, he's not denying that report," Will Saletan, a writer for the conservative website The Bulwark, replied to the GOP congressman's tweet.

Reuters reported on Thursday evening that an anonymous former friend of Santos said that he had participated in multiple drag queen beauty pageants and that Santos had aspired to be Miss Gay Rio de Janeiro.

The person in the red dress shared by Rochard appears to closely match known photos of Santos available from his social media accounts and official government portraits.

An artificial intelligence-based comparison of the red dress photo with a known image of Santos performed by TYT using Amazon's Rekognition service found that there was a 98% chance that Santos was the person depicted in the image produced by Rochard.

Although the use of AI facial recognition has been controversial when used exclusively, studies have shown that it can be useful as corroboration for human observation.

"Societies rely on the expertise and training of professional forensic facial examiners, because their judgments are thought to be best," Alice O'Toole, a professor of cognitive science at the University of Texas at Dallas, observed about a 2018 study of AI and human identification of faces she co-authored for the National Institute of Standards and Technology. "However, we learned that to get the most highly accurate face identification, we should combine the strengths of humans and machines."

Santos has faced many calls to resign from Congress after he admitted to having falsely claimed to be Jewish and that he had lied about his education and career experience. Critics have also accused the New York Republican of stealing money from an online fundraising campaign meant to help a dying dog, an allegation he has denied. Santos has also earned the ire of many LGBT activists for pandering to extremist Christians who put forward bigoted attacks on gay men and drag performers.

"The Left is hellbent on creating a false narrative because they want to groom our kids," Santos wrote in an April Facebook post in favor of a Florida law which banned lesbian and gay teachers from talking about their marriages. "As a gay man, I UNAPOLOGETICALLY support this law!"

Santos's drag denials were even further undermined by a New York Post report about a 2005 video which shows a man resembling Santos claiming to have performed at various drag clubs in Rio de Janeiro.

TYT National Correspondent Matthew Sheffield reports about politics, media, and technology. You can follow him on Twitter or on Mastodon.