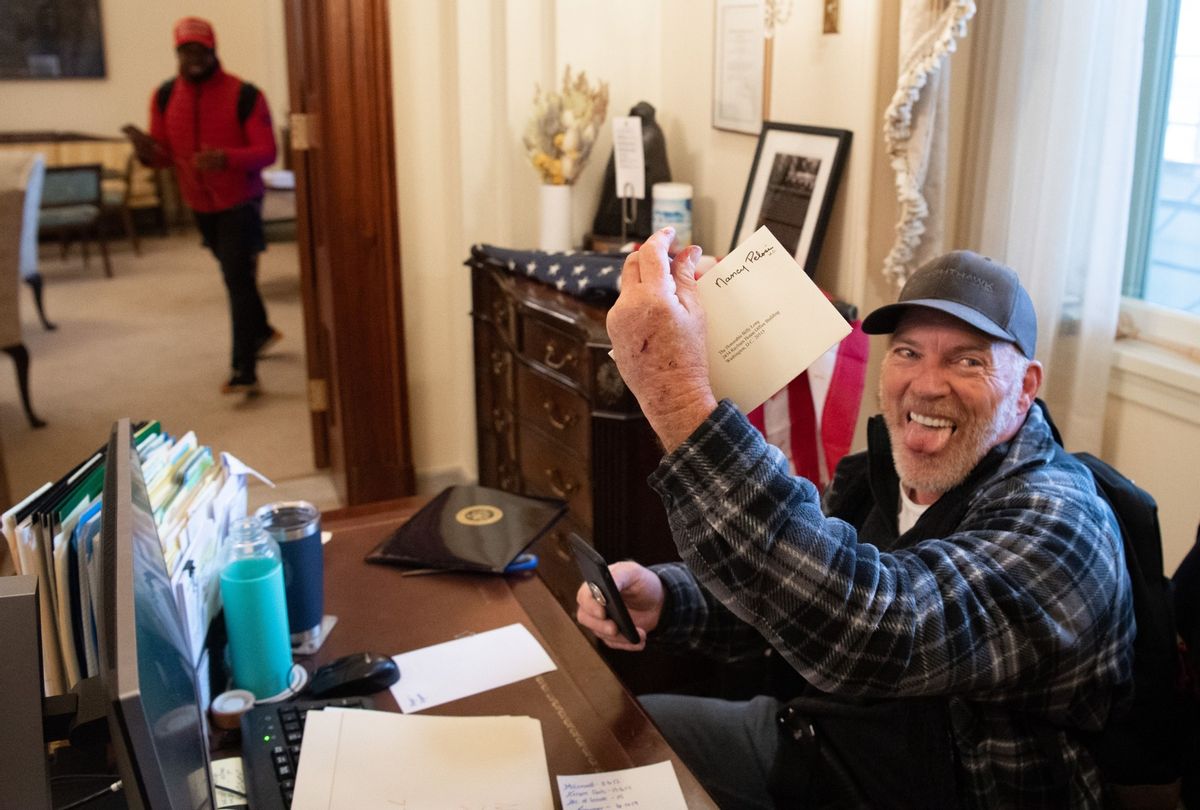 Richard Barnett, a supporter of US President Donald Trump, holds a piece of mail as he sits inside the office of US Speaker of the House Nancy Pelosi after protestors breached the US Capitol in the US Capitol in Washington, DC, January 6, 2021. (SAUL LOEB/AFP via Getty Images)
--

An attorney for an Arkansas man who was photographed with his feet on then-House Speaker Nancy Pelosi's desk complained that the trial was unfair after he was convicted for his role in the Jan. 6 insurrection.

Richard "Bigo" Barnett was found guilty Monday on all eight counts, including four felonies, following less than two hours of deliberation by a jury in U.S. District Court in Washington, and outside the courthouse his attorney complained the case was decided by individuals who had most likely voted for President Joe Biden.

"No. 1, it's not a state," said defense attorney Joseph McBride. "No. 2, he's not surrounded by a jury of his peers, a jury of people from Arkansas, a place where he came from, or a jury that has a political composition of anything that's like the rest of the United States. Washington, D.C., is something like 95, 96 percent Biden voters, right. We believe that that plays a crucial role in the political factors that are ever present in these cases."

McBride had sought unsuccessfully to have the trial moved to another venue, and he signaled that may play a role in a possible appeal.

"We're not saying there is something inherently wrong with D.C. or with the jurors." McBride said. "We're saying that we believe politics is the big elephant in the room that nobody wants to speak about here and political considerations about this trial have damaged the jury pool to the extent that we can't get a fair trial."

The 62-year-old Barnett testified in his own defense, saying he had acted like a "f*cking idiot" during the attack on the U.S. Capitol.

The most serious charge he faced, obstructing an official government proceeding, carries a maximum penalty of 20 years in prison, but federal sentencing guidelines will most likely recommend a shorter sentence.