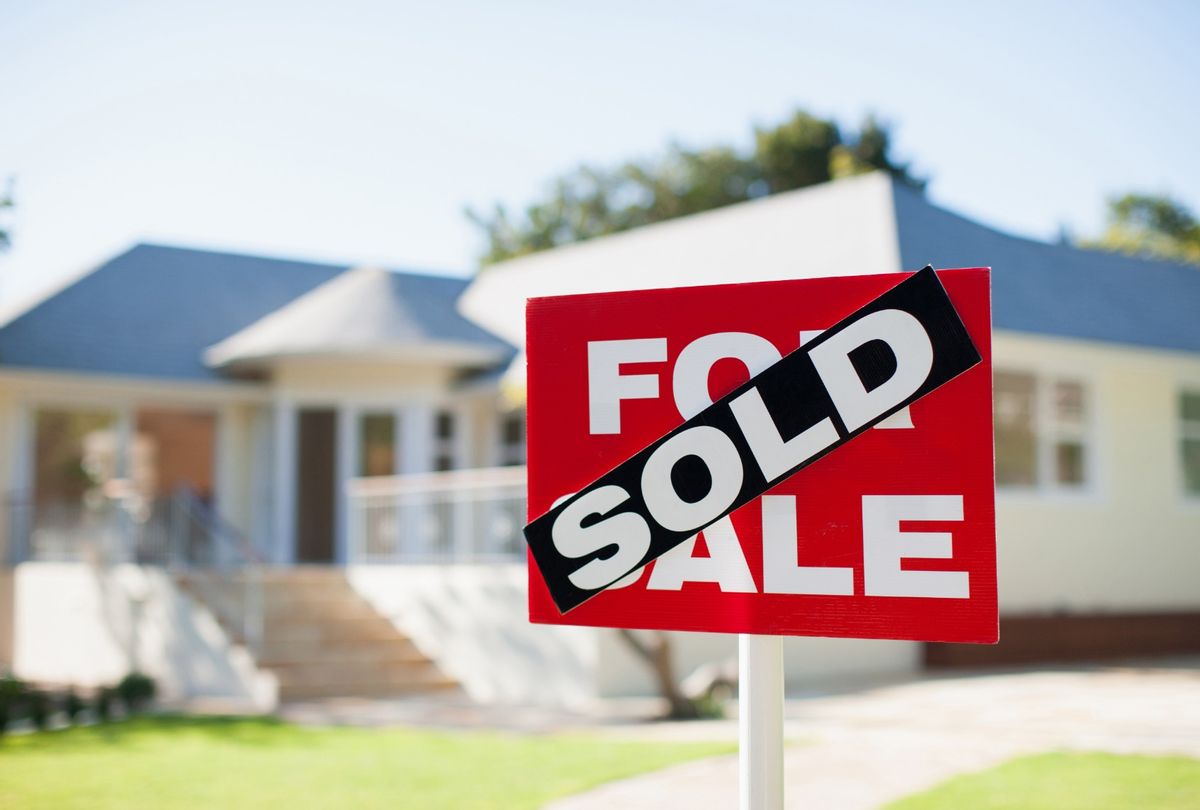 For sale sign in yard of house. (Martin Barraud/Getty Images)
--

It's a bit dystopian to contemplate.

What are we to make of a world where we are increasingly reliant on the latest technology, but our socioeconomics have come to resemble something more Medieval where our planet is increasingly dominated by a relatively small coterie of extraordinarily wealthy individuals?

Over the arc of the first two years of the pandemic the world's richest one percent pocketed two thirds of the new wealth generated from December 2019 to December 2021, according to an analysis put out by Oxfam, the anti-poverty non-profit. That means that for every dollar of new wealth being made by a worker in the bottom 90 percent, a billionaire realized $1. 7 million.

"Although billionaire fortunes have fallen slightly since their peak in 2021, they remain trillions of dollars higher than before the pandemic," Oxfam said in its report timed for the annual meeting of the World Economic Forum in Davos, Switzerland. "This crisis-driven bonanza for the super-rich has come on top of many years of dramatically growing fortunes at the top, and growing wealth inequality."

How does the 21st century wealth pyramid building work?  How does this global trend manifest itself here in New Jersey? Brick by brick.

LARGESE FOR THE ALREADY LARGE

Consider Gov. Murphy's decision to let the state's Corporate Business Tax Surcharge expire at the end of the year. The CBT is only paid by the most massive and profitable corporations and zeroing it out delivers these behemoths like Amazon a $600 million recurring windfall.

"This is a tax cut for some of the biggest businesses in the world, plain and simple," wrote Nicole Rodriguez, president of New Jersey Policy Perspectives, a non-profit progressive think tank. "With corporate profits at record levels and millions of New Jersey families struggling to keep up with rising costs, this represents the absolute worst of trickle-down economics."

Need proof of just just how Medieval Murphynomics are?

Consider that his recurring $600 million windfall for anti-union giants likes Amazon  is six times the $100 million the NJ AFL-CIO and its constituent unions like 32 BJ SEIU and HPAE, the state's largest healthcare union,  asked for to cover hazard pay for the tens of thousands of essential workers who put themselves and their families lives at risk during COVID.

Like any macroeconomic trend, this epoch transfer of all wealth to the top Murphy facilitates plays out in the landscape all around us as the security of home ownership gives way to the predations of terminal tenancy.

Across the country, anonymous LLCs are buying up single family homes at such an alarming rate that housing activists are warning the trend is increasingly putting home ownership out of the reach of first-time buyers particularly in communities of color.

"Investors bought 24 percent of all single-family houses sold nationwide last year, up from 15 percent to 16 percent annually going back to 2012," according to a Stateline analysis of data provided by CoreLogic, a California-based data analytics firm. "That share dipped only slightly in the first five months of 2022 to 22 percent."

In Newark, New Jersey's most populous city, researchers at the Rutgers Center on Law, Inequality and Metropolitan Equity (CLiME) documented that between 2017 and 2020, such purchases accounted for 47 percent of all home closings, more than twice the current national rate.

"This is a threefold increase in investor purchases since 2010, when less than 20 percent of all residential sales were to institutional buyers," according to CLiME's report. "Who Owns Newark-Transferring Wealth from Newark Homeowners to Corporate Buyers. "These trends are part of a national pattern. Limited liability companies, often backed by largescale equity investment, became active in residential real estate during the Great Recession and foreclosure crisis."

CLiME's analysis continues. "Yet these trends demonstrate the strong probability of rapidly rising rents, lower homeownership rates, a diminished Black middle class, market challenges to building affordable homes, even more housing instability for low- and moderate-income Newarkers and displacement. What has happened in other cities and neighborhoods has been happening in Newark—but on a scale unmatched anywhere in the country."

Luckily for the residents of Brick City, aka Newark, the administration of Mayor Ras J. Baraka and the City Council are both paying attention. Last week, the Newark Municipal Council gave final approval to an ordinance promoted by Baraka requiring deed restrictions on sales of up to 50 percent of city-owned properties, requiring them to remain affordable for 30 years.

"The deed restrictions apply to the sale of vacant lots as well as homes and to the sale of properties by the Newark Land Bank as well as direct sales by the City of Newark," according to city's press release. "The measure also gives certified non-profit housing developers the right of first refusal in the purchase of city-owned properties."

The ordinance was a recommendation contained in CLiME's "Who Owns Newark," research report authored by David D. Troutt, Distinguished Professor of Law, Director of the Rutgers Center on Law, Inequality and Metropolitan Equity and a member of the City's Equitable Growth Advisory Commission."

"In cities and even suburbs across America, LLCs are eroding the American dream of homeownership as they convert owner-occupied homes into corporately owned rental units," Mayor Baraka said. "In Newark, where we have worked hard to expand homeownership, we have created a strategy to do everything possible to fight this dangerous trend. The CLiME report is proof that Newark must enact and enforce stronger and more equitable laws, regulations, and policies to ensure that all residents share in the growth of our city."

This latest initiative follows up a 2022 municipal ordinance designed to pierce the corporate veil of secrecy that shrouds limited liability companies (LLCs) that are gobbling up Newark's limited housing stock by compelling they register as a responsible agent in the State of New Jersey.

"Our report shows that the national trend of investor buying of one-to-four-unit homes in predominantly Black neighborhoods is acute in Newark where almost half of all real estate sales were made by institutional buyers," Dr. Troutt said in the City Hall press release. "This trend grew out of the foreclosure crisis that wiped out significant middle-class wealth in Newark. Mayor Baraka's actions are important steps toward maintaining affordability of rents and homeownership, discouraging speculation and demanding transparency of ownership."

The stakes are high.

"Sadly, this reality continues a long pattern of economic threat to predominantly Black and increasingly Latino neighborhoods in a state whose communities are among the most segregated in the country," Dr. Troutt's seminal report states. "From racial exclusion to predatory lending, from foreclosure to the extraction of rents, Newark's experience demonstrates what can happen when local economies ignore equity…These trends demonstrate the strong probability of rapidly rising rents, lower homeownership rates, a diminished Black middle class, market challenges to building affordable homes, and even more housing instability for low- and moderate-income Newarkers and displacement."

The gap between White and Black homeownership rates is wider now than it was in 1960, when housing discrimination was rampant and legal, U.S. Census Bureau data shows. In 2022, 74.6 percent of White households owned their homes, compared with 45.3 percent of Black households — a gap of more than 29 points.

Don't be fooled by State of the State happy talk. We're moving backwards brick by brick.