In the wake of a massive leak by the whistle-blowing group, evidence emerges of an active criminal investigation

In the wake of a massive disclosure of Guantanamo files by WikiLeaks, the FBI yesterday served a Grand Jury subpoena in Boston on a Cambridge resident, compelling his appearance to testify in Alexandria, Virgina.  Alexandria is where a Grand Jury has been convened to criminally investigate WikiLeaks and Julian Assange and determine whether an indictment against them is warranted.  The individual served has been publicly linked to the WikiLeaks case, and it is highly likely that the Subpoena was issued in connection with that investigation.

Notably, the Subopena explicitly indicates that the Grand Jury is investigating possible violations of the Espionage Act (18 U.S.C. 793), a draconian 1917 law under which no non-government-employee has ever been convicted for disclosing classified information.  The most strident anti-WikiLeaks politicians -- such as Dianne Feinstein and Newt Gingrich -- have called for the prosecution of the whistle-blowing group under this law, and it appears that the Obama DOJ is at least strongly considering that possibility.

The investigation appears also to focus on Manning, as the Subpoena indicates the Grand Jury is investigating parties for "knowingly accessing a computer without authorization" -- something that seems to refer to Manning -- though it also cites the conspiracy statute, 18 U.S.C. 371, as well as the conspiracy provision of the Espionage Act (subsection (g)), suggesting that they are investigating those who may have helped Manning obtain access.  The New York Times previously reported that the DOJ hoped to build a criminal case against WikiLeaks and Assange by proving they conspired with Manning ahead of time (rather than merely passively received his leaked documents).  Also cited is 18 U.S.C. 641, which makes it a crime to "embezzle, steal, purloin, or knowingly convert . .  any record, voucher, money, or thing of value of the United States."

The serving of this Subpoena strongly suggests that the DOJ criminal investigation into WikiLeaks and Assange continues in a serious way; perhaps it was accelerated as a result of this latest leak, though that's just speculation.  It also appears clear that the DOJ is strongly considering an indictment under the Espionage Act -- an act that would be radical indeed for non-government-employees doing nothing other than what American newspapers do on a daily basis (and have repeatedly done in partnership with WikiLeaks). The Subpoena is here; the two page letter accompanying the Subpoena are below (click on images to enlarge): 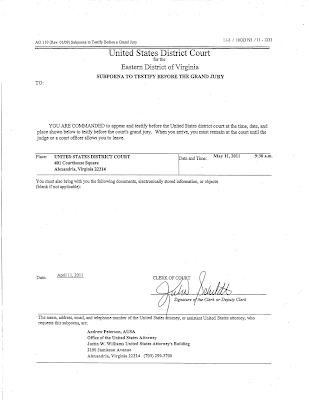 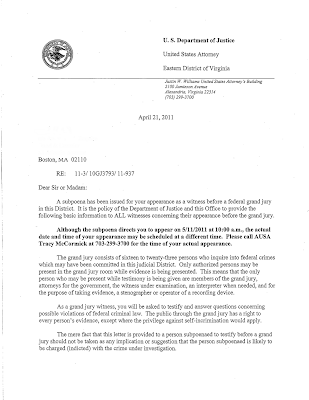 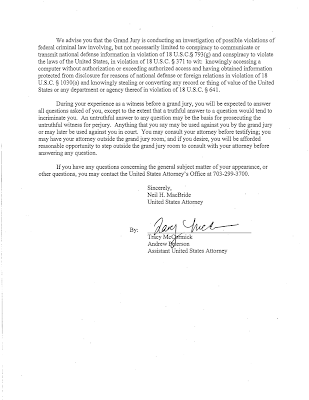