Pick of the week: Lost in Stanley Kubrick's labyrinth

Pick of the week: From the Minotaur to the moon landing, "Room 237" probes the cult theories around "The Shining" 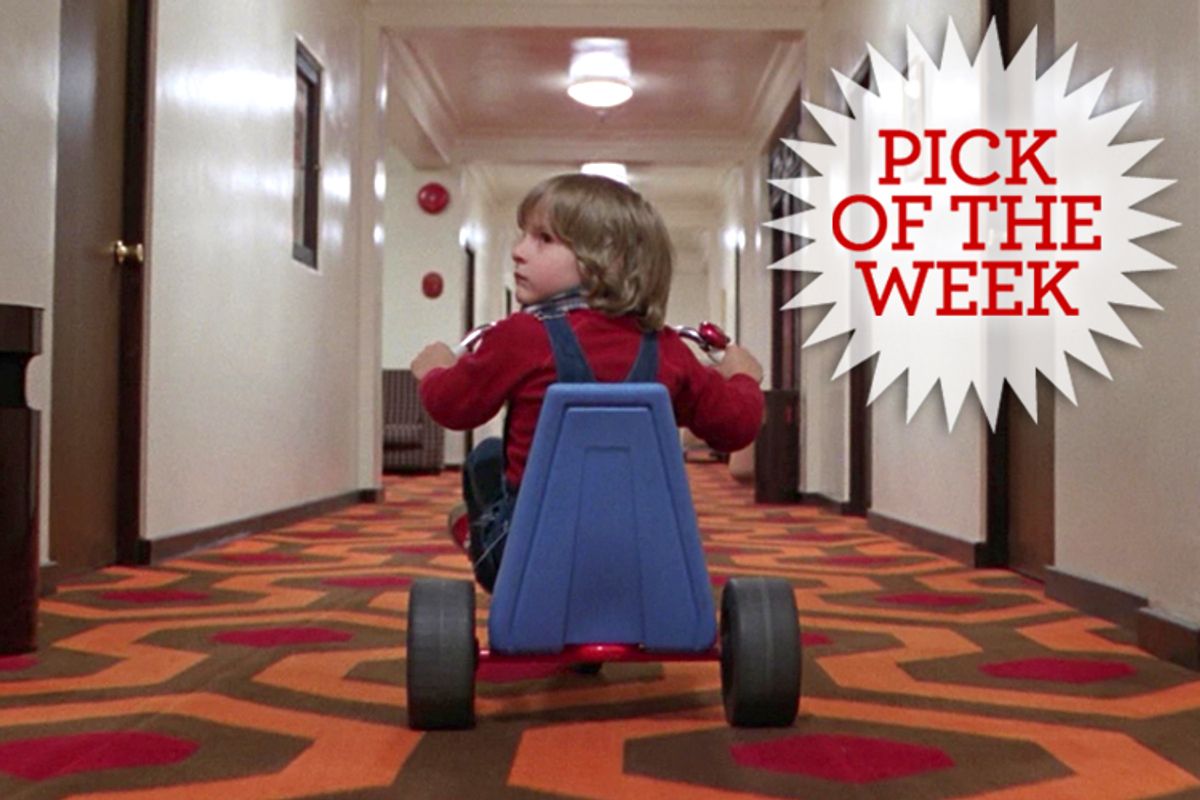 It’s entirely possible that no movie in the history of the medium has attracted the same combination of film-school erudition, amateur scholarship and fanboy and/or fangirl intensity as Stanley Kubrick’s “The Shining.” At first glance that might seem baffling: Although Kubrick’s adaptation of Stephen King’s bestselling horror novel was an eagerly anticipated film starring Jack Nicholson and Shelley Duvall, with a big-name director attached, it got middling reviews (or worse) on its 1980 release, and wasn’t a major hit. But give the Kubrick cultists and conspiracy-theory decoders full credit; over the years they have transformed “The Shining” from flop to classic, and it’s now widely understood as an enigmatic and literally labyrinthine masterwork that contains multitudes.

Rodney Ascher’s extraordinary, copyright-defying documentary “Room 237” – “Shining” aficionados will immediately grasp the reference – serves as an introductory primer to the madness and genius of the various “Shining” theories. It does so in hypnotic fashion, stitching together dozens of clips from that film along with Kubrick’s other features (although I didn’t notice anything from “Spartacus”) and an eclectic range of cinematic touchstones stretching from F.W. Murnau’s 1926 “Faust” to “All the President’s Men” to the 1982 “Creepshow,” a collaboration between King and director George A. Romero. We learn along the way that “The Shining” may be read as a commentary on the Native American genocide (a persistent and at least somewhat convincing hypothesis) or on the Nazi Holocaust, is a study in sexual demonology or a coded apologia for Kubrick’s having helped NASA fake the moon landing.

Ascher originally conceived the project with producer Tim Kirk as a series of short films that inexorably grew into a feature, and one question the two never directly confront is: Why “The Shining”? There are any number of other films that arguably contain symbolic or subterranean meanings, and similar if less enduring cults have grown up around “Donnie Darko,” “Mulholland Drive” and “Inception,” to name but a few. (The learned disquisitions I received last year about “Prometheus” have pretty much stopped coming.) I think it’s not actually that mysterious: “The Shining” was misunderstood or undervalued at first, which is always a seductive plot twist. It inhabits a unique sweet spot where genre-movie fandom, the mainstream audience and art-house cinephilia overlap. It’s a horror movie based on a widely read novel that was seen by millions of people, and also the work of a reclusive genius known for his immense erudition and fanatical attention to detail.

Christopher Nolan, for example, is a far more popular filmmaker than Kubrick ever dreamed of being, but Nolan’s movies are a little too mainstream and his puzzles too front-loaded, so to speak, to excite a similar degree of academic fervor. As Kirk told a New York Times reporter last year, one of the characteristics of “The Shining’s” cult following is its serious demeanor: “We don’t have guys having ‘Shining’ weddings, or driving around in yellow VWs with ‘ROOM 237’ license plates. There were no conventions to go to.” On the other side of the ledger, while one could certainly devote much of one’s life to an archaeological dig below the surface of Andrei Tarkovsky’s “Stalker” – an ambiguous science-fiction masterpiece that reached American viewers the same year as “The Shining” – the universe of people who have seen that film, or even heard of it, is microscopic by comparison. (At the “Stalker” convention, I’ll be the guy with the “AT” police helmet and the endlessly ringing telephone.)

So what about “The Shining,” anyway? Does one or more of the theories presented in “Room 237” (or elsewhere, as in the endless Internet theses posted by the writer Kevin McLeod, aka Mstrmnd, which compare Kubrick favorably to Heraclitus, Caravaggio and Velázquez) explain it all, and can others be laughed off as nonsense? Well, my answers might be different from yours, first of all. And more important, Ascher’s movie is made in a generous and even profligate spirit, with an ominous undertone worthy of the Overlook Hotel itself: This movie about a labyrinth with a monster at its center is itself a labyrinth, he tells us; better leave a trail of breadcrumbs behind you if you hope to get out.

As playwright and novelist Juli Kearns, one of the most convincing interviewees in “Room 237” (and the only woman), explains, the internal geometry of Kubrick’s hotel operates with a dreamlike non-logic, full of impossible switchbacks and reversing patterns, and with an exterior window (in the hotel manager’s office) where no window could possibly be. Much of the fun of “Room 237,” which has been an audience smash at festivals from Sundance to Cannes, Toronto and Austin’s Fantastic Fest, comes from Ascher’s dedication to explore these theories to their fullest. So we see graphic overlays of Kearns’ maps of the Overlook, featuring the circuitous and contradictory pathways through the corridors followed by Danny (Nicholson and Duvall’s son in the film) on his Big Wheel tricycle.

I would tentatively divide the “Shining” theories into two conceptual groupings: those that open up the film and those that tend to close it down. Kearns’ reading of “The Shining” as a symbolically loaded reworking of the myth of Theseus and the Minotaur, or John Fell Ryan’s fascinating contention that the film is a kind of visual palindrome that can be viewed both forward and backward (or both at the same time), may be cracked or overly adventurous in places. But these approaches are inherently intriguing and to a large extent pose questions rather than answer them. They do not foreclose other possibilities, such as – just to take a wild leap here – that it’s a tale about male madness, writer’s block and the oppressive force of the past.

Way out in the other direction, we have New Age-flavored conspiracy maven Jay Weidner, who thinks the entire movie is Kubrick’s coded confession and explanation of his involvement with NASA’s fake moon landing (or, actually, with NASA’s fake film of the moon landing, since Weidner finesses the point of whether or not Neil Armstrong et al. actually went to the moon). Maybe Ascher and Kirk put Weidner in the movie as a reality check for “Shining” enthusiasts: Spend enough time in the Overlook, and this is how you end up. A less extreme version of this overemphasis on a handful of ambiguous clues can be found in the various theories about a hidden narrative of sexual abuse or sexual predation in the film, presumably involving Danny and his father, Jack (Nicholson).

Now, it’s perfectly valid to raise the specter of sexual abuse as a troubling possibility in “The Shining,” but not (in my view) as an explanation that renders all other avenues of discussion irrelevant. I feel the same way about former ABC News reporter Bill Blakemore’s influential thesis that “The Shining” is a parable about the extermination of American Indians, first aired in a Washington Post article published in 1987. I mean, Blakemore is clearly onto something: Kubrick and co-writer Diane Johnson introduced the idea that the Overlook is built on an Indian burial ground (which isn’t in the novel), and elements of Native American iconography and design recur throughout the film, too often to be pure coincidence.

But here’s what we actually know about “The Shining”: Kubrick and Johnson relied extensively on ideas drawn from Freud’s famous essay on “The Uncanny,” and as much as Stephen King disliked the movie, they also stuck closely to King’s central theme (not just in this book but in most of them), which is that every seemingly normal man contains the potential for monstrous behavior, especially toward his own family. Insisting on a singular and hidden “Da Vinci Code” secret, on the idea that the film’s surface is irrelevant and that it “means” X but does not mean Y, overlooks first of all this central and dark but pretty much non-hidden secret of human society. Furthermore, it flies in the face of both common sense and everything we understand about how art is created, including the fact that an artist’s conscious intentions are not always decisive.

Isn’t it more plausible to suggest that the Indian-genocide references and the disturbing sexual undercurrents and the Minotaur labyrinth, and just possibly the Holocaust allusions that historian Geoffrey Cocks claims to discern, are strategic elements meant to accentuate the mood of menace and “uncanniness,” but that none is meant to predominate in itself? In other words, this really is a story about a guy going crazy in a snowbound old hotel and turning on his wife and kid, but one that draws on the most troubling aspects of myth, history and psychoanalytic theory to create an overdetermined landscape of madness, one in which the viewer ultimately feels almost as disoriented as Jack, frozen in permanent rage at the heart of the labyrinth.

I’m not saying that all these theories are created equal or that interpreting works of art is a democratic process. I won't even bother debunking Weidner’s moon-landing thesis, which fails in exactly the same way as all other paranoid conspiracy theories. And there is definitely no hidden boner-shot in Jack’s interview with the manager and no secret Stanley Kubrick face in the clouds behind the opening credits. But even these ludicrous notions illustrate the real point of “Room 237,” as I see it, which is that “The Shining” is a disturbing, complicated and highly unusual creation of pop cinema that works on many levels, and whose slow-acting toxin continues to spread through our cultural veins more than 30 years later.