Alyssa Mae is a senior journalism major at the University of Nebraska-Lincoln. She graduated from Yutan High School in Nebraska, began her college career in fashion design, but switched to journalism her sophomore year. Alyssa recently was part of an in-depth reporting class that won the Ronald F. Kennedy Grand Prize for work over White Clay, Nebraska. She has worked for The Daily Nebraskan, the Lincoln Journal Star and the Gretna Guide and Post as a journalist and a photojournalist. She plans on starting a career path in freelance documentary work. She currently owns a small video production company. Alyssa joined the Salon Young American team in hopes of giving a voice to constantly changing Nebraskan political landscape. As a native Nebraskan, she feels there are a lot of layers to her home state that need to be explored, and she hopes to shine a spotlight on areas that could give a better idea on where Nebraska stands in the currently presidency. Read more at alyssamaemedia.com. 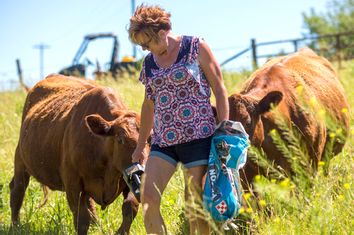 "We don’t have a day off": A Nebraska cattle family pins its hopes on change Alyssa Mae
Page: 1