"We don’t have a day off": A Nebraska cattle family pins its hopes on change 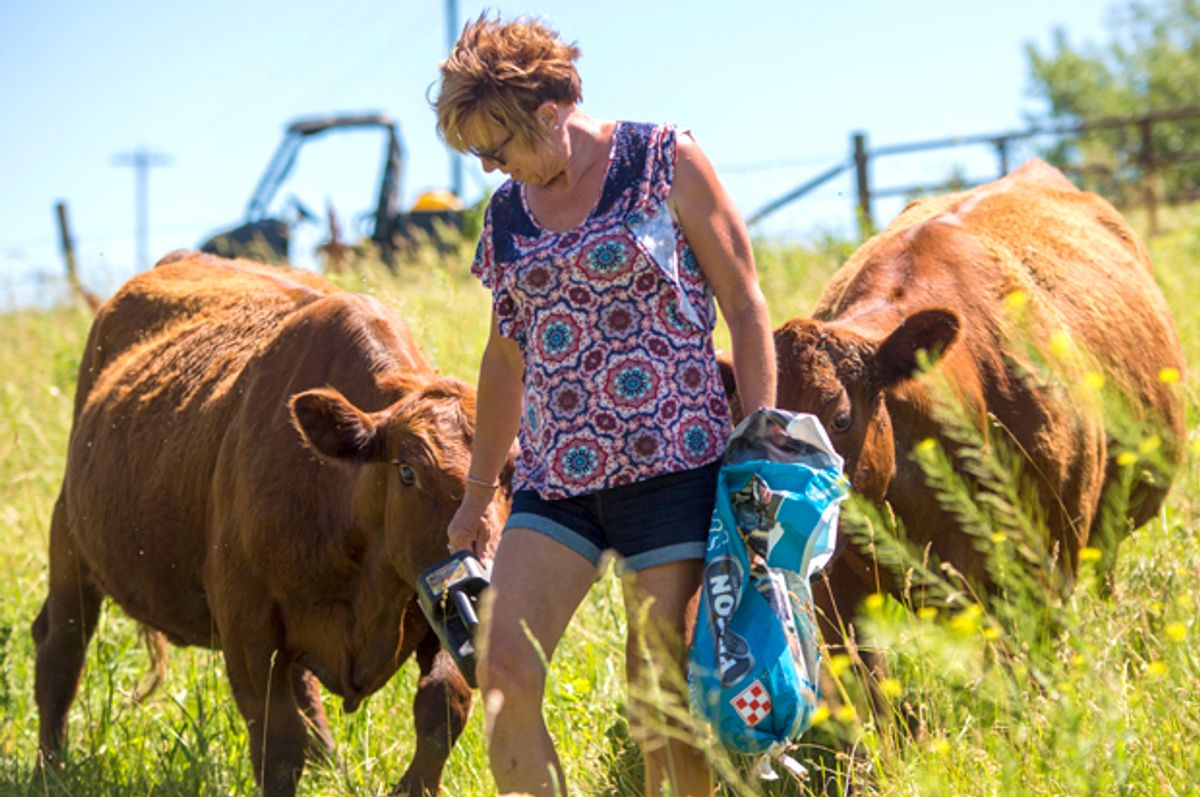 Doug Heavican is a man of few words, a closet of button up plaid shirts and a collection of John Deere tractor models lining his basement walls. Every morning he pulls on his mudded cowboy boots and faded mustard work gloves. He marches across grassy fields, fields his family has owned for 52 years, and climbs the metal steps of his John Deere tractor to feed the 228 heads of cattle that keep his family financially afloat.

“I like feeding the world a good product,” Heavican said recently. “Makes my mouth water every time I look at one.”

For a long time, the farm didn’t have any animals. After his father died, Heavican struggled to maintain the workload needed to maintain cattle. He decided to sell the cattle and focus on farming.

But in 2006, the first cow, Martha, was reintroduced to the farm in the back of a pickup. Heavican and his wife, Sandy, work 12 hours a day with the occasional help of their 21-year-old son, Kellen, a broadcasting major at the University of Nebraska-Lincoln. They sort and care for their cattle, plant and harvest 1000 acres of corn and soy and maintain their grazing land.

“As long as he’s got cattle to feed or there is cattle on the place, we don’t have a day off,” Sandy Heavican said.

“I’m not the average farmers wife,” she said. “I can’t wear muck boots and jeans all the time.” She didn’t grow up with cattle, but found her own passion once the family began calving, or birthing calves to sell. Her family often jokes about her worry over the calves and their mothers.

“She always hovers,” Kellen said. “We keep telling her to go back inside or she’ll bother them.”

The Heavican family loves what they do. Sandy walks amongst their calving cows and heifers, calling each one by name as they check each one for illness. Each morning, Doug comes in from feeding the steer, announcing his love for his work to his wife.

“He’ll come in from the winter time and say, ‘Oh, I just love feeding my cattle,'” said Sandy.

But for the last four years the family has struggled. In 2014 and 2015, the Heavicans had to consider selling their farm due to the volatile nature of the cattle market. In the cattle industry, there is a long time gap between when the calf is born and when it is ready for slaughter, according to the Great Falls Tribune. This makes it difficult for the buyer and seller to know what their investment is worth.

Sandy said they aren’t the only farmers taking hits from the market. She said the last eight years have been difficult on all Nebraskan farmers because income is going down due to the markets. However, taxes and insurances rates are increasing.

“Farmers on their income tax haven’t showed a profit what-so-ever,” she said. “There’s some that if they show a loss again this year, the banks won’t loan them money to farm next year.”

Doug and Sandy Heavican see hope with the new presidency. Both said there are major flaws in President Trump’s tactics, but believe his business experience will help them out of their own financial trouble. “Trump is a business man. Not a politician,” Sandy Heavican said. “He knows how to make money, and he’s also lost money.”

Kellen disagrees with his parents’ opinion of Trump, but said he can understand why there is so much support for President Trump in rural areas. He said Nebraska farmers felt ignored and were looking for change. They saw that change in President Trump.

“When someone comes around and says he’s going to change Washington just like he did, it appeals to the normal white class rural Americans,” he said.

Some Nebraskan cattle farmers are finding hope in a new trade deal with China.

Despite President Trump’s campaign promise to reduce trade with China, Trump has agreed to negotiations on a new trade deal on June 12, 2017. The trade deal will allow the U.S. to export beef and natural gas to China in exchange for opening the U.S. market for cooked poultry and Chinese banks, according to CNN. Tracy Brunner, President of the National Cattlemen’s Beef Association, released a statement in response stating that “American cattle producers are already losing out on $400,00 in sales every day because we don’t have TPP.”

However, as small-time cattle farmers, the Heavicans’ said they haven’t felt any impact since the withdrawal from the TPP. They remain optimistic that the trade with China and Trump’s new policies will help Nebraskan farmers.

But they also agree it’s too soon to say.

“Ask me in about two years if Trump stays in office that long,” Doug Heavican said.

Alyssa Mae is a senior journalism major at the University of Nebraska-Lincoln. Alyssa graduated from Yutan High School in Nebraska, began her college career in fashion design, but switched to journalism her sophomore year. Alyssa recently was part of an in-depth reporting class that won the Ronald F. Kennedy Grand Prize for work over White Clay, Nebraska. Alyssa has worked for The Daily Nebraskan, the Lincoln Journal Star and the Gretna Guide and Post as a journalist and a photojournalist.