The things we carry

You have 30 minutes and two garbage bags: How do you pack for a disaster? 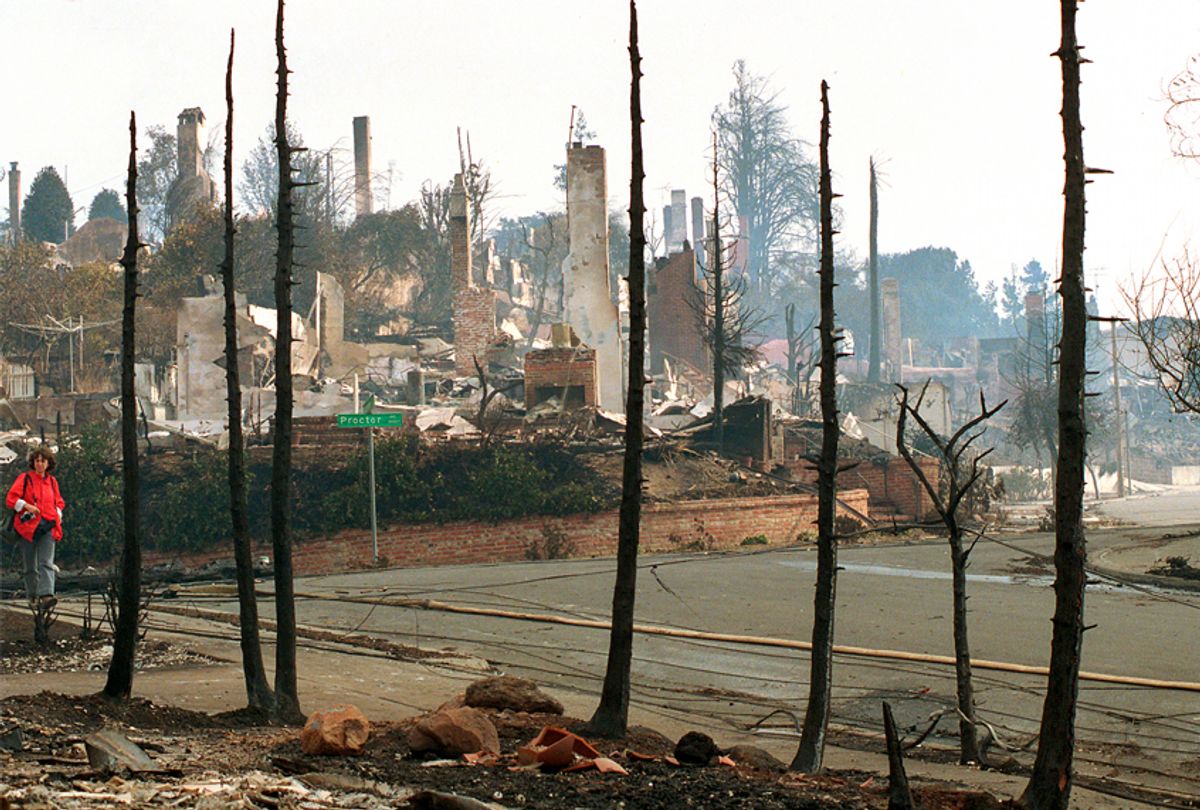 There's the 30-second warning, the one-minute warning, the sirens screaming, alerting you that it is sweeping toward you right now, whatever it is, and you must grab what you can and run. This is not actually so difficult -- what to grab, I mean. You heave your children into the car; you heave the pets in behind them; you sprint back upstairs for the photo albums. That's the 30-second grab: the photo albums. You wrestle one of those black plastic trash bags off the roll and fill it in one sweep of the arm and drag the loaded bag toward the front door. If you have the extra 30 seconds, you stop on the way to grab the youngest child's stuffed monkey and the computer, but the computer takes time; there are those plugs and wires to wrestle with, and you're probably dinging the circuitry slinging it around like that anyway, and where are you going to put it in the 15 seconds you have left -- in the trunk with the trash bag of photo albums? You just go.

Survival pares the possibilities. As my Oakland, Calif., neighborhood went up in flames on a high-wind dry October day eight years ago, my friend up the hill had no time even for the photo albums. The fire was coming at them too fast. Of all that she lost, which was everything, it was the pictures that still make her feel the sickest.

But we were 12 blocks down. Our street was in smoke but not in flames. When our evacuation order came, we had 30 minutes. I imagine that the millions of people in the path of Hurricane Floyd have had something like this happen to them this week: a half hour, two cars, the sirens at full cry, the electricity already gone, the storm fierce enough to level everything. The back seats and trunks will only hold so much. What? What do they take? What does "replaceable" mean? Are they standing in their dining rooms as the air grows dark, the opened trash bags on the floor behind them, trying to wrap clay nursery-school menorahs in newspaper fast enough to get to the next room?

The modest advance warning, in disaster evacuation, forces you into a fierce and strangely exhilarating inventory of the items you have accumulated around you, a few of which, if they are portable enough, may now follow you into whatever comes next. I remember staring at the bookcases and framed wall photos as I wrapped, working the mental triage: yes, the picture of my Russian great-grandparents, in black and white, heads together; yes, my husband's mother and father, in romantic rapture on a World War II home leave; yes, the boxes that hold Bill's dead father's war medals. Bill's penny collection, in the closet upstairs -- no, too heavy, no sentiment. Kids' clothes, cookbooks, dishware, CDs -- no, we don't care. Bill's fountain pen collection -- yes, he loves them, into the bag. Clothes? No. Well, maybe the black blazer, makes me feel capable, that will matter if the house burns, OK, into the bag. Journals, from the back of the closet. The entire shelf of stuffed animals from my daughter's room -- easy, upend the shelf into the trash bag, we'll be living in some rental apartment and she'll have something familiar to look at. My son's soccer trophies, a handful of metal toy cars, the mangy bear he hides in his closet when his friends come over. The iron teapot somebody gave us for our wedding. The framed drawing from Buenos Aires.

There was, of course, a certain frantic, arbitrary quality to the filling of the trash bags, the sirens growing louder and the minutes ticking away, but in truth I was able also to work up a kind of dark satisfaction at the idea that the material items we loved most in the world were bagged and en route to safety with us while the lesser possessions were quite possibly about to go up in flames. (I'll be honest here -- I was rooting against three of Bill's ties.) And when my half hour was up and my car could hold no more -- Bill had already taken the children and headed across the Bay Bridge to their grandparents' house -- I stood on our sidewalk with my neighbor, who had sent his family south in their other car.

My neighbor said he supposed he had all the heirlooms that would fit in the Subaru. I said we had no heirlooms, which was just as well. Then I remembered that six months earlier my mother in Minnesota had inexplicably shipped me the family silverware, boxed and formally appraised, and that I had been so rattled by the arrival of this expensively pedigreed hand-me-down that I had hidden the box in the attic, where I thought thieves would not be able to find it. "Oh, hell," I said to my neighbor, "we do have an heirloom." He lent me his flashlight and I went upstairs one more time, the attic air thick with gathering smoke, me grubbing around amid boxes trying to remember where I had hidden the family silver. When I found it, I stuck it under one arm and came downstairs to hold it aloft for my neighbor; small parody of fireman triumphant, I thought. My mother would be pleased.

The fire never reached us. It wasn't until the next morning that we knew. The night we evacuated, my husband and I lay in the darkness on a spare bed at my father's house in San Francisco, listening to broadcast reports of the fire's progress block by block, imagining the flames, the things we had saved, the things we had chosen to leave. I felt no wave of anticipatory mourning, interestingly, until I remembered the pajamas: one small pair, blue and white, stuffed in the back of my son's closet. My son grew out of them when he was 3 and I had guessed, correctly, how completely the memory of that compact little body would leave me unless I kept some tangible item I could lay out once in a while to remember what it was like. The prospect of the pajamas burning filled me with panic, and some weeks later, when it was over, when the grandparent pictures had gone back up in the dining room and the smoke had been scrubbed off the walls, I found that I was grateful not only for the reprieve but for the chance to know how high a single pair of child's pajamas ranked among the things I valued most.

Cynthia Gorney is an associate professor at the Graduate School of Journalism at the University of California at Berkeley. She is the author of "Articles of Faith: A Frontline History of the Abortion Wars."