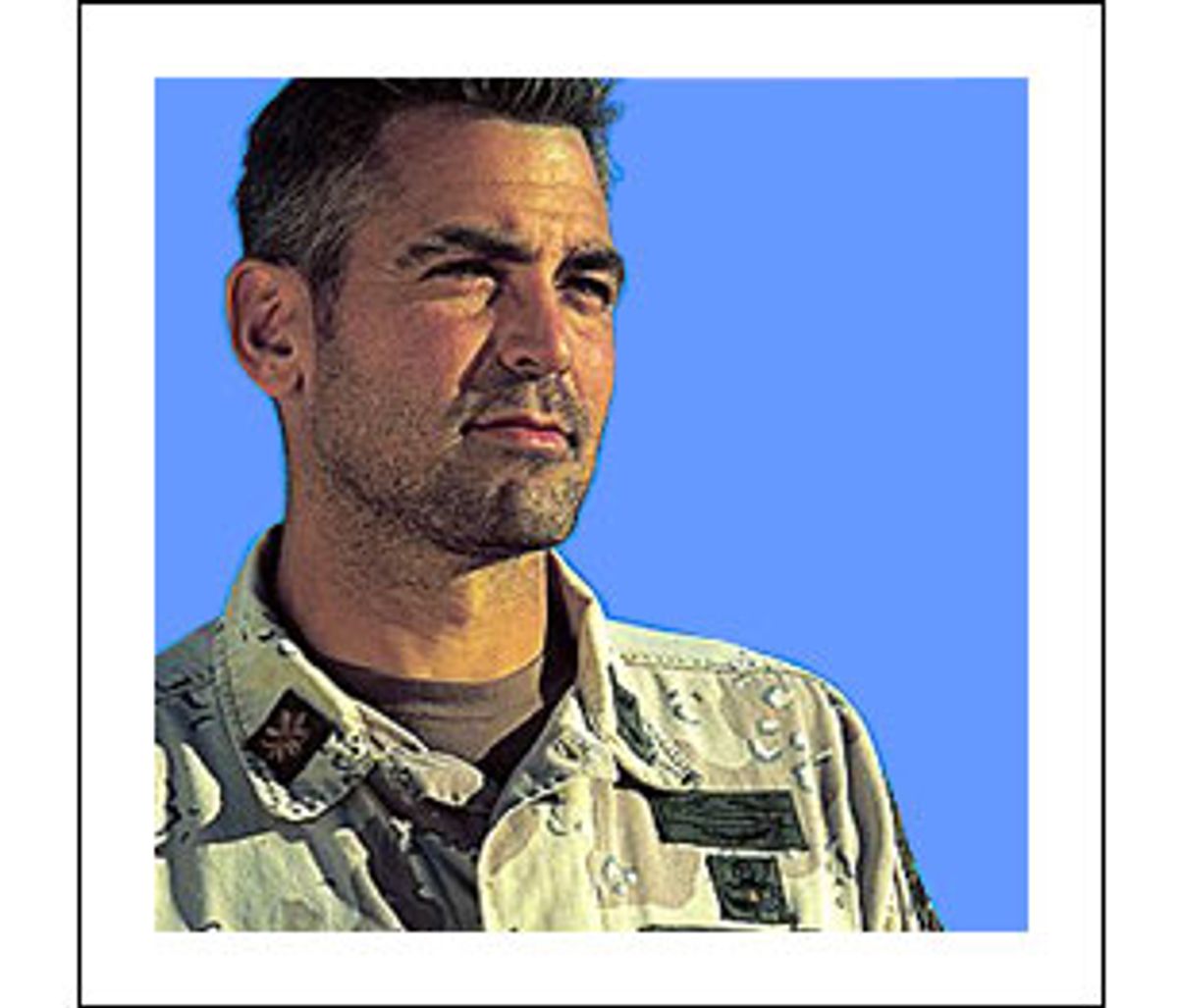 Bursting with energy and style it can barely contain (and sometimes can't), David O. Russell's Desert Storm caper flick "Three Kings" is one of the most exciting Hollywood action films in years, and the best Vietnam movie since "Apocalypse Now." Sure, Russell's film is supposed to be set in Iraq just after the Gulf War has ended, but that's mostly a question of replacing jungle locations with deserts and dressing those Third World extras in some new costumes. In "Three Kings," war is a surreal, almost hallucinatory state, fueled by a classic-rock soundtrack. The U.S. government is a sinister and untrustworthy force, betraying both its own soldiers and the people they're supposedly fighting for. Amid this moral anarchy, America's fighting men -- decent guys who thought they were doing the right thing -- must sort out the racial and social divisions they brought with them from home and depend on each other and their consciences, in the lonely tradition of existential heroes.

This may be a perfectly legitimate template for understanding the Gulf War, or American military history in general, but it's a worldview conditioned and perhaps created by Vietnam. Russell, who directed "Spanking the Monkey" and "Flirting With Disaster," would have been about 13 when the U.S. war in Southeast Asia ended, so his memories of the Vietnam era were probably created in large part by Francis Ford Coppola and Oliver Stone. Army Special Forces officer Archie Gates (George Clooney), with his hipster shades and Hefner-esque demeanor, is a classic soul-searching Yank from a 'Nam film. When we meet Archie, he's looking around at the devastation in the desert and asking rhetorically, "I don't even know what we did here -- can you tell me what we did here?" Maybe Russell is trying to supply an antidote to all the gasbag WWII nostalgia of the last few years by reminding us that America's more recent wars don't have convenient moral excuses and can't be so easily sugarcoated.

Early in "Three Kings," TV journalist Adrianna Cruz (Nora Dunn) tries to get a rowdy party of celebrating GIs to discuss whether the victory over Iraq means that America has now exorcised the "Vietnam syndrome." They're not interested, and probably don't even know what she's talking about. But Russell (who also wrote the screenplay, from a story by John Ridley) is betting that we do. Even the aspects of his filmmaking technique likely to strike younger viewers as totally contemporary -- his careening, ground-level, point-of-view shots; his oversaturated Ektachrome colors and trippy, swirling backgrounds; the sudden slowdowns and speed-ups; the moment when we enter a soldier's internal organs to witness the damage caused by a bullet -- are redolent of the '70s. If there's a lot of John Woo and Quentin Tarantino in Russell's work here, there are also heavy, acid-laden hits of Nicolas Roeg and Ken Russell.

Ultimately, I think "Three Kings" tries to be too many movies at once. It wants to combine the idealism of "Casablanca," the cynicism of "Treasure of the Sierra Madre" and the antiwar outrage of "Full Metal Jacket," all while being a heroic American-guy film and a critique of consumer culture. (As one renegade soldier puts it, the treasures he hopes to loot from Saddam Hussein's secret bunker include "Picasso, Sony, Armani and Rolex.") But even when "Three Kings" loses its focus and shape, its irresistible brio will keep you watching, and wondering what in hell will happen next. Here's a '70s flashback I can get excited about: Russell steps forward here to join other young filmmakers, including the Wachowski brothers ("The Matrix") and Wes Anderson ("Rushmore"), who seem ready to bring some eccentricity and individual vision back to Hollywood.

Two weeks away from retirement and stuck in the middle of the mine-strewn Iraqi desert with the rest of the bored Army, rakish Archie is looking out for No. 1. So when he discovers that a trio of younger soldiers -- Chief (Ice Cube), Troy (Mark Wahlberg) and Vig (Spike Jonze) -- has recovered a mysterious map hidden in an Iraqi POWs nether regions, he sees an entrepreneurial opportunity. Believing that the bunker shown on the map houses not just looted luxury items but millions in gold bullion stolen from the Kuwaiti sheiks, Archie proposes a secret four-man guerrilla raid into Iraqi territory to make the big score. Meanwhile, another soldier (Jamie Kennedy) is told to lead Adrianna -- whom Archie is supposed to chaperone -- on a day-long wild-goose chase.

Well, anybody who's ever seen a movie will realize that this scheme is headed for trouble and that before long Archie and his gang will have to make the choice between greed and honor. When they reach a remote village and find the bunker crammed with Cuisinarts, TVs and cheap stereo equipment -- and, yes, suitcases full of gold bars -- the Iraqi troops offer only token resistance and seem mysteriously eager to surrender the gold and get the intruders out of there. That's because the bunker also contains a torture chamber and several imprisoned dissidents. Our heroes have stumbled into the middle of a civil war, in which the Republican Guard is systematically wiping out anti-Saddam insurgents, who are under the painfully false impression that the Americans will support their rebellion. Once Archie sees a village woman shot dead in front of him, we know what's coming. He may be a Special Forces commando, but as with any Clooney character, his sense of chivalry easily overmatches his instinct for self-preservation.

Clooney's virile, slightly dissolute charm is intact throughout "Three Kings," but I think he's wasted without a woman to slither around (and Adrianna is more a plot device than a character). The real revelation here is Wahlberg, who conclusively proves that his performance in "Boogie Nights" wasn't a fluke. His agile athleticism is no surprise, but Wahlberg also imbues Troy with surprising emotional depth. When he is captured and tortured by a U.S.-trained Iraqi interrogator whose son has been killed in the allied bombing, Troy genuinely seems to be weeping almost as much for the other man's anguish as for his own. This is an exquisitely painful scene, heaped high with ironies, that represents Russell's work at its finest. The torturer addresses Troy as "bro" and "my main man" and wants to talk about Michael Jackson before forcing Troy to drink motor oil, an allegory that would seem forced and clever if it weren't for the awful, tangible reality the two actors bring to the scene.

Jonze, best known as a director of music videos (and of the upcoming feature "Being John Malkovich"), is also impressive as the lunkhead Dallas redneck Vig, who seems genuinely mystified when Chief tells him not to use terms like "dune coon" and "sand nigger" to refer to Arabs. (But, hey, screenwriters -- even these days they don't let you in the Army if you haven't been to high school.) Vig's mostly in the movie as comic relief, but Jonze is eventually able to work around the jokes enough to demonstrate that even this bigoted idiot has some decency at his core. As in his other movie roles, Ice Cube is a solid, stoical presence and something of a cipher. Russell's script doesn't really give Chief enough to do, and in the rapper-turned-actor sweepstakes, Cube's luminous eyes and unflappable demeanor are only good enough for second place behind the big-cat grace of LL Cool J (terrific in this summer's "In Too Deep").

Russell keeps the demented action sequences and peculiar visual jokes coming so fast we don't quite notice that "Three Kings," like almost every Hollywood action movie, finally depends on the notion that American men -- if not their government -- are a morally superior breed. There really is no other reason why a group of soldiers bent on plunder should risk their haul to help a bunch of rebels and refugees whose situation they don't really understand. But maybe that's not worth complaining about; if "Three Kings" is a fantasy in the end, at least it's a juicily enjoyable one. If it lets its characters evade judgment too easily, it makes no apologies for the outrage of warfare, no matter who wages it or why. Its parade of strange images -- a desert convoy of Rolls-Royces and Cadillacs, refugees struggling through a cloud of poison gas, an Iraqi soldier watching the Rodney King beating on TV -- will linger in your memory long after its formulaic plot details have faded.