Singin' in the pain

Life is beautiful for Jakob the liar ... and other heartwarming Hollywood tales of genocide. 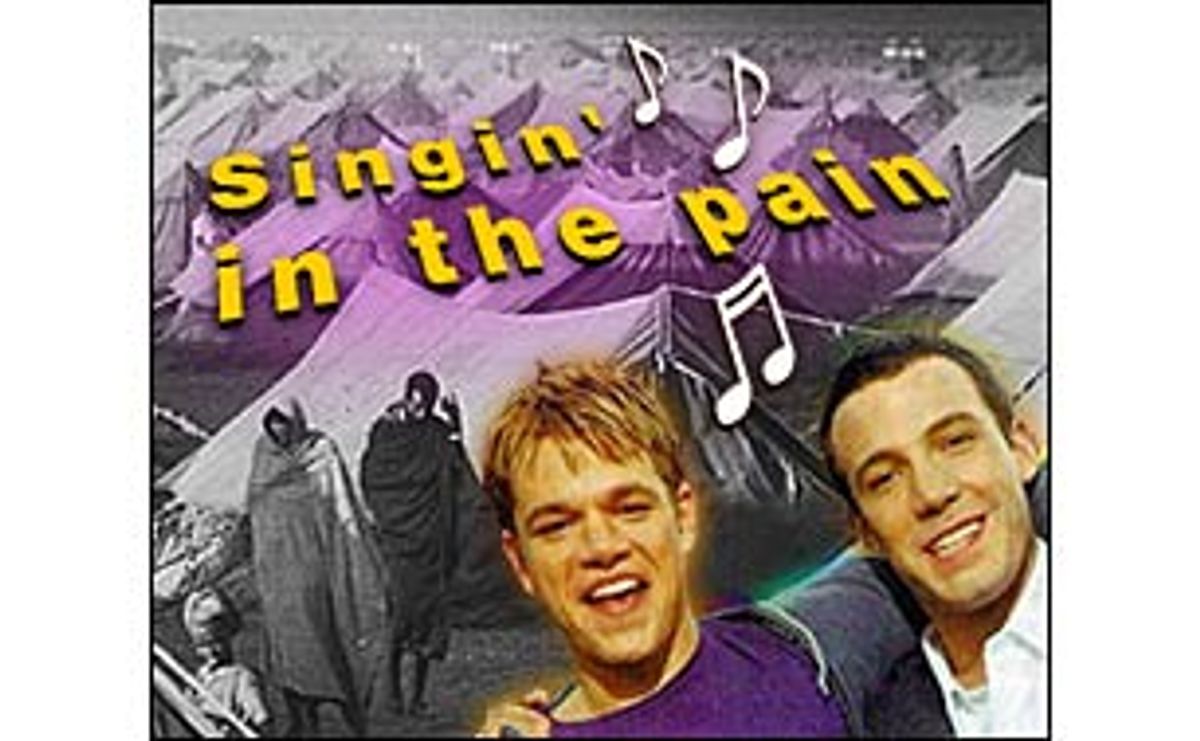 As per your request from our Aug. 14 meeting in the bathroom of your
office, I am sending you titles and short treatments of potential projects,
` la "Life Is Beautiful" and "Jakob the Liar," combining elements of
feel-good nostalgia with, as you so eloquently put it, "a holocausty, but
tasteful edge."

As history holds a myriad of genocidal settings to choose from, I want to
thank you for your suggestion to begin some of the titles with the articles
"A," "An" and "The," as this gave a rather downbeat task the soft-focus
and light touch needed for its timely completion.

Can a 40ish, unemployed Hutu farmer (Martin Lawrence) find health,
happiness and romance disguised as a 40ish Tutsi cattle raiser? Not in
the middle of a Civil War he can't -- especially since he's gone and joined
the losing side! We get every possible variation on the theme of mistaken
tribal identity, then manage to make some lighthearted but well-aimed
observations about war as hell, machete wounds as deep and U.N. forces under
American command as hilariously indifferent. "Tutsi" is the kind of Movie
with a capital M that they used to make in the 1940s, when they weren't
afraid to mix up a little heartfelt tenderness -- and unspeakable carnage
-- right in there with the laughs!

What happens when the gay owner of a glitzy Phnom Penh disco (Pat Morita)
and his squeamish transvestite lover (Nathan Lane) are driven from the city
at gunpoint by communist guerrillas? Its a match made in heaven -- in hell! Butchery and hilarity ensue as the dapper duo find themselves utterly without accessories -- and succor -- in the
killing fields of Cambodia! Talk about being up the proverbial creek without an
atomizer! By turns madcap and blood-soaked, frothy and gruesome, the story
takes a touching turn as the disco owner contrives an elaborate fantasy --
that the baby-faced Khmer Rouge troops are actually door-to-door cosmetics
salesladies -- in order to protect his lover from the terrible truth.

"Three Men and a Baby Doc"

Three swinging Haitian refugees (the Wayans brothers) share a luxurious
Parisian apartment, a mustache and an endless stream of girlfriends in
this lighthearted romp through the bureaucratic maze of political asylum.
Expect all manner of high jinks and bloodshed after the bachelors
unexpectedly find an adorable Caribbean dictator (Jaleel "Urkel" White) on
their doorstep! Cheer as the three clueless hunks wrestle with the responsibilities of caring for the tiny Baby Doc (while trying to avoid being julienned by the Tonton Macoutes, his band of merry murderers). They changed his diapers  he ended their lives!

"An American in Managua"

In Managua to soak in and colonize the local color, Lt. Col. Oliver North
(Jim Carrey), a struggling abstract expressionist under contract with the National Security
Council, scorns the patronage of a rich Contra rebel woman (National
Security Advisor Robert C. McFarlane, later digitally replaced by Vice Admiral John
M. Poindexter) and wins the love of a gamine Sandinista (Winona Ryder) he
meets at a local massage parlor. A delightful musical holiday from the
surrounding mayhem, the original score by George Bushwin features such
favorites as "S'murderous" and "I Got Weapons."

An obsessive-compulsive neat-freak, Slobodan Milosevic (Glenn Close), drives 15,000 Croats from their homes and into a remote farmhouse on the outskirts of London, where 85,000 others are already being held captive. As a rag-tag crew of rogue U.S. envoys and barnyard animals attempt to broker the Dayton peace accord, a good-natured freelance composer (Judge Reinhold) and his supportive wife, Madeleine Albright (Nathan Lane), decide to adopt all 101,000 refugees. Its one great, big, ONE-derful motion picture!

"Everyone says I hate you"

Joe, a neurotic, ex-pat writer in Paris (Woody Allen) contemplates suicide
after getting dumped by his underage French lover, Gishle (the Olsen twins).
Instead, he takes the Concorde to New York in order to burden his best friends, former wife, Steffi (Mia Farrow) and her current husband, Bob (Diane Keaton), with trying to sing him out of it. Once on-board the
aircraft, however, he is told by an earnest flight attendant (Nicolas
Cage) that the plane's pilot, Captain Tibbetts (John Malkovich), plans to
one-up him by dropping a 10-kiloton atomic bomb on Manhattan. Pathologically unable to surrender the limelight even to a large explosive, Joe musters the courage to defuse the bomb -- and single-handedly prevent Doomsday -- despite his crippling myopia and tendency to whine. Luckily, the bomb is equipped with a helpful digital counter, and Joe knows to snip the black wire (not the red!) thanks to all the action movies he saw when he should have been writing.