The late-'90s crisis of masculinity has arrived in pop culture with a vengeance. 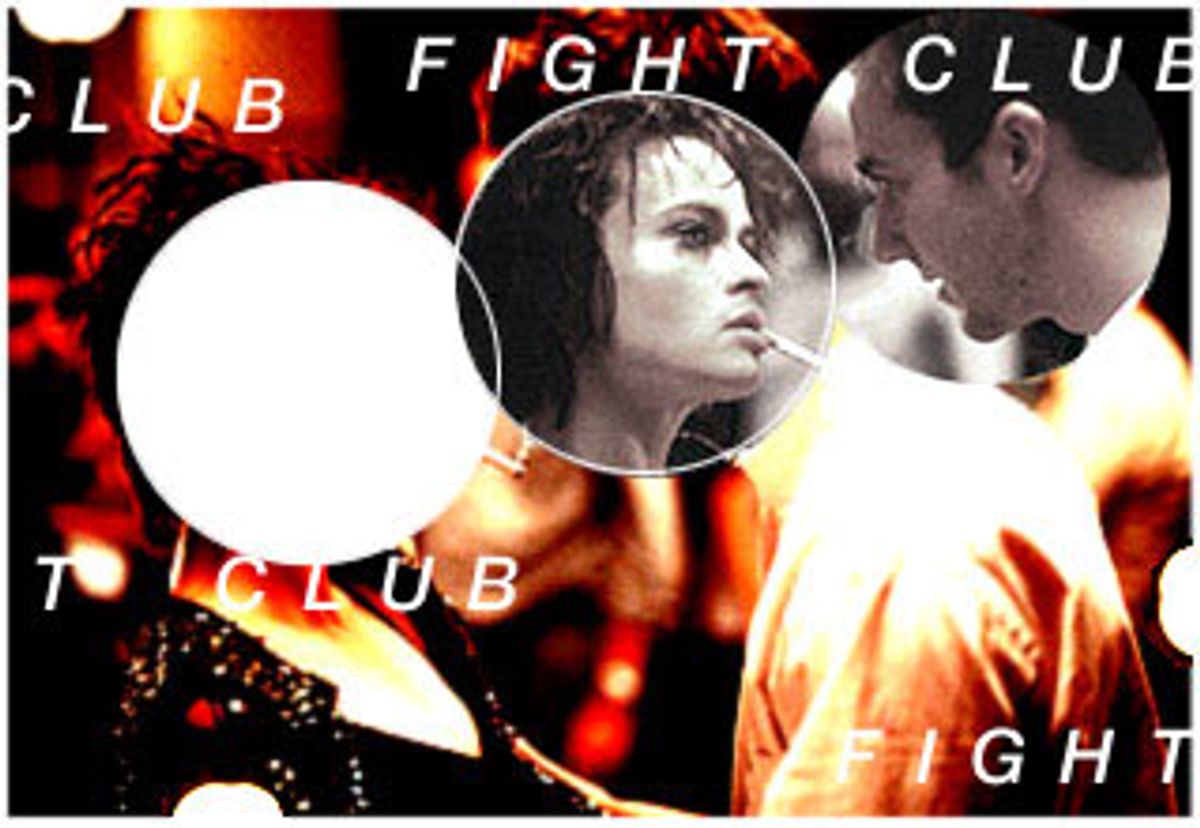 There's a pattern here -- every time Americans get really fat and self-satisfied, we start feeling miserable about ourselves. "Fight Club" is at least the third major Hollywood film of the year to hunt for the hidden meanings beneath our affluent consumer society, after "The Matrix" and "American Beauty." It introduces a memorable turn-of-the-century masculinity guru whom you might call the post-boomer generation's answer to Robert Bly. Tyler Durden (Brad Pitt) is a dissolute, mack-daddy hipster whose gospel includes such maxims as "You are not your job. You are not how much you have in the bank. You are not your khakis." Even the press kit handed out to reviewers of "Fight Club" is heavy with sanctimonious irony -- designed to resemble an upscale clothing and accessories catalog, it purports to offer sunglasses "inspired by styles favored by Pol Pot" and a '70s-style silk shirt "hand crafted in an Indonesian sweatshop by Frida, a single mother of seven whose monthly salary is equivalent to six American dollars."

As this would suggest, there's a lot of imagination and energy in and around "Fight Club," but imagination and energy are often not enough. On balance, this is the dumbest of the entries in Hollywood's anti-consumerist new wave -- there's something more than a little ludicrous about sitting in a theater while Brad Pitt preaches at you about the emptiness of materialism -- but it's still probably worth seven or eight bucks to find out what all the fuss is about. You'll see plenty of Pitt's impressive pecs and biceps, along with the trademark murky photography, decrepit urban landscapes and technical bravado of director David Fincher ("Seven," "The Game"). Maybe the ponderous, talky ideology of "Fight Club" represents Fincher's effort to answer critics who have called him a shallow style-monger. I say he puts on a hell of a show, and both he and we should be happy with that.

You certainly can't say that Fincher or screenwriter Jim Uhls (who adapted Chuck Palahniuk's acclaimed novel) hold back on the film's psychological subtext -- "Fight Club" opens with our nameless narrator (Edward Norton) tied to a chair with Tyler's, uh, gun in his mouth. The narrator then begins to tell us how he and the willfully destructive Tyler wound up in this compromising position. Maybe 1999 is the year of the extended voice-over flashback -- like "American Beauty," "Fight Club" is narrated by a man in extremis, whose true fate is not revealed until the end of the movie. There are other similarities between "American Beauty's" Lester Burnham and the narrator of "Fight Club" -- both are white-collar ass-kissers who rebel against the emasculating conformity of their lives as minor cogs in the great engine of consumption. Throw in journalist Susan Faludi's new book about men, and it looks like the late-'90s crisis of masculinity has arrived in pop culture with a vengeance.

The idea that the human male is an atavistic brute bred for violence and sexual domination, whose true animal nature lies just below a veneer of civilization, is nothing new. Ironically, it has gained credibility in our era partly through the efforts of academic feminists, some of whom have advanced the notion that men's inherent aggression makes them ill-suited for powerful roles in the information economy, and that the coming millennium will be female-driven. As far as I'm concerned, it's probably true that men need to get out of the fluorescent lighting, go on some strenuous hikes and get laid more. But then, so do women. Frankly, for all its strikingly contemporary imagery -- in animated microphotography, we see the insides of the narrator's brain, as well as his waste basket and his refrigerator motor -- "Fight Club" has nothing new to say about any of this. Tyler Durden's wisdom is mostly tossed-off Cliffs Notes Hemingway and Nietzsche maxims about self-destruction and the physical body, flavored with a coy homoerotic wink. "I can't get married -- I'm a 30-year-old boy," the narrator protests to Tyler, who is smoking in the bathtub. "I wonder if another woman is really what we need," Tyler responds.

Drifting through life in an insomniac stupor -- in which, as he remarks, "everything is a copy of a copy" -- the narrator furnishes his condo in upper-Ikea good taste but spends much of his time in planes and airport hotels, where everything comes in a "single serving," including human contact. He's so starved for emotional release he begins attending New Agey support groups for diseases he doesn't have, where it's acceptable to hug strangers and cry at random. His only friend is a man named Bob (played by the beefy singer Meat Loaf) from the testicular cancer group, who has developed "bitch tits" as well as losing his wife, his career and his balls. "Fight Club" is so promiscuous with its ideas, themes and images that it can go from flashes of genuine insight to laborious satire and back again within a few seconds. If the bitter recovery-movement parody often seems mean-spirited and a little outdated, the anguish felt by Bob, the narrator and other characters is no less real for it. You won't soon forget the scene where a woman suffering from cancer begs for a sex partner -- and no one responds.

Hollow-eyed and a little stoop-shouldered, Norton remains an almost detached presence at the center of "Fight Club" even as the imagistic whirl around him gets crazier and crazier. First the narrator meets a fellow support-group tourist named Marla (Helena Bonham Carter), a damaged, chain-smoking hag who looks like a new wave singer, circa 1985. Then he returns from a business trip -- he works for a major carmaker, traveling the country to view the accidents produced by his company's shoddy manufacturing -- to find that his condo has been blown up in a mysterious accident. With nowhere to go, he calls Tyler, a "single-serving" friend he just met on an airplane. Despite dressing like Huggy Bear, Tyler claims he makes and sells an expensive boutique soap. Before long, Tyler, Marla and the narrator are essentially cohabiting in Tyler's massive, dilapidated squat "in the toxic-waste part of town." Tyler and Marla bang like lunatics, while Tyler and the narrator seek access to their inner hooligans by launching an after-hours bare-knuckle boxing society they call Fight Club.

There isn't a lot more I can tell you about the narrator-Tyler-Marla triangle without giving away this tangled and far-too-long movie's secrets, but by this point I was too exhausted to care whether the plot made any sense anyway. Let's just say alert viewers may figure out that the trio's relations are not quite what they seem on the surface. Tyler beats and is beaten, reveals the horrific secret behind his soap, practices a form of "human sacrifice" and delivers lectures on his philosophy of "no fear, no distractions" and on the virtues of hitting bottom. Eventually the Fight Club membership morphs into Tyler's cult-like private army, and the late-night brawls progress into anti-corporate vandalism and even bombing campaigns. Initially fascinated, the narrator finally tries to break away from Tyler's circle, and finds himself running for his life clad only in boxer shorts and a raincoat, after nearly being castrated by pro-Tyler cops.

Like Fincher's highly influential "Seven," "Fight Club" is set in a nameless, unidentifiable American city -- there are some clues suggesting it may be Philadelphia or Wilmington, Del., -- that owes more to film noir, "Blade Runner" and the urban decay of the early '80s than to contemporary reality. Fincher's version of America is a dream world without suburbs, shopping malls, real women (for all Bonham Carter's actorly ability, Marla is a cartoon slut) or more than a handful of dark-skinned men. "Fight Club" is a distinctively dense and often hilarious film, but in the end it's nonsense. Tyler's scheme to liberate American manhood by destroying the credit-card companies -- although it's certainly not a bad idea -- is no more legitimate than the spectacle of the gym-buff Pitt critiquing the Tommy Hilfiger model of masculinity. There's a rich and familiar odor emanating from this movie, but it's not the smell of soap.