"Music of the Heart" 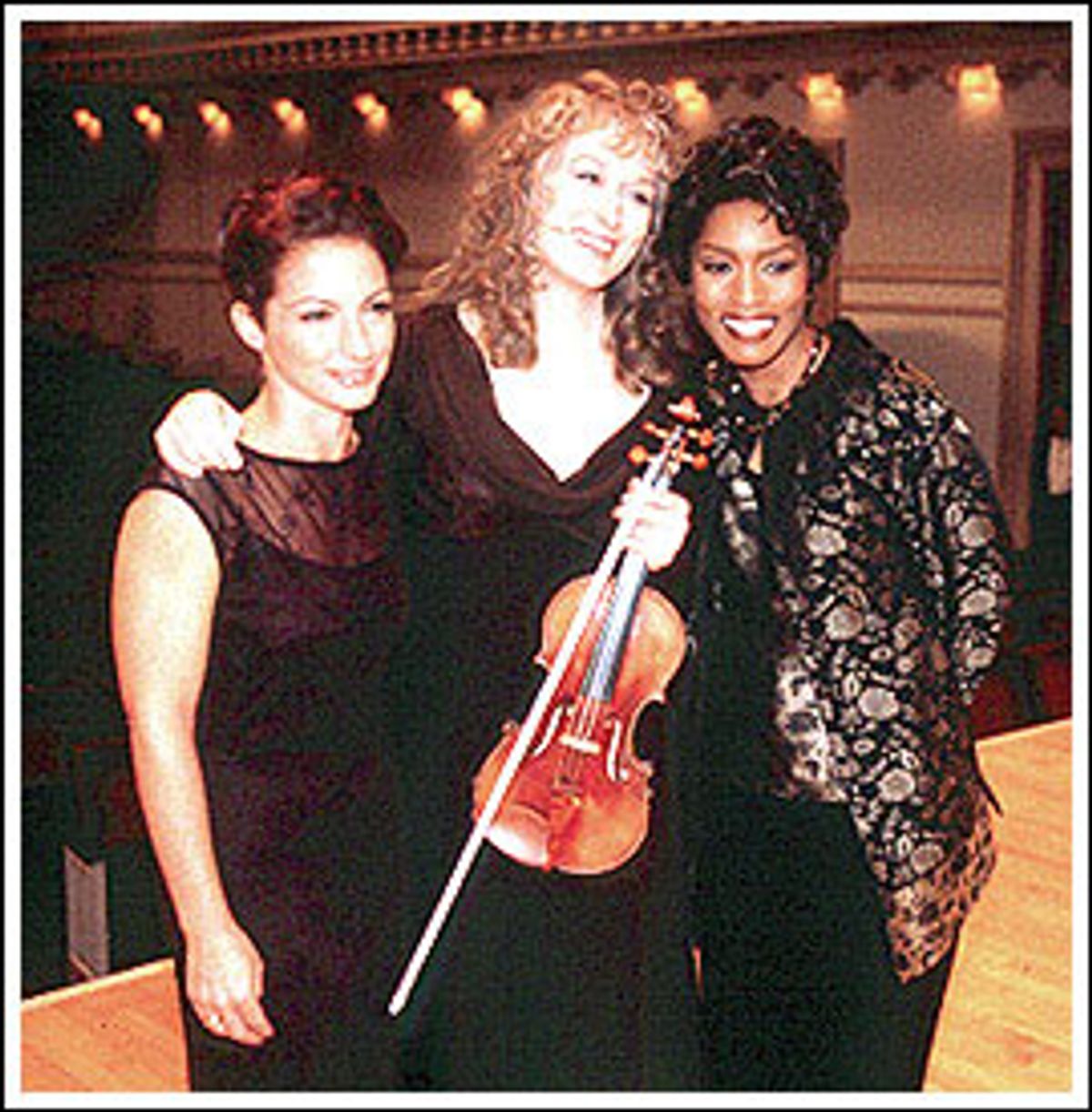 Have our darkest auteurs all gone wuss on us? First "Evil Dead" director Sam Raimi does a romantic melodrama set in the wholesome milieu of baseball. Then David Lynch, of all people, releases a G-rated Disney flick about an old man and his lawnmower. And now, just to make it a perfect hat trick, Wes Craven, the horror director who has more career mutilation-and-murder notches on his belt than possibly any other mainstream filmmaker, has made a sentimental little movie about a spunky inner-city violin teacher. Starring Meryl Streep. For Miramax. With all these touchy-feely vibes going around, it's a wonder Martin Scorsese didn't decide to do "Bringing Out the Dead" as a musical comedy.

No one would dispute an artist's right to spread his creative wings, and in the case of Lynch, at least, a little genre-hopping can prove just the jolt a career needs. But if "The Straight Story" succeeds because it explores new subject matter while retaining its director's unmistakably odd style, Craven's "Music of the Heart" falls flat for its skittish reluctance to bear any resemblance to an actual Wes Craven film.

You'd think that even without carving up the cast, the director could have come up with something that still shimmered with his familiar quirky sense of humor and visual panache. The man who helped define the slasher genre with 1972's "The Last House on the Left," redefined it with "A Nightmare on Elm Street" and then re-redefined it in "Scream" hasn't affected our psyches for all these years by being a mere shlockmeister.

He's imaginative, moody and frequently weird in just the right places. But the guy must be having doubts. He's so anxious to clamp down any vestige of old blood-and-guts Craven that he winds up creating just another utterly bland lump of Hollywood crapola.

"Music of the Heart," based on the 1996 documentary "Small Wonders," tells the true story of Roberta Guaspari, an unassuming Navy wife whose placid world was shaken when her marriage fell apart. Forced to fend for herself and her two young sons for the first time, Guaspari became a violin teacher in an alternative elementary school in East Harlem, helping to launch what eventually became a widely respected youth music program. When, after a decade of teaching hundreds of students, she found that city officials were trying to cut off her funding, the resilient educator fought back -- and won.

It's the sort of triumph-of-the-human-spirit story the film industry cranks out every couple of years -- the fact-based tale of the tough but fair teacher who walks into a decaying, apathetic environment and opens kids up to the wonders of learning. While the principal (Angela Bassett) huffs and puffs in exasperated overwork and an oily, whining colleague sneers at the idea of bringing classical music to the ghetto, Roberta confidently whips her young charges into Bach-loving prodigies. In the space of a few years, the same campus where Exacto knife-wielding second-graders prowl and students are snuffed out in gang drive-bys is also a genteel musical oasis in which little boys whoop "Yessssss!" over the prospect of learning to play a stringed instrument.

Aside from the fact that a recent New York Times article revealed that the real school's reputation as a jungle has been wildly exaggerated, there is a distinct shallowness about the film. When a young mother accuses Roberta of being just another white woman who thinks she can "save" them, it's hard not to notice that the film unwittingly supports the accusation. The noble teacher's efforts culminate in a fund-raiser at Carnegie Hall, with her students playing beside such real-life virtuosos as Isaac Stern and Itzhak Perlman. But what's supposed to be a convincing case for the value of arts education instead looks like a very long public service message for VH1's "Save the Music," complete with diva Gloria Estefan (in her acting debut) as a supporting player.

In the film's central and only remotely plausible role, Meryl Streep turns in yet another admirable performance, right down to her utterly convincing violin playing. But being a real person doesn't make the character of Roberta very interesting to watch. It may be that Guaspari herself isn't, despite her remarkable talent and dedication, a particularly cinematic individual, or it may be that screenwriter Pamela Gray was so hesitant about doing a script based on a living person she felt obliged to make her as inoffensive as possible. Roberta cries over her marriage, dates, fights with her kids and berates her students into acquiring formidable musical stamina, but somehow there's a piece of her soul missing. Her inexhaustible passion for the violin, her necessary natural charisma as a teacher and motivator -- these don't come through. Her vocation is clear, but the meaning of it is never satisfactorily explained, and the possible negative impact her career had on her private life is only lightly touched upon.

The rest of the cast, meanwhile, simply serves to feed lines to Roberta's character, conveniently supplying dialogue to get her to the next scene. It's too bad some of the students couldn't have been more fully developed. Though some of them are clearly clichis -- the tough kid initially ashamed of the violin, the physically disabled girl, the sad-eyed waif whose parents are divorced -- the young actors who portray them at least have a vibrancy and playfulness that brightens up the film's otherwise plodding, we're-trying-to-make-a-serious-point-here tone.

So much of "Music of the Heart" seems terrifically forced, it's surprising that its veteran director could slip up so often into amateurish mistakes. There are continuity errors, boom mikes that float down from the ceiling and a wealth of flat scenes. Craven's attempt to exercise restraint comes at a serious cost to his own style. It's bad enough that the story itself is far from engaging, but it's unforgivable for a talented director to let himself become so suffocated. Craven may have wanted to tell a different kind of story from his usual dark and snarky fare, and that's an admirable goal -- especially for a filmmaker who could easily churn out a Freddy Krueger flick every year and laugh maniacally all the way to the bank. But even serious drama shouldn't be this utterly devoid of joy, this pompously eager to impart its agenda. When Roberta scowls at her students and says, "There's nothing funny here," by God, she's not kidding.

Who would have thought that after all these years of killing off teenagers, Craven's attempt at something more benign would prove to be his most lifeless effort yet?