An actionless thriller about a solved mystery somehow emerges as one of the best films of the year. 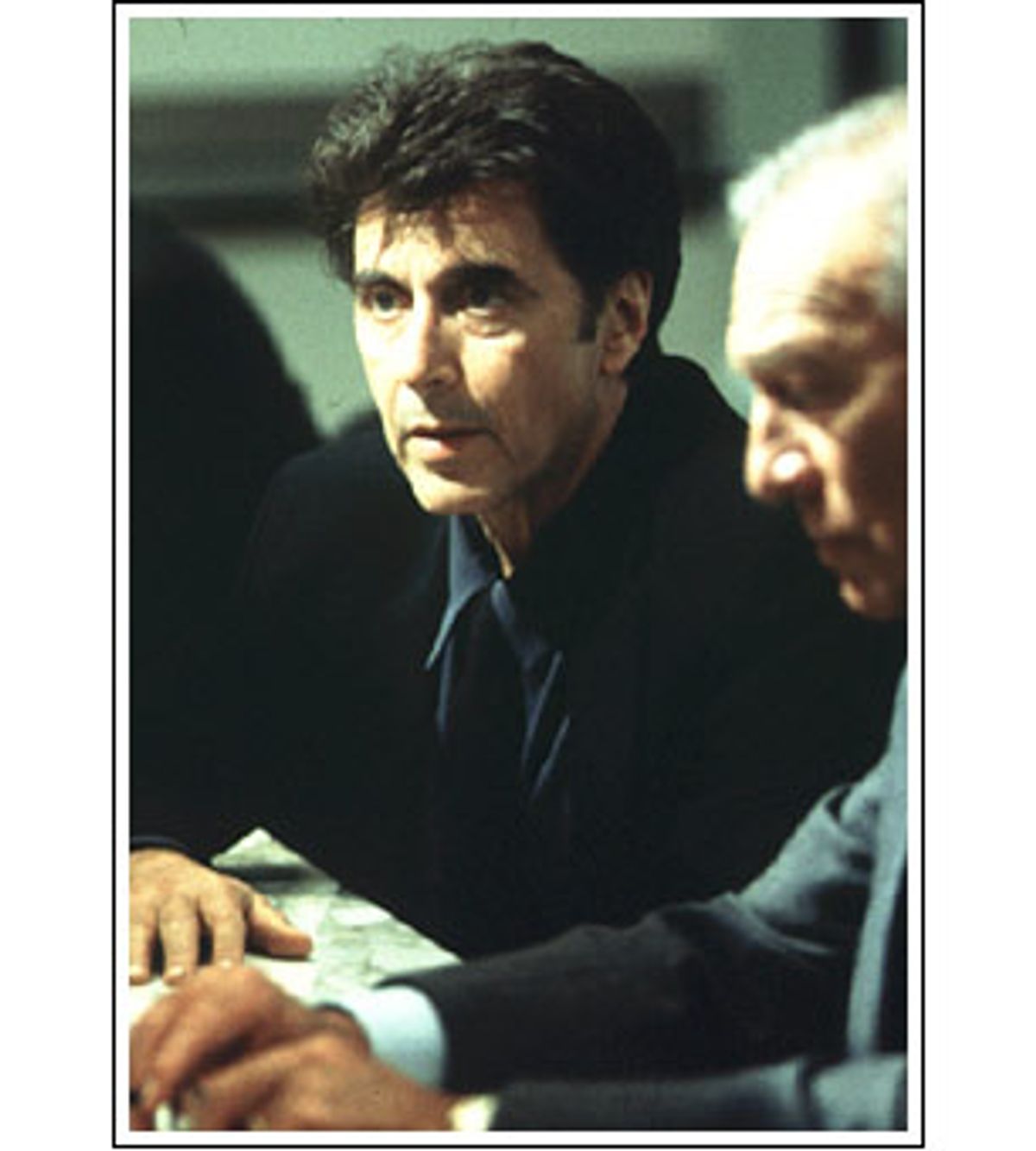 In what's shaping up as a landmark year for American film, "The Insider" nonetheless stands out as an extraordinary accomplishment. It has a marvelous ensemble cast and all the visceral impact and moment-to-moment tension of a fine thriller, together with the distinctive visual style of an art film. But what's most remarkable about "The Insider" is that it appears to build its memorable artifice on a foundation of zero action and painfully pedestrian revelations. At least superficially, this movie tells us that big tobacco companies tell lies and that major media outlets have been corrupted by corporate capitalism. Big fat duh.

In fact, director Michael Mann -- an epochal '80s cultural figure as the creator of "Miami Vice," who has been almost invisible in this decade -- is after something much richer and stranger than the plot of "The Insider" would suggest. And though the film certainly has its flaws, and at more than two and a half hours will test viewers' patience, he mostly achieves it.

Among news junkies and media insiders, "The Insider" has sparked furious gossip over its portrayal of the inner workings of CBS News and "60 Minutes," especially the relationship between host Mike Wallace (played here by Christopher Plummer) and his longtime producer Lowell Bergman (Al Pacino). Although Bergman, who acted as a consultant on the film, is depicted as a martyr for the cause of journalistic integrity and Wallace is shown caving in to corporate suits at a key moment, the presentation of their characters and the conflict between them is anything but simplistic.

Like most Pacino characters, Bergman -- a former '60s radical -- is something of a cocksure blusterer, loudly declaiming about justice and honor to cover his own insecurities. Wallace, in Plummer's magnificent portrayal, is an aging patrician with his eyes on his legacy. If he loses his nerve in the internecine conflict over whether to run an explosive interview with tobacco industry whistle-blower Jeffrey Wigand (Russell Crowe), it's because he's reluctant to be remembered as the reporter who destroyed his own network.

Despite Pacino's always-enjoyable scenery chewing, Mann and cinematographer Dante Spinotti are more interested in Crowe, the remarkable Australian actor best known previously for his role as Bud White in "L.A. Confidential." There's no way for us to know how much Mann and co-writer Eric Roth's portrait of Wigand -- a research scientist with a troubled personal history who had just been fired by the tobacco giant Brown & Williamson when Bergman discovered him -- is based on fact and how much on fancy. Either way, Crowe's carefully nuanced, almost opaque performance is the visual and thematic centerpiece of "The Insider." We frequently see Wigand in close-ups so extreme we can make out every mole and pore in his face, yet the results of this scrutiny are ambiguous. At the movie's end, we know little more about Wigand and his motives for revealing the secret techniques that his company used to manipulate nicotine delivery in cigarettes than we did at the beginning.

Mann structures "The Insider" around a masterful series of dreamlike tableaus involving Wigand alone against landscapes suffused with improbable, fluorescent colors. We see him practicing his golf swing at an ominously empty driving range at night, driving past the rows of white headstones at a military cemetery, sitting alone in a hotel room imagining his daughters playing in the backyard. On the most obvious level, these scenes express the character's extreme isolation; he has thrown away his livelihood and lost his marriage, has been bombarded with legal gag orders and anonymous death threats and may be abandoned by the network that coaxed him to talk in the first place. But they also establish "The Insider" as a study in American light and space, a primarily visual ode to the essential strangeness and loneliness of American life.

About halfway through the film, we see Wigand on his first day at his new job teaching high school chemistry. For the first time, this restrained, inarticulate guy, who tells Bergman he went to work for big tobacco so he could earn enough money to please his Southern belle wife (Diane Venora), seems carefree and animated. Wigand tells his students that chemistry, to him, is a form of magic. This is not only an allegorical key to the character of this self-described "man of science" but a key to Mann's portrayal of him, which is partly chemical and partly alchemical, a mix of scientific scrutiny and sheer sorcery. Mann's approach here reminds me of the formulation recently expressed by writer and director Paul Schrader -- some filmmakers understand character as an instrument of elucidation, while others (Schrader meant himself and Martin Scorsese) see it as an instrument of mystery.

Certainly those in the mood for hard-hitting docudrama about investigative journalism and its ethical tradeoffs, combining elements of "All the President's Men" and "The Year of Living Dangerously," will also get their fix from "The Insider." As usual, anyone who actually does work in journalism may be amused to see the laborious news-gathering business made to look so glamorous. Most reporters spend more time leaving never-to-be-returned telephone messages or watching pay-per-view movies in the Ramada Inn than careening through Beirut streets en route to visit a Hezbollah sheik, as Bergman does in the exciting opening scene here. Back in the U.S. after convincing the sheik to go on the air with Wallace, Bergman begins researching a story about smoking and fire safety, which half-accidentally leads him to Wigand.

It's 1995, and the heads of the seven major tobacco companies -- "the Seven Dwarves," as Wigand dubs them -- have recently made their infamous appearance on Capitol Hill to swear that nicotine is not an addictive drug. When it becomes apparent that Wigand has the knowledge and the desire to demonstrate that this was a bald-faced lie, but that he signed a confidentiality agreement with Brown & Williamson, the wheels are set in motion. Spinotti's point-of-view camera trails after Bergman as he ricochets from New York to Kentucky to Mississippi, hoping to get Wigand subpoenaed for a civil trial in order to force his testimony onto the public record. While he battles Brown & Williamson's efforts to intimidate Wigand into silence, Bergman doesn't realize that management back at Black Rock -- the CBS corporate headquarters on West 52nd Street -- is starting to wish the whole story would just go away.

Mann's fine supporting cast includes Philip Baker Hall as "60 Minutes" executive producer Don Hewitt, Lindsay Crouse as Bergman's wife, Colm Feore as a Mississippi attorney trying to take down big tobacco and Gina Gershon as the icy corporate witch who lowers the boom on Bergman and Wallace. (As good an actor as Michael Gambon is, he can't do American accents, and his role here as Brown & Williamson's CEO is disastrous.) Gershon is the only woman in the movie who plays any kind of active role in the story, and hers is both tiny and evil. I'm not suggesting that Mann had some obligation to practice affirmative-action casting, especially when telling a story based on actual events, but "The Insider" inadvertently makes clear just how white and male the upper echelons of business and media remain in this country.

We live in a golden age of film technique, but most directors just throw it all up there on the screen and hope it hangs together. Whatever Mann has been doing since making "Heat" in 1995, I wish more filmmakers would do it. "The Insider" isn't just beautiful to watch on an epic scale, it expertly builds tension by integrating an electronic score by Pieter Bourke and Lisa Gerrard and the terrific editing work of William Goldenburg, David Rosenbloom and Paul Rubell. Still, what you'll remember about this movie years from now isn't its whirling imagery or the media buzz but the strange, sad stillness of Crowe as Wigand at its center. I came away believing that the film's title is, in the end, ironic. The Jeffrey Wigand we see here is an ordinary upper-middle-class American who makes an extraordinary decision for reasons he doesn't quite understand and whose consequences he can't imagine. For all his insider information, he remains beyond Mann's grasp or ours, unknowable, an outsider.