"Sleeping With Extra-Terrestrials" by Wendy Kaminer

American boobs will believe practically anything. But is this news? 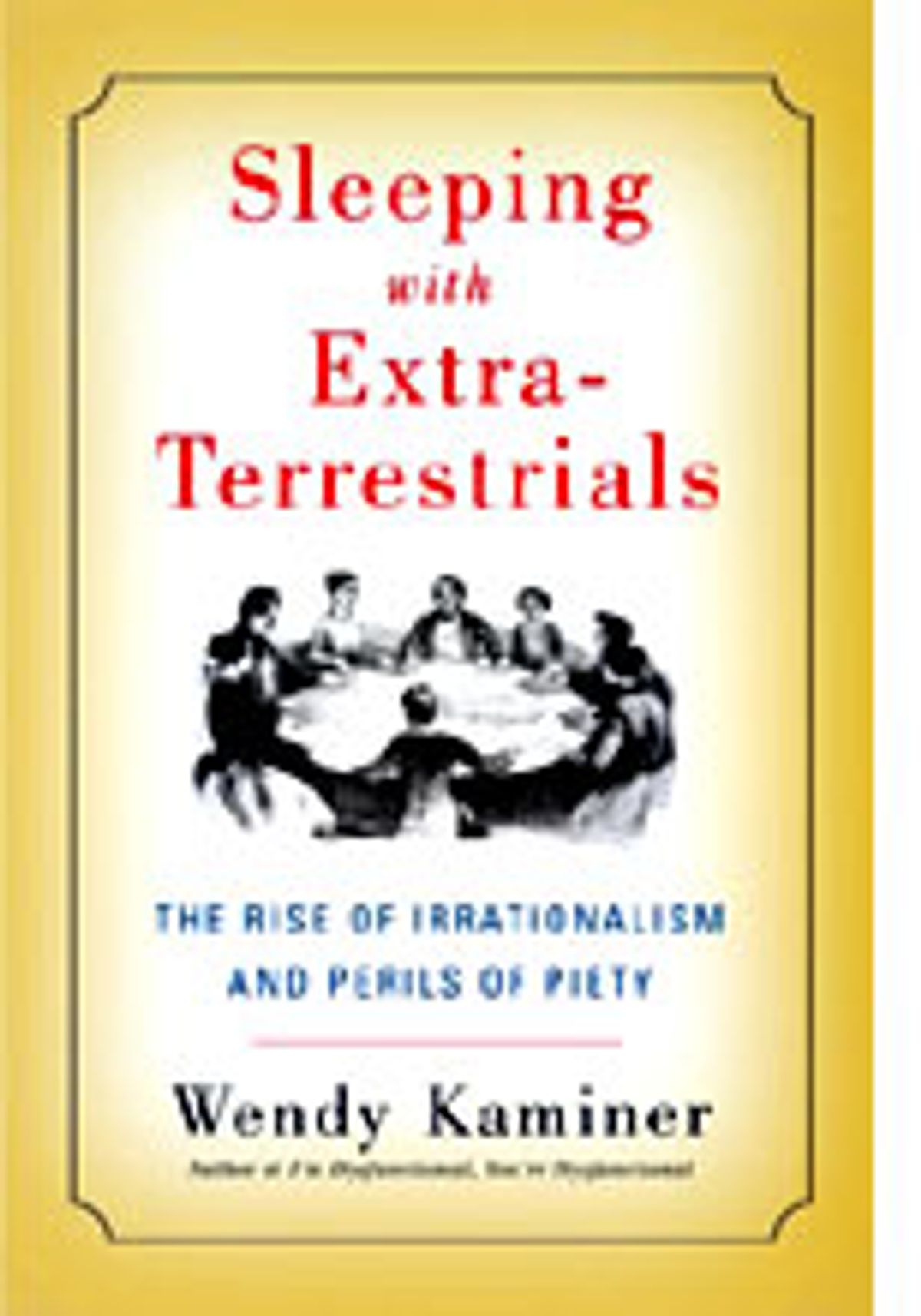 Wendy Kaminer sees America returning to God, and she doesn't like it. What she objects to (or says she objects to), though, isn't the pre-millennial resurgence of religious faith so much as its pernicious effects on democracy. For her, the public sphere has been hopelessly contaminated with piety (much of it spurious and hypocritical), woolly-minded New Age spirituality, superstition about angels and aliens and other dangerous forms of irrationality. This promiscuous outpouring of belief, she fears, is corrupting our ability to form rational judgments -- never an easy task under the best of circumstances -- and compromising the Enlightenment basis of our republic.

A fellow at Radcliffe College best known for her scathing analysis of the recovery movement, "I'm Dysfunctional, You're Dysfunctional," Kaminer can think and write with bracing clarity. And a great deal of what she has to say in her new collection of essays, "Sleeping With Extra-Terrestrials," badly needs saying. With virtuecrats of the right, center and even left exhorting us into the churches and synagogues and sinful politicians indulging in spectacles of prayer and penitence, it's a positive relief to encounter a public intellectual with the courage to wonder whether all this old-time religion is really good for us. Kaminer has assumed the lonely role of skeptic in a nation of believers; she frequently ventures onto daytime TV and talk radio to be pilloried as a soulless heathen.

Actually, though, her personal attitude toward religion is complicated. She describes herself as an agnostic rather than an atheist. Sometimes she seems envious of the faithful, at other times derisive. As she struggles to define her own beliefs, she retreats into negatives and double negatives: "I'm not oblivious to the comfort that supernaturalism may provide or unimpressed by the powerful human impulse to believe; nor am I utterly secure in my disbelief."

Kaminer observes that the '90s revival of faith is so sectarian in character that it actually threatens true religious freedom. (In Bible Belt school districts where prayer has been introduced in defiance of the courts, Jewish children have been persecuted and harassed.) And she argues that the equation of religion with virtue has driven political debate in illogical directions on a host of issues. The immeasurably destructive war on drugs she regards as a "faith-based antivice crusade." The 1996 welfare-reform package actually began channeling federal funds directly to houses of worship, a breach of the church-state firewall so dramatic it even troubled some religious leaders; but as Kaminer writes, these concerns were drowned out by a consensus that only churches and synagogues could "provide welfare recipients with spiritual healing, which almost everyone, left and right, assumed that they needed."

Somewhat immodestly, Kaminer implicitly compares herself to H.L. Mencken, Mark Twain and other acerbic critics of the American tendency toward dopey credulity. And as long as she stays on the topic of religion and the idiocies it introduces into public life -- fending off the communitarian left on one hand and the neo-Victorian right on the other -- the thrusts and parries of her reasoning remain worthy of these forebears. But when she turns her attention to New Age spirituality, and then to popular feminism, pseudo-science, therapy and the Internet, her writing becomes increasingly shapeless and uncentered.

Too often she attacks easy and oft-punctured targets, from past-life therapists and recovered-memory experts to angel channelers and UFO abductees. But the fact that Americans believe all kinds of improbable and unprovable things isn't exactly news. (Did Kaminer's block just get wired for cable?) Our country was first settled by fanatics and has always incubated eccentric varieties of belief -- there was never a golden age of American rationalism.

Kaminer is right, of course, that a lot of people are ready to swallow any far-fetched notion that makes the painful and lonely business of living and dying more tolerable. But in an era when the secular authorities of science and government have so often proved corrupt, almost everyone feels the need to look elsewhere, at least sometimes, for absolute verities. Kaminer's account of the culture of credulity may be carefully argued and intellectually nuanced, but it has the unimaginative, unsympathetic tone of an indictment.

Perhaps I'm reacting to Kaminer's bloodless style rather than to what she's saying, and thus exposing myself as a member of the cult of "the authenticity of subjective experience," to use her phrase. But then I don't have any other kinds of experience to draw on. To my mind, Kaminer misses the terrifying and marvelous disconnect at work in contemporary society -- the capacity of Information Age human beings to believe any number of mutually contradictory things at once. Maybe it's because Kaminer is completely immune to the fluid, almost erotic allure of religious or magical thinking that she has no real feeling for it. But absent such fundamental sympathy, her book feels unhappily reminiscent of a civics lecture: For all the excellent points it makes, it's earnest, self-righteous and easy to ignore.