Arnold's back, with a Jesus Christ pose. 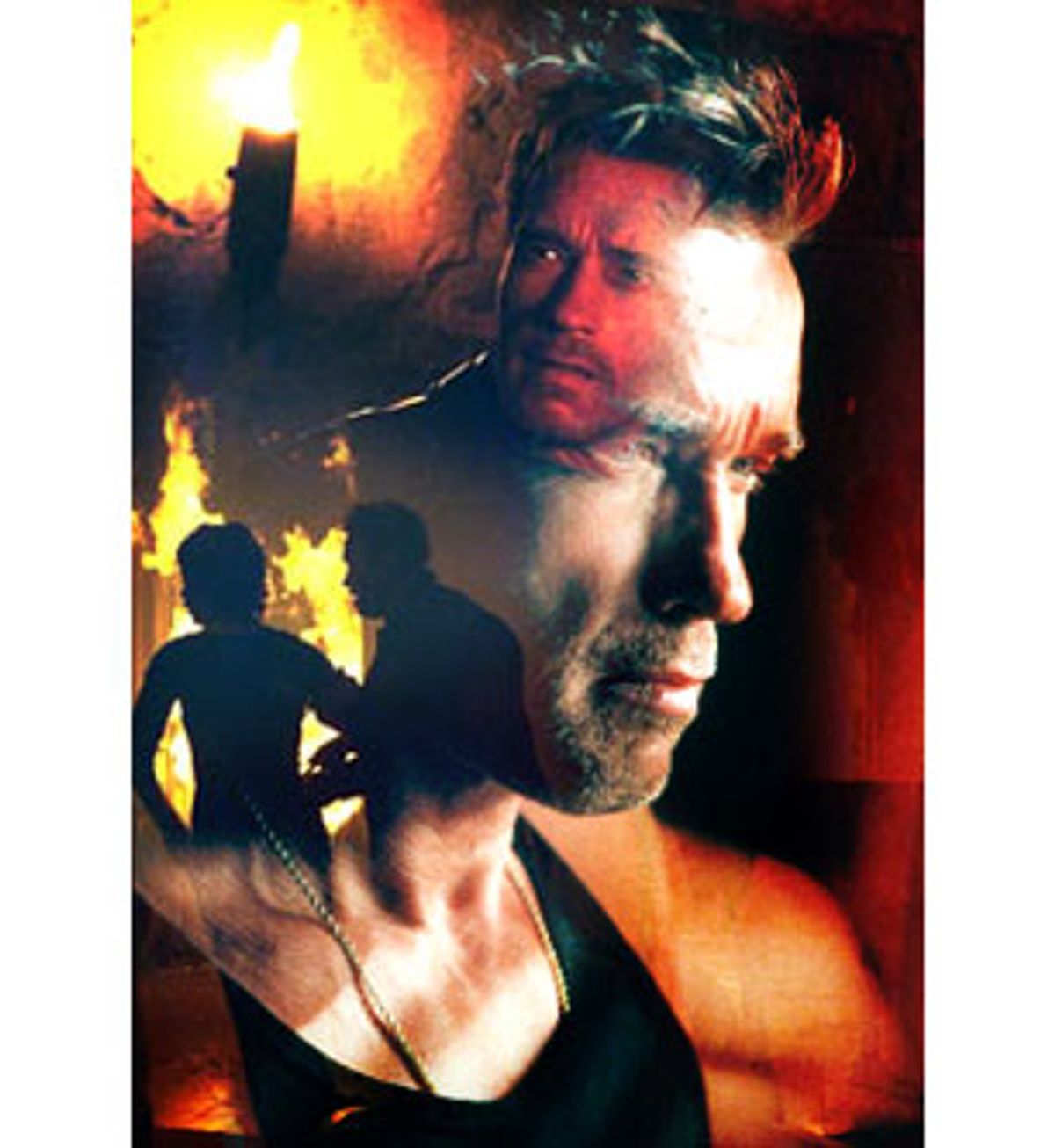 Now I'm confused. Can firearms hurt Satan -- or "The Man," as he's identified in the credits to "End of Days" -- or not? Sometimes the fallen angel (played here with prodigiously enjoyable brio by Gabriel Byrne) can sort of suck up bullets like candy corn; sometimes you shoot him in the head and he comes lurching and slobbering after you with his brains leaking out, like an extra from a zombie movie. Perhaps I'm being too literal-minded, or my understanding of quantum metaphysics is just too limited. After all, as a beefy priest (Rod Steiger) with many years of experience in battling the Horned One explains to Jericho Cane (Arnold Schwarzenegger), "There are forces at work here you couldn't possibly comprehend!"

Enough pedantry -- "End of Days" is Arnold's big return to the mindless action-adventure genre where he's most comfortable, and for the most part it's a blast. Commanding huge armies of stunt people, digital-graphics artists and model makers, director Peter Hyams hurls his kazillion-dollar budget at us in one breathtaking action sequence after another. We see churches, subway trains and fancy Manhattan apartments destroyed; we see the obligatory eye-popping helicopter-daredevil chase scene; we see two crucifixions, an apple crawling with humanoid worms and a baby nursed on serpent's blood.

Through it all struts Byrne, in one of the most delicious movie-villain roles of recent years. He's a smirking Wall Street Lucifer who pisses gasoline and blows cigarette smoke into a hospital patient's oxygen tent. God, as he explains to Jericho, is just a weak CEO with a good P.R. department: "Something good happens, it's his will. Something bad happens, he moves in mysterious ways."

But all is not well in "End of Days," for all its votive-candle flame-throwers, dagger-wielding commando priests and cross-eyed albino demons. This is clearly an attempt to take Schwarzenegger and his audience back to his glory days of the late '80s and early '90s. In fact, you might think of "End of Days" as "Terminator 3" under another name -- Jericho, after all, is a freelance crusader trying to protect a young woman from the forces of apocalyptic evil.

But the star himself, affecting George Michael bristle and a world-weary demeanor, is a curiously pallid presence despite his still-massive physique. Maybe Schwarzenegger seems diminished in a pop-culture era increasingly dominated by video gaming and professional wrestling; the qualities of improbable bigness and trashiness that made us love him have become devalued currency, available to any jerk with cable TV and a PlayStation.

Furthermore, "End of Days" manages to blow most of its accumulated audience goodwill in a ludicrously extended pseudo-spiritual climax that should simultaneously offend believers and thoroughly irritate non-Christians and other heathens. Horror fans of all faiths are used to the convention that the Roman Catholic hierarchy is best prepared to combat Satan and all his pomps. But Hyams and screenwriter Andrew W. Marlowe go much deeper and dumber than that, grinding the Christian symbolism into our faces like a drunk putting out a cigarette on a barroom floor. Compared to Jericho Cane's role in "End of Days" (check out his initials), the Christ allegory surrounding Keanu Reeves in "The Matrix" is a masterpiece of subtlety and suggestion.

When we first meet Jericho, he's supposed to be contemplating suicide until his wisecracking buddy Chicago (Kevin Pollak) shows up to collect him for their high-powered security job guarding a mysterious investment banker. We already know this is Byrne, who's been inhabited by a none-too-mysterious entity who emerged from the New York sewers in a recent explosion. (With all the money these filmmakers had to spend, they could have done better than an invisible video-shimmer creature straight out of Arnold's 1987 "Predator.")

It's three days before New Year's Eve, 1999, and the Evil One is in the Big Apple to claim his appointed bride, a mousy 20-year-old named Christine (Robin Tunney). Christine has lived in some deluxe Satanic protective-custody arrangement since her birth, to protect her from the Vatican's agents, some of whom want to kill her even though the Pope has decreed she be spared. Got all that?

When a renegade priest named Thomas Aquinas tries to kill Byrne and starts babbling at Jericho about how the thousand years have ended and the end of days is upon us -- despite the fact that he has no tongue! -- our hero becomes mildly curious. He doesn't ask about when the thousand years supposedly started, or mention that, well, even if we buy the whole premise, it's been 2,000 years, hasn't it? When told by Steiger's priest that the devil must get his groove on with Christine in the hour before midnight on New Year's Eve in order to bring about the Apocalypse, Jericho does ask, "Is that Eastern time?"

From that point on, Jericho and Christine tear through a series of dripping tunnels, back alleys and lavishly appointed churches, with the well-tailored, bedroom-eyed Byrne not far behind. "End of Days" suffers from what scholars of Milton's "Paradise Lost" refer to as the Satan problem: Byrne is such a seductive and charismatic Antichrist (not to mention a consummately skillful actor) that you wonder why Christine spends even two minutes with the ponderous, mush-mouthed Jericho.

After stopping off for a quick three-way with one worshipper's wife and daughter, the lord of darkness finally corners Jericho in what you might call this film's "last temptation" scene. Like all allegedly tormented action heroes, Jericho has a dead wife and child, and his Satanic majesty is of course willing to bring them back -- for a price. "Where was God?" Byrne asks. "He could have stopped it. Instead he fucked you and made you feel guilty. Me, I don't do guilt." What about the end of life on Earth as we know it, Jericho wonders? "Think of it," the Man purrs, "as new management."

After that high point -- really the only scene where Byrne and Schwarzenegger get to play off each other -- "End of Days" slides slowly downhill toward its turgid conclusion. Like many movies set in New York these days, it struggles to avoid the banal, corporatized landscape of contemporary Manhattan. Hyams and company scrounge far and wide for locations -- some of them actually in Los Angeles -- that convey the right sense of '80s or even '70s menace (the design of the subway set is at least two decades out of date). Few New Yorkers, however, will be surprised to learn that the entire NYPD is working in Satan's service; only legal issues, one imagines, prevented exposing Rudy Giuliani as a hoof-licking sycophant of the Man-Goat. (That comb-over is not the Lord's work!)

As the only actioner in the holiday marketplace that attempts to engage millennial issues -- however dimly and obviously -- "End of Days" should draw huge crowds for at least a couple of weeks. But there's something almost melancholy about watching this fading superstar gamely lumber through his stunts for an aging Hollywood hack director making his 17th feature (not one of them worth a second look). I'm not suggesting that this kind of movie making will die out anytime soon, but this has been the year when mainstream American film began to graduate from the dumb-ass blockbuster model. "End of Days" keeps asking whether faith or force will save the human race, before hedging its bets and insisting on both. Neither will be enough to save relics like Hyams and Schwarzenegger from their long, affluent drift into irrelevance.