Al Pacino and Cameron Diaz make all the right moves, but Oliver Stone's playbook is running out of juice. 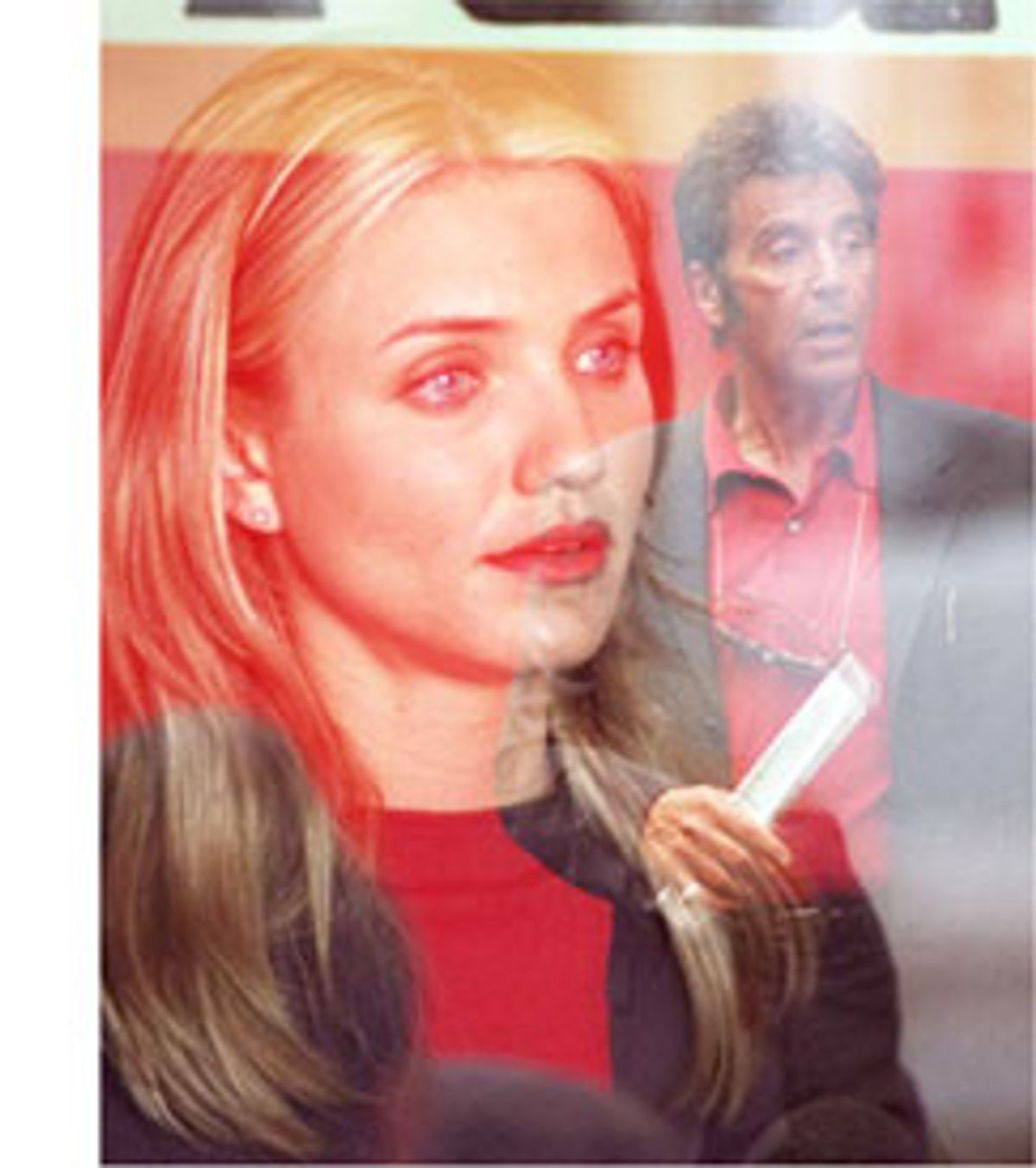 Oliver Stone is the auteur of dick waving. Sure, there are other directors who possess a certain masculine something, but Stone, well, he's in a preening, chest-thumping, territory-marking class of his own. He's already set his stories in Brut-scented milieus of war, Wall Street and the White House, but now he's getting really macho. In "Any Given Sunday," his ode to football, even the women have cojones to spare.

Football isn't just a game to Stone, it's a noble battle, a pure expression of human nature at its most brutal and brotherly. On any given Sunday, his characters explain solemnly and repeatedly, you can win or you can lose, but what matters is that you do both like a man. "Any Given Sunday" uses the game and its broad spectrum of on- and off-field players to dig its cleats into a number of big-ticket issues like ageism, racism and sexism, but what the movie's mostly about is what it means to be a man, especially in a world where the rules are changing fast.

At the start of the story, it's a bad time for testosterone. The black-clad, predatory Miami Sharks are in the middle of a shitty game in a shitty season. Their haggard head coach Tony D'Amato (Al Pacino) is in the hot seat, and two Sharks quarterbacks have been injured in one quarter. As bodies crunch with sickening thuds into sloppy piles of limbs, the glory of sport seems a million miles away.

But then the film suddenly turns into an old Ruby Keeler musical, as the injuries afford plucky third-string quarterback Willie Beaman (Jamie Foxx) a chance to strut his stuff. Before long, the Sharks are bouncing back. But not everyone in the organization is better for the success. Willie promptly dumps his loyal girlfriend and turns into a part-time shirtless rap star and full-time prick. His colleagues audibly -- and sometimes physically -- resent his glory-hogging.

The team's doctors (James Woods and Matthew Modine) wrestle their ethics, dispensing powerhouse pharmaceuticals and sending banged-up men out on the field to sustain more damage. And Tony, a boozy, haggard relic of a man, can't find his way into the good graces of team owner Christina Pagniacci (Cameron Diaz). Christina, an icy Cornell MBA who inherited the franchise from her father, shrieks to Tony that he's old and has lost his intensity. Tony counters by implying to Christina that she's not the man her dad was. Basically, they're both assholes. But they're assholes who love the team -- dammit!

As the film moves lurches and grunts to its inevitable climax -- the big playoff game -- it doesn't so much build itself up as it wears its viewers down. Stone is an undeniably stylish director, and his talent for conveying intense emotion is well put to use here. There are moments of "Any Given Sunday" in which the physical pain and thumbscrew pressure of being an athlete are beautifully, sadly played. But more often Stone's in-your-face technique is as exhausting as his steroid-enhanced players.

Most of the story takes play on the field, and despite Stone's use of close-ups, hand-held camera work and non-stop music, his techniques still seem clichi and rote after they've been piled on for a few hours. Besides, how many times have we already seen a ball floating through the air in slo-mo or stamped our feet to "We Will Rock You?"

Even when the movie moves away from the game and into the bars and bedrooms, Stone keeps the grrrs and eeaagghs coming. It's as if he can't bear to be away from the game for even a minute. Interior, dialogue-driven scenes are punctuated with finger-pointing and flying spittle and flashbacks to ass-kicking scrimmage and -- no kidding -- the chariot races from "Ben Hur." Co-writer Stone seems to quaintly believe in the nobility and romance of the sport of shoulder pads, and that's where he wants our hearts and attention to be. He has characters reverently refer to players as "gladiators and warriors," and even gives his alternate NFL teams mythic names like the Crusaders and the Knights. In case that's too subtle for you, he trots out he-man among men himself Charlton Heston in a minor role.

Stone's flair for assembling appropriately explosive casts is still very much in evidence, and the ensemble here is an impressive one. Pacino is thoroughly convincing as the beaten down dinosaur, looking as weathered and tanned as an old pigskin. Even Cameron Diaz does her best to bring credible vulnerability to the castrating bitch part.

But the best thing about "Any Given Sunday" is Jamie Foxx, who imparts a much appreciated sense of humor into the proceedings. He's a cocky stud whose trademark move is anxiety-induced vomiting, the son of a church-going mama high on pussy and product endorsements. He also does a mean Pacino imitation.

Even the wattage of the cast can't save "Any Given Sunday" from its own tedium, however. It's super revved up, high-intensity tedium all right, but tedium nonetheless. And when a sportscaster complains that with all the plays in the book, Tony keeps going back to the same ones again and again, you can't help thinking the same is true with Stone.