What could be worse than a humiliating death? Try getting famous for it. 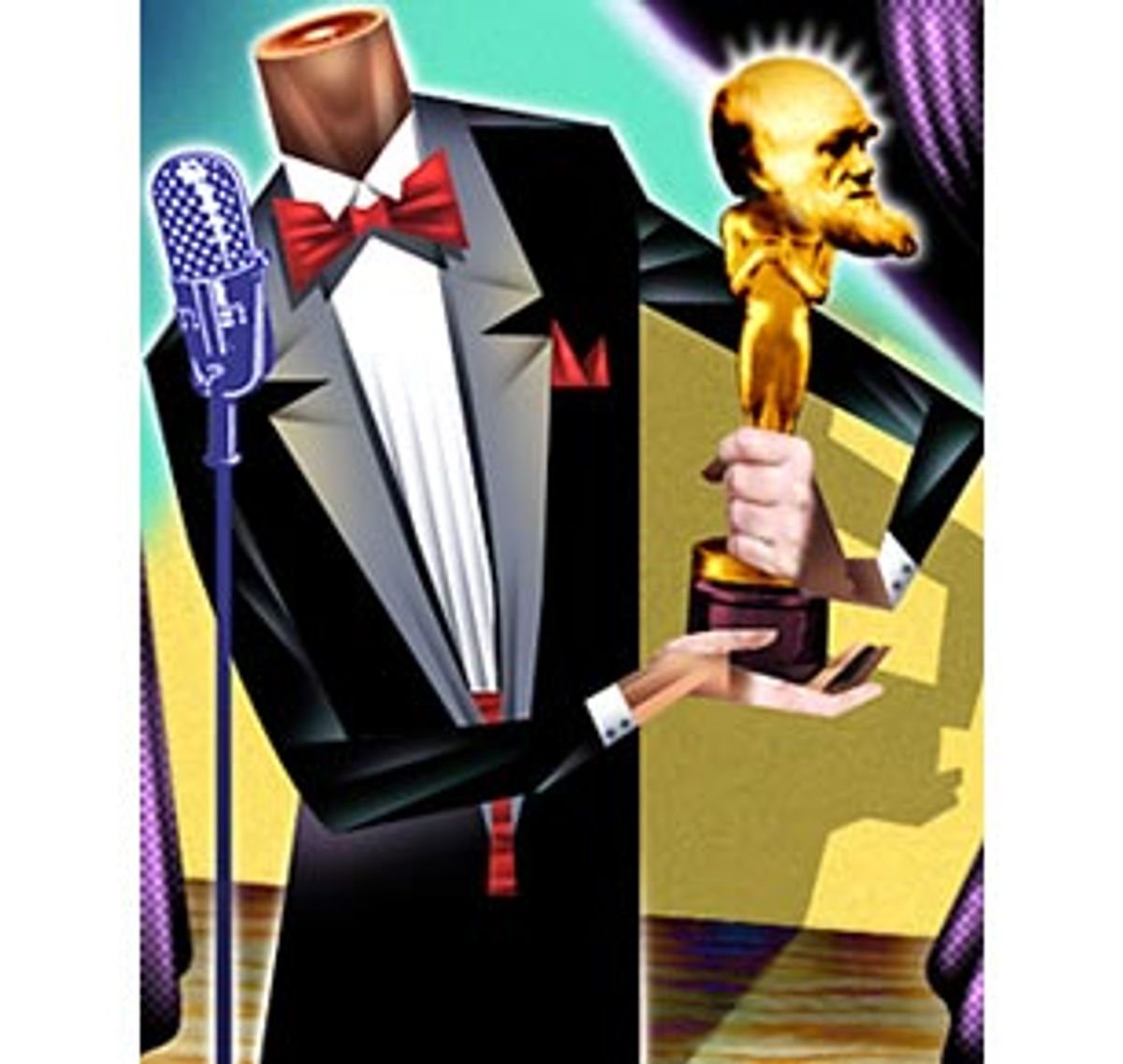 Who hasn't fantasized, at least once, about their own funeral? Rain, the soft sobs of the bereaved, an occasional wail, some fainting, a barbed eulogy that spares none and a certain person who is very, very sorry?

For the fantasy to meet certain punitive goals, of course, a specific set of circumstances is required: The death should be untimely, exotic, romantic, preventable and tragically unfair. It is preferable for the demise not to occur with pants around ankles. Also, under no circumstances should the dearly departed make the nominee list for the Darwin Awards.

Awarded biannually to recipients now forever unable to collect statuettes in person, the Darwin Awards "commemorate individuals who protect our gene pool by making the ultimate sacrifice of their own lives" by "eliminat[ing] themselves in an extraordinarily idiotic manner, thereby improving our species' chance of long-term survival."

Collected and verified by a Berkeley-educated molecular biologist (alias "Darwin") who went on to do research in neurobiology at Stanford (where she first heard the term "Darwin Awards"), the stories range from the sublimely ironic to the pathetically stupid. Most evince a taste for experimentation -- a kind of trial and (fatal) error -- that vividly illustrates the concept of "evolution in action."

This year's winner: "Living on Zionist Time," in which the switch away from daylight savings time turned the tables on a group of Palestinian terrorists who had neglected to note that Israel had made a premature switch from daylight savings time to standard time due to a religious holiday. The bombs had been prepared in a Palestine-controlled area, and set on Daylight Savings time. The drivers had already switched to standard time, and the cars were still en-route when the explosives detonated.

And the runner-up: "Firefighters Ignite!" Seven firefighters decided to impress their chief by setting fire to a house, then heroically extinguishing the blaze. The men apparently hatched the plan in order to help a formerly fire-fighting friend return to duty. Unfortunately, the friend's career plans were irreversibly snuffed when he became trapped while pouring gasoline inside the house.

Impressed by these and other hare-brained notions gone awry, I spoke to "Darwin" about the forces at work behind such actions.

Is there such a thing as a stupidity gene?

A stupidity gene! Well, if there were a stupidity gene, I think it would have to be pretty much eradicated by now ... unless it keeps springing up with random mutations.

Why would that be?

Well, if there were a stupidity gene, the unfortunate owner of the gene would make fatally ignorant decisions more often than average. Therefore, the stupidity gene would be selected against so heavily that it couldn't linger in population for more than a few hundred generations ... unless there was a selective pressure that made it desirable in some circumstances.

Well, one of the positive side-effects of a stupidity gene might be that it would make someone take risks that an average person would not. Maybe that would lead to some new discovery, like cheese. Maybe it was the stupidity gene that made someone eat sour milk. But it led to a whole new food product.

I was thinking about that. A lot of these stories seem to involve some pretty innovative thinking.

Oh yeah! Right. If there are multiple stupidity genes, then having one or two might make someone creative, while having a dozen would make her a dangerous idiot.

For example, the fisherman who electrocuted himself ...

Yeah. He had a great idea! [This 1999 Darwin Award runner-up connected cables to the main power supply of his house, dropped the other end in the river, waited for a batch of electrocuted fish to float to the surface, and then waded into the water to retrieve his catch.]

The difference seems to be the decoupling of a new idea from an examination of the risks involved. If the risk-taker neglects to consider the deadly consequences, then only luck can save him from an embarrassing outcome. For example, Benjamin Franklin experimented with lightning using a key tied to a kite. I think that story is apocryphal, but it would be a good example of luck saving an innovator from disaster.

Is there a neurological explanation for the phenomenon that allows us to do something really stupid at the exact same moment we're thinking, "This is really stupid?"

We can follow several lines of thought in parallel. Once a hypothetical "great idea" reaches a critical juncture and begins to trigger a physical response, a parallel cautious line of thought might not be able to interrupt that response before it translates into action. If you've ever done something stupid, and thought a split-second before tragedy befalls that it might not be such a clever plan, then you've experienced the effects of parallel mental processing. It's rare for someone to think, "I didn't even see the consequences coming."

Is that some sort of synaptic misfire at work?

It only takes 20 microseconds for a single synapse to fire, and the activity of millions of neurons creates a thought. In the course of a few seconds, your brain can make thousands of decisions. But it may be that some people physiologically take longer for a synaptic transmission to pass from the brain through the spinal cord and to the muscles, triggering an action. And if one has a longer delay, that would allow more time to imagine drawbacks and interrupt the action before the muscles actually move. We do a lot of things on impulse, without thinking them through.

If your reactions are slower, then maybe you're less impetuous and you don't win as many Darwin Awards. But, if you're slower to react, you won't react as quickly to an elephant that's about to trample you, or any other dangerous events.

Off the cuff, I can think of two. The stupidity of not being able to predict dire consequences, and the stupidity that results from not paying sufficient heed to the consequence that you do foresee.

Is man the only animal that dies of stupidity?

Yes, I think so. We have foresight. Without the ability to imagine different outcomes, an animal can't select the best path from multiple options, and therefore can't make a stupid choice. Although I do think that dolphins and chimpanzees could easily be Darwin Awards contenders, if only we knew what they are up to.

The idea of the site is to show evolution in action. Are you trying to demonstrate how some people's stupid behavior may have a hand in keeping the rest of us smarter -- by eliminating morons from the gene pool?

In an evolutionary sense, yes, people who die can't contribute to the gene pool any longer, so those who die from their own stupid actions are preventing themselves from passing their unfavorable genes along to the next generation. The contributors to my philosophy forum are in favor of requiring a school subject called "History of Errors" to teach our youth how to predict consequences. It would be interesting if we could raise infants from 20,000 or 30,000 years ago and see if they are less adapted to survive in today's environment.

Would they be a little more cautious?

Evolution is highly dependent on the environment -- having a single unchanging environment is important, because it takes many generations to evolve adaptations. And we have so many new things now, like smoking on top of an oil well. That's something that's only been possible for maybe a hundred years.

Do you think we're getting smarter or dumber?

I think that we've possibly reached an asymptote of intelligence. We're intelligent enough to entirely manipulate our environment. We may have reached a point in human intelligence where there may be no selective pressure to evolve more intelligence. What would it get us? We're at the top.

Do you think there may be selective pressures to become less intelligent, then?

Well, it does seem like we're putting warning labels on everything now -- like, "Do not spray this oven cleaner into your mouth." Do we need that? I don't think we're there yet.

So why do we need those labels?

Good point. And we actually don't have that everywhere. In fact, if you go to Hawaii, you can go right up to the precipice of a volcano, and there'll just be a little sign saying, "Do not go beyond this point. You will fall and die." Whereas, in the continental United States, you'd find an actual physical barrier preventing a person from falling off accessible cliffs and bridges.

Or from spraying oven cleaner in your mouth.

Yeah, they'll probably start making the tops of those too big to fit in your mouth.

It seems like so many people are doing these things which seem to me like the equivalent of sticking your finger in a socket. Is this the way we're going to go, as a species?

You mean with a little whimper?

I was thinking more with a bang.

Yeah, there's no common sense behind that [arms build-up or nuclear proliferation]. You know, I heard a proposal today that we apply an intelligence test to the politicians we're about to elect, particularly the president. Don't we have the right to know how well they can consider the consequences of their actions?

You know, I was just thinking that, from an evolutionary point of view, I may actually be doing a disservice to the goal of increasing intelligence by giving notoriety to people who commit some really foolish acts. Because that leads to them having more popularity, which would make it easier for them to find wives and husbands.

What is so funny about a humiliating death, anyway?

Almost all of our humor involves laughing at the misfortunes of others. So I guess it's that we find it funny when people die doing something that could have been easily foreseen and prevented. There's also a strong approval for seeing someone get their just rewards. A person who keeps a loaded gun on the nightstand deserves to shoot himself in the head when he sleepily answers a late-night call.