Ad biz pooh-bahs at a New York party critique the good, the bad and the dot-coms in the industry's biggest showcase. 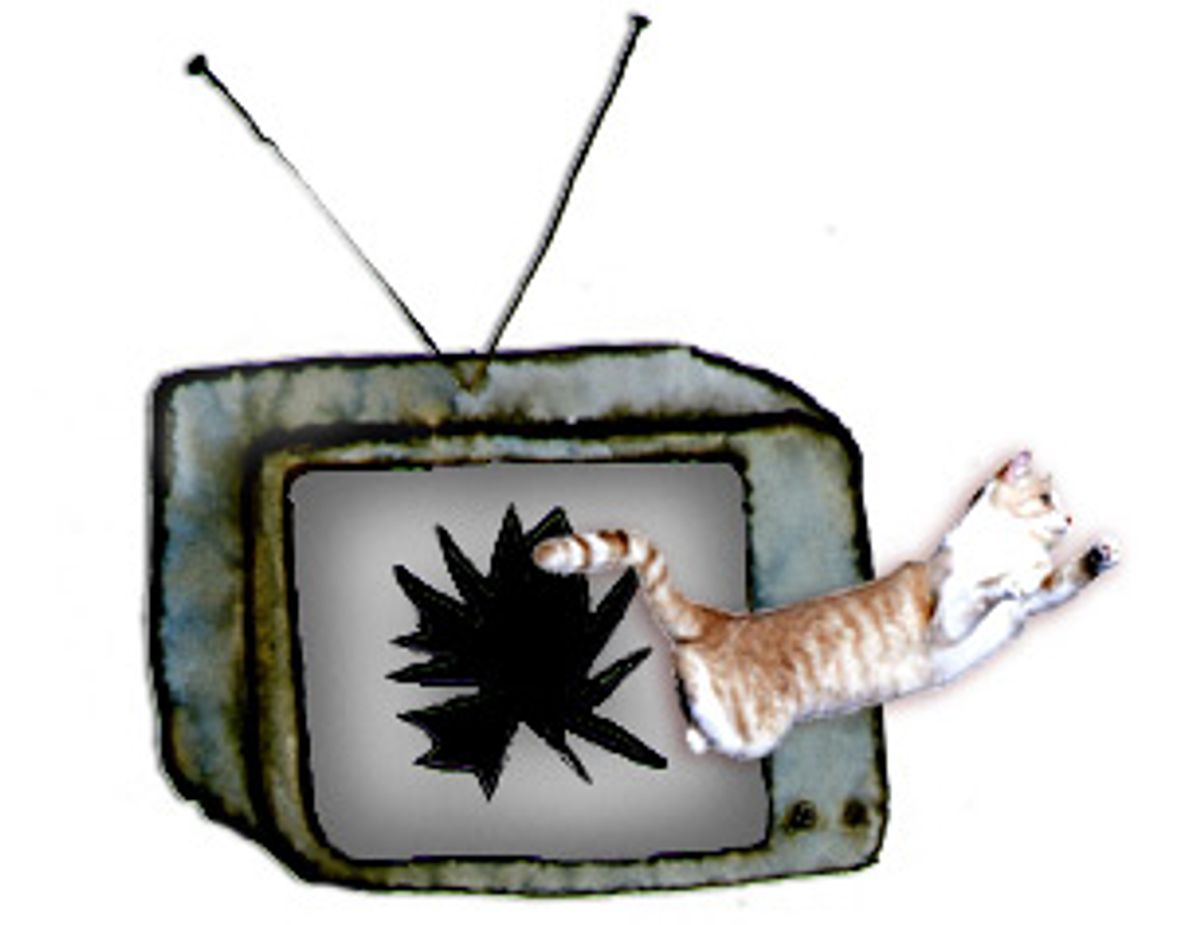 It's now a clichi to note that the Super Bowl ad blitz has become a parallel spectator sport to the game itself, a $135 million soap opera with its own winners, losers and squalling corps of color commentators. But to the guests at Bill Westbrook's party Sunday night, the Ad Bowl was no game-inside-a-game. It was the game.

For the last few years, Westbrook, who is worldwide president at the New York agency Fallon McElligott, has generously opened his plush SoHo apartment on Super Bowl Sunday to fellow agency types who share his preference for tag lines over linebackers. In this brand-building Bizarro world, guests all but tune out the game -- even this year's spellbinder -- perking up only when the announcers cut away to the commercials. The air hums with shop talk.

"What do you think of the letterbox?" the guests ask each other as they feast on a folksy repast of chili and barbecue. "Doesn't it arrest your attention?" A whimsical TBWA-Chiat Day spot for Pets.Com provokes widespread guffaws. "All those titles in the left-hand corner!" marvels a Fallon design director. "What a fuck-up!"

It soon becomes clear that this is a tough crowd. Westbrook's party, not surprisingly, tends to be a Fallon-centric affair. And, within the industry, Fallon is considered forbiddingly chic -- Helmut Lang to Ogilvy's J.C Penney. "It seems casual, but it's pretty political," whispers a copywriter. "You have to know when to laugh, and what to slag."

As they recline on leather couches, feasting their eyes on Westbrook's 58-inch TV, the brand mavens resemble jaded fashionistas at a disastrous runway show, all crossed arms and indulgent smiles. "Light on concept, big on execution," scoffs one guest of Autotrader.com's 30-second spot.

"How did they sell that to the client?" giggles his friend. "'OK, so then all these cars are going to come into the frame!'"

"Maybe they made a diorama," someone else says.

A Budweiser ad provokes more slagging. "The old talking-dog gag." "Everyone loves a talking dog!" "And it even looks real!"

Many companies, particularly the ubiquitous dot-com rookies, seem a mite ambitious in their estimation of what the average Super Bowl watcher could grasp. Microstrategy's 30-second spot features the following plot line:

1) A harried business traveler gets a message on his cell phone, informing him that his flight has been canceled. 2) He reschedules, and runs to a new gate. 3) In the chaos, someone steals his credit card. 4) The credit card is triumphantly recovered when the thief tries to use it to buy a plane ticket.

The convoluted spot provokes widespread groans. "That's more than happened on tonight's episode of 'The Sopranos,'" chuckles Michael Fanuele, director of account planning at Bozell Worldwide. "It's got to be incredibly simple," agrees Judith Grey, an art director at Fallon. "The creative director should have said, 'Out, out, out. I need a three-line super that explains the whole thing.' As much as we want to perceive ourselves as artists, you've got to keep in mind that these ads are being seen by drunk people in noisy bars. They have to work like billboards."

A parody of a Gap ad, in which gyrating dancers are mowed down by a gleaming Oldsmobile, is pronounced a waste of a good idea. "The payoff at the end should have been better," carps Neil Powell, creative director and managing partner at Fallon. "They should have somehow kept it straight. It would have been more effective if it had kept you wondering: Was it a Gap ad? Or was it a car ad? I hate to see such an obvious cut to a hard product payoff."

Some ads go over big. The group is impressed by a first-quarter Mountain Dew spot, which features a Dew drinker cycling manically across an African plain to reclaim his soda from a cheetah. "Does Mountain Dew really make you bike that fast?" "All I can say is, anyone who isn't drinking Mountain Dew is an idiot." "Fire up the Dews!"

Someone else volunteers that "cheetahs are really expensive to rent." Nods of agreement all around.

"Too many ornaments on that Christmas tree," says Powell. "That one just merged too many ideas," agrees Judith Gray. "It's what you call a long walk for a short drink."

Suddenly -- "Hey, isn't that our BMW commercial?" Shushes all around. The 30-second spot features a woman skiing down a steep slope. The only sound is the whoosh of her skis slicing through the snow. The spot ends with the written tag line: "It's not a feeling you can get every day -- or is it?"

Loud whoops all around. "Yeah. Go Fallon. Love the letterbox." But amid the cheering, there are a few discreet rumbles of dissent. "The set-up was way too mundane," whispers one creative, who is seeing the ad for the first time. "If you've got to have the tried-and-true structure, why not do something that will shock viewers? The skier should have been nude or something."

"We had a lot of ideas originally," confides a creative who worked on the account. "I think the skier actually was nude. But BMW is a really conservative client. They said, we love it -- but the skiers have got to wear comfortable ski clothing."

The room grows quiet again. Another Fallon spot is coming on. This one tugs with both hands at the heartstrings. The ad, for the bond company John Nuveen & Company, has been digitally composed to show Christopher Reeve rising from a chair and walking across a stage. As the music soars, a tag line flashes across the screen: "Leave your mark," it reads. Even the most hysterical disciple of Ayn Rand might find the equation of a soul-stirring medical miracle and the profits generated by bond trading a bit of a stretch, but the group breaks out into wild applause. Brian Murphy, Fallon's design director, is pink with pride. He leans over and asks me if I noticed Nuveen's "new identity." "New identity?" I ask. "Yes," he whispers. "Nuveen has a whole new approach to identity. A new logo. New typography. Before, it was a hard '70s look. Very geometric. Now, it's much softer. It's classy, simple, sophisticated." Ah.

Late in the third quarter, we hear the twang of country-Western music. "Here we go!" someone screams. "Herdin' cats!" The Fallon spot, for Electronic Data Systems, is the funniest ad I've seen all night. It parodies an old-style western, with grumpy cowbows herding thousands of house cats across an open range. "Being a cat herder is probably the toughest thing I've ever done," one of the craggy-faced cowboys says in his best John Ford, brushing cat hair off his jacket. The three-line super informs viewers that "in a sense," this is what EDS does: "We bring together information, ideas and technologies, and make them go where you want."

That "in a sense" epitomizes the challenges the money-burning dot-coms have in crafting effective ads. What they're selling is so abstract that almost any narrative, no matter how clever, feels disconnected. EDS might as well have shown a bunch of screaming Japanese soldiers emerging from a pillbox, or a photo of a galaxy exploding. How far can you pull a metaphor before it snaps? EDS -- for all your cat-herding needs! People will remember the clever ad, but will anyone remember which one of the 8 zillion dot-coms made it?

The Fallonites are proud of themselves. "High fives for cats!" "Go, Fallon!" The conversation turns to just how the production people were able to create the illusion of thousands of cats paddling across a river. "How'd you pull that off?" someone asks. "Cats don't swim." "Mirrors and wires," one of the creatives says cryptically. Another volunteers that it was "catnip in the water."

I never do find out exactly how they did it. My attention turns to another part of the room, where a Bozell executive is worriedly telephoning his account director. It seems one of Bozell's clients, the National Fluid Milk Processors' Board, has filmed two ads, starring quarterbacks from both St. Louis and Tennessee. The plan was to show the ad featuring whichever quarterback was ahead in the fourth quarter. "They were going to choose one of them to steal the milk," he tells me. "But one of them just got injured. It would be really strange for the ad to show a quarterback who got hurt." The executive hops about frantically until someone takes pity on him and informs him that Blaine Bishop, the injured player, is actually not a quarterback, but a defensive back.

After the game, I walk home with Dan Rollman, an earnest young copywriter fresh out of creative school. Rollman and I talk about how the most noteworthy characteristic of Super Bowl XXXIV was not the blur of rookie dot-coms, but the rise of meta-advertising -- a spurt of advertising about advertising, and about Super Bowl advertising in particular. There was the Oldsmobile ad about the Gap ad. There was the E-Trade ad with a dancing monkey and the tag line: "We just wasted 2 million bucks." There was the low-budget Lifeminders ad proclaiming itself "the worst commercial on the Super Bowl."

What to make of Madison Avenue's increasing self-obsession? "Where do advertisers draw their inspiration from?" Rollman asks rhetorically. "Other ads. You saw what we were like tonight. We're obsessed with ads. It's a little disturbing."

Rollman sighs. "Maybe there's a point where you need to take a timeout and reconnect yourself to the real world," he says. "You need to remind yourself of all the brilliant ideas you could derive from other places ... Maybe we shouldn't have sat there watching all these Super Bowl ads. Maybe going out and watching a movie tonight would have been better inspiration."

Or hey, maybe even the game itself.