"Joseph McCarthy: Reexamining the Life and Legacy of America's Most Hated Senator" by Arthur Herman

A revisionist biography argues that the red-hunting senator got a bum rap. 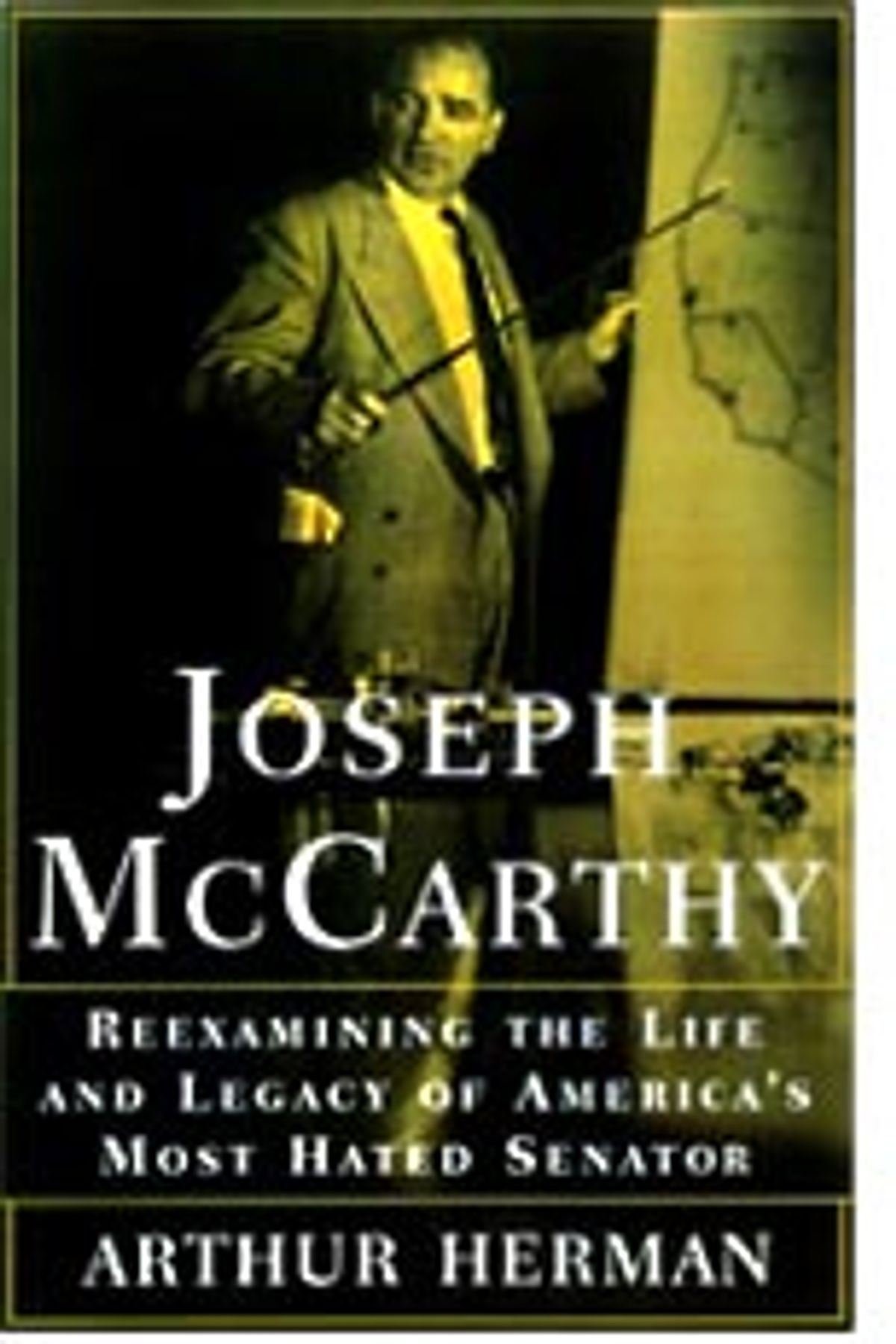 In common usage, Joseph McCarthy's name has become
synonymous with making groundless accusations, seeing enemies
everywhere and chasing at phantoms. Even writers relatively
sympathetic to the goals of the anti-communist crusade of the
1950s depict the Wisconsin senator who led it as a bully, a
demagogue and a drunk. Arthur Herman, an adjunct professor of
history at George Mason University in Virginia and the
coordinator of the Western Civilization Program at the
Smithsonian Institution, observes in his "Joseph McCarthy" that
for today's commentators there's no risk in deriding McCarthy and
little percentage in defending him: "McCarthy remains what the
Germans would call vogelfrei -- the 'free bird' everyone
and anyone is free to take a shot at, even 40 years after his
death. Today he exists in most people's imagination almost solely
as an established icon of evil."

Herman believes that's an unfair picture. If nothing else, it's
an incomplete one because Americans had legitimate reasons to
fear Soviet infiltration in the immediate postwar years. The
United States and the Soviet Union were just about the only major
powers left standing, their interests were bound to clash and
there were nuclear weapons to worry about. Before and during the
war, a substantial number of leftist intellectuals and
institutions in the West were broadly supportive of the Soviet
Union; lured in by the dreamy, "let's all share things" theory of
communism, they ended up countenancing purges, show trials,
political murders and intentional famines.

Herman certainly isn't the first to point that failure out -- or
to argue that the apparatus of the Communist Party of the United
States was basically under Stalin's control. Simply put, there
was plenty of spying going on, and it seems that some of the
people offering foreign-policy advice to U.S. leaders were
willing to let parts of Europe and Asia fall under communist
control. That might come as a surprise to those who learned
everything they know about anti-communism from Arthur Miller,
Hollywood and the Nation, but scholars who have studied
declassified Soviet-bloc documents and other historical materials
have been saying it for years.

Obviously, that doesn't mean that all or even most American
communists were spies or in any position to influence American
foreign policy, or that it was right to hound people because of
their political beliefs. Even among hardcore anti-communists, the
rap against McCarthy has always been that he was more interested
in grandstanding than in identifying actual infiltrators and
building strong, factual cases against them. Herman's book
doesn't do a whole lot to counter the charge. "Those who knew
McCarthy were constantly discovering to their astonishment how
little McCarthy knew about the theory or practice of communism
itself," Herman says, and in so saying he makes the senator's
supposedly principled anti-communist stance look more like a
free-floating xenophobia that just happened to home in on the
right target.

Make no mistake: Herman has exhaustively researched McCarthy's
life and work, and he dutifully cites the countless mistakes and
outrages McCarthy committed. What's bizarre is that none of them
seems to have provoked a flicker of indignation in the author.
For example, when Herman considers McCarthy's vicious attack on
Gen. George Marshall in 1951, he refuses to take the senator's
words at anything other than face value. "If Marshall were merely
stupid," McCarthy lashed out, "the laws of probability would have
dictated that at least some of his decisions would have served
this country's interest. ... We have declined so precipitously in
relation to the Soviet Union in the last six years, how much
swifter may be our fall into disaster with Marshall's policies
continuing to guide us?"

Ignoring the obvious implications of McCarthy's statement, Herman
complains, "Critics bandied it about that McCarthy had called
Marshall a traitor (he had not), a secret Communist (he had not),
and even a coward." Is Herman incredibly literal or just naive?
It's certainly useful to try to understand, from the senator's
point of view, why McCarthy did what he did. But at times Herman
simply takes leave of his own judgment. And some of the excuses
he offers for McCarthy's conduct are astounding. McCarthy
"decided to lump where others took care to split," Herman shrugs.
Oh, was that it?

Despite its flaws, Herman's book is fascinating, and it visits a
lot of interesting territory: McCarthy's friendship with the
Kennedys, his strong political support among Catholic voters, the
tactical mistakes that led to his eventual downfall. And Herman
makes a strong argument that the grounds on which the Senate
censured McCarthy were tenuous at best. But even then, Herman
takes his own argument one step too far. He compares McCarthy to
the victims of Stalin's show trials, who, after their convictions
for nonexistent crimes, were hauled off and executed. For all of
Herman's efforts to explain McCarthy's excesses, the resulting
book is not at all flattering -- to its author or to its subject.