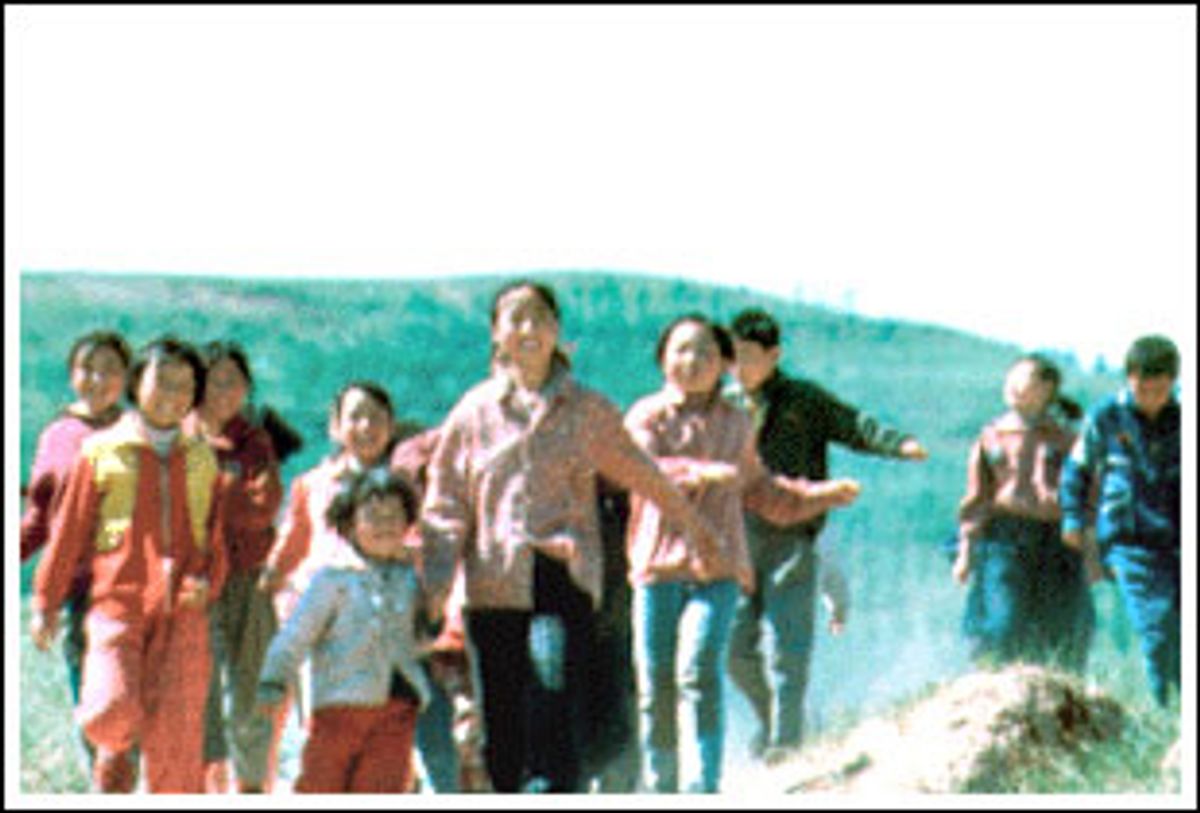 Zhang Yimou's "Not One Less" offers a harshly realistic depiction of poverty in rural China, but it's also a movie with a peculiar comic dimension. It begins with a tone of gentle whimsy, as the 13-year-old heroine becomes the most ill-equipped teacher in the history of education, and ends in irony as she morphs into an accidental TV celebrity. Throughout, "Not One Less" is a tender-hearted fable about those left behind by the exploding economy of contemporary China.

This film may seem slow, and its concerns distant to many American viewers. But "Not One Less" is a movie whose humanity is irresistibly, even joyfully, accessible. In its own modest way, it's also daring. This tale of a young schoolteacher's impossible odyssey in search of a lost pupil unites technique and subject matter to create a highly compelling, sensually rooted realism that goes beyond the clichis of the "village movie." As a chronicle of childhood in desperate circumstances on the underside of the Information Age, it belongs with Walter Salles' "Central Station," and, like that film, it shares something of the quiet, mythic tragedy of Vittorio De Sica's "The Bicycle Thief."

Made entirely on location without professional actors, "Not One Less" also marks a significant shift in the career of director Zhang, the leading figure -- along with his peer and rival, Chen Kaige -- in what a decade or so ago was dubbed the Chinese New Wave. Zhang is best known in this country for "Ju Dou" (nominated for the Best Foreign Film Oscar in 1990) and the even better "Raise the Red Lantern," and he has long been identified as the "peasant director" for his fascination with the textures and strictures of rural life.

Most of Zhang's earlier films were intimate dramas focused on the hidden lives of women in traditional Chinese society, and all featured the remarkable actress Gong Li (who was also Zhang's significant other). With their personal and professional partnership apparently over, Zhang here strips down his passion for dusty authenticity to its most unadorned essentials. (Meanwhile, Chen has gone about as far as he can go in a completely different direction: His 1999 film, "The Emperor and the Assassin," a magnificent historical epic, was the most expensive film ever made in Asia.)

There is another female character at the center of "Not One Less," but she is nothing like Gong. Wei Minzhi is a 13-year-old girl drafted to do a grown-up's job. When the grizzled schoolteacher (Gao Enman) of the decrepit and desperately poor Shuiquan Village departs to visit his dying mother, Wei must fill in for him, teaching kids just a little younger than she is. Like everyone else in the movie, Wei's character bears her real name, but unlike the others she was cast as the result of extensive auditions. While it's impossible to know how much she is acting (or even what that means in this case), it's almost physically painful to watch her angelic countenance fill in with red splotches as she battles her natural shyness.

Facing her rambunctious students -- who abuse and manipulate her with almost anarchic glee -- Wei knows she is supposed to act like an adult, but cannot quite bear to. She tries to teach the children songs but forgets the words, almost immediately destroys the precious sticks of chalk Teacher Gao has entrusted to her and often simply imprisons the kids in the ramshackle one-room schoolhouse and hopes for the best.

Almost the only mandate Gao and the village mayor (Tian Zhenda, the actual mayor of Shuiquan) have given Wei is not to lose any more pupils; the school's declining enrollment threatens its funding, even if that funding is highly notional in the first place. When a track coach from the big city shows up to offer a scholarship to the school's best athlete, Wei's stubborn streak first rises to the surface. Ultimately her half-farcical attempts to conceal the girl fail. When Zhang Huike, the big-eyed, 11-year-old trickster who is her principal classroom nemesis, is next to disappear, Wei vows to find him.

Discovering that Zhang Huike has been sent to work in the city by his debt-ridden family, Wei rallies her students to the cause of rescuing him -- even eagerly teaching them arithmetic by way of figuring out how to get a bus ticket. Some of this is quite discouraging; one student calculates (incorrectly, as it turns out) that the entire class will have to work in the local brick factory for 175 hours to pay for Wei's transit. The sweetness and uplift of these scenes, while undeniably charming, may seem a bit slight compared to the fatalism of Zhang's earlier movies (think Frank Capra translated into Mandarin). Audiences in Zhang's homeland, of course, understood that if Zhang Huike's story is fiction, what it represents is not. (A title at the end of "Not One Less" explains that a million children drop out of primary school every year in China.)

Ultimately, all the students' gleeful strategies for getting Wei a bus ticket come to nothing, and she reaches the city only after an arduous journey, partly on foot and partly by hitchhiking. (The city used in the film is Jiangjiakou, in central China, but I imagine the point is that it could be almost anywhere in the developing world.) Predictably, her search meets with only blasi bureaucratic indifference if not outright hostility, she quickly squanders what little money she has and she is soon sleeping on the streets, no better off than Zhang Huike himself. For the first time in Zhang Yimou's work, we see a remarkable panorama of urban life in the new China. From the restrictive, overly intimate world of the traditional village, Wei is catapulted into an anonymous future where some people have cell phones but still sleep in the train station.

But the technological society that seems to have totally abandoned Wei and Zhang Huike abruptly gathers this lost girl and boy to its breast (after Wei has spent two days camped outside the local TV station), resulting in a climax that is deeply touching without ever losing its bite. Zhang Yimou has said he intended "Not One Less" (which is adapted by Shi Xiangsheng from his novel) to reach a large popular audience in his homeland. A cynic might say that this desire accounts for the relatively happy ending. On the other hand, perhaps Zhang, now almost 50, is no longer the angry young artist who went to war with his own government over "Ju Dou" (which was virtually banned within China). Someone who understands the history of Zhang's complicated relationship to the Chinese authorities better than I will have to parse the political significance of "Not One Less." For me, it's a gentle, deceptively artless delight, shaded with sadness. That's more than enough.