Protesting the police killing of Amadou Diallo is no way to organize a movement for social justice. 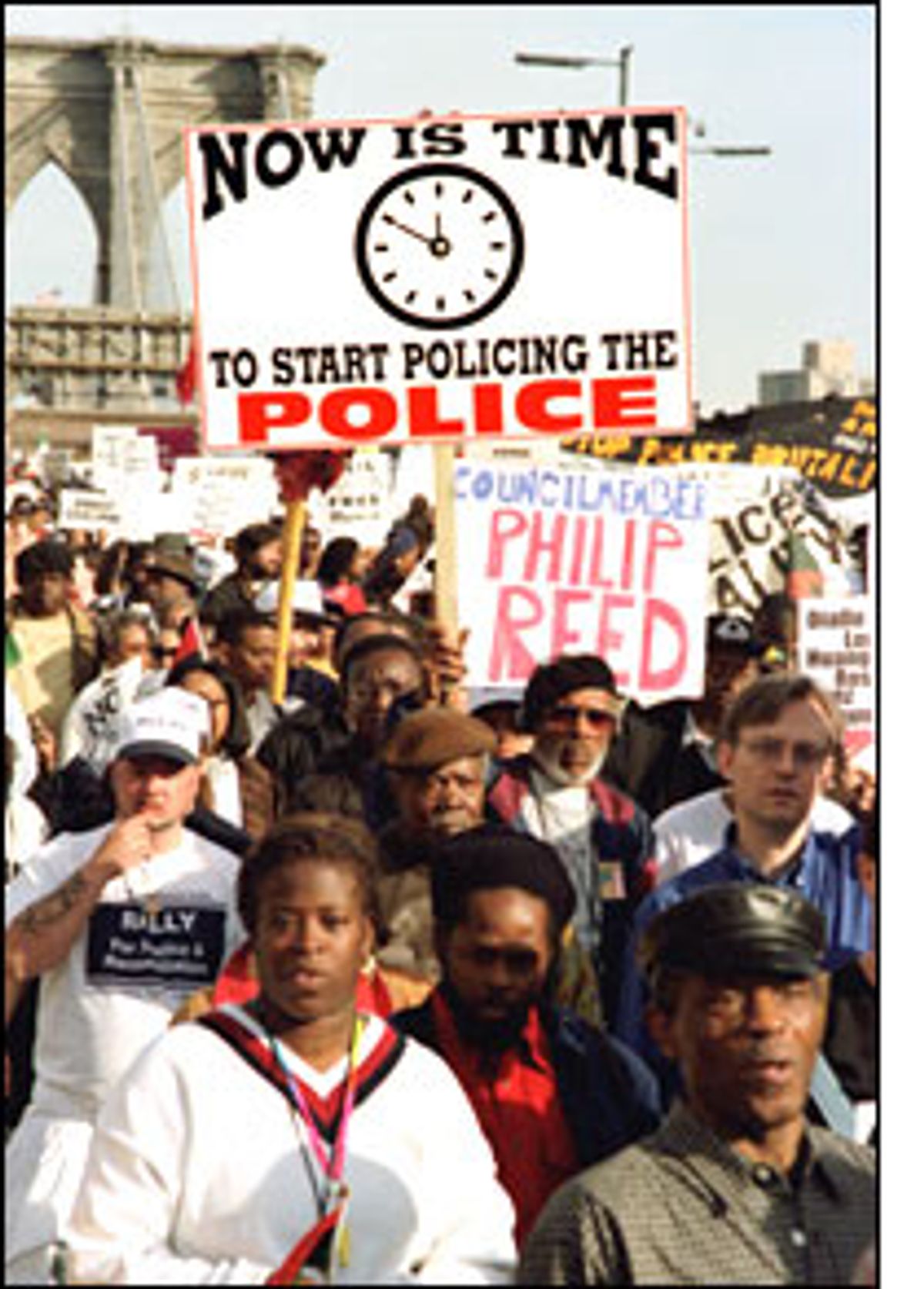 In 1989, when a grand jury discredited Tawana Brawley's claim that she'd been raped by white law enforcement officers, a defiant Rev. Al Sharpton brought her to the trial of six young men charged with raping and nearly killing a jogger in Central Park. Incredibly, he had her shake hands not with the victim (who lay comatose in a hospital) but with the defendants who'd soon be convicted of violating the jogger.

Sharpton claimed that the defendants, black and Hispanic, were being "railroaded" and that Brawley should "see how the criminal justice system responds differently for a white victim than it does for a black victim." But the "system" had sought perpetrators aggressively in both cases, regardless of color. It was Sharpton who responded differently, to reinforce the lie that assistant district attorney Stephen Pagones, the Brawley case's true victim, was a racist and rapist.

The lesson is that racially charged criminal trials and movements for social justice don't mix well, even in the case of the moment -- that of four New York City police officers who pumped 19 bullets into an innocent African immigrant, Amadou Diallo. Such cases win justice, if at all, only by subverting and confounding the sweeping racialist and ideological narratives that get attached to them -- in this case, not only by Sharpton but by media moralists at the New York Times, which has flogged the Diallo case relentlessly and myopically as the fount of a new "movement" for social justice.

As New York's monthly City Journal
noted, in the first eight weeks after the shooting the Times ran more than
three stories on the case every day, many asserting that, as one headline put
it, "Dazzling Crime Statistics Come at a Price." Editorial after editorial
proclaimed the rise of a new "movement" against police abuses of minority New
Yorkers. Times
stories and another editorial read like promotional leaflets for an April 15
Diallo protest march over the Brooklyn Bridge. Yet attendance was anemic,
suggesting few in the city shared the Times's sense of what Diallo's killing meant.

Dramatizations of oppression may be compelling in churches or cultural theaters, but they don't work in and around courtrooms, where people of vastly different persuasions have to affirm and enforce the legal and civic rules by which, to adapt Rodney King's plaintive words, we all get along. And yet from the Brawley and jogger cases, through the O.J. Simpson trials, up to Diallo, the nation has watched as impresarios of racial street theater, political opportunists and naive media moralists sidetrack American liberalism again and again by turning criminal cases into "show trials" of their ideological opponents.

No one should have to die as Diallo did. To affirm this, many New Yorkers got themselves arrested at police headquarters, ceremonially but no doubt sincerely. Had he been white in a mostly white neighborhood, argues New York University law professor Jerry Skolnik, cops wouldn't have cornered him in a vestibule and shot him. The Bronx district attorney accused the cops of harboring racial preconceptions that, beneath the formal courtesies of everyday etiquette and the law, deny blacks a chance to change misperceptions of them. And in this case Diallo paid for that misperception with his life.

But that argument itself harbors a preconception of what was in these cops' heads. Diallo's death may have reflected not the "racism" that looms so large in the liberal imagination but the stark correlation of violent crime with nonwhite skin -- in statistics and in cops' hard-won experience. The Diallo cops' Street Crime Unit doesn't operate in middle-class neighborhoods, black or white, as much as it does in poor black ones. But racism doesn't explain that discrepancy; the demographics of violent crime do. A disproportionately high number of police killings of blacks are by black cops. Washington, D.C.'s heavily black police force uses deadly force far more often than New York's does.

Yet charges of racism often succeed politically. Soon after the Brawley hoax and jogger trial, Sharpton's marches to protest the clearly racist murder of young Yusuf Hawkins in Bensonhurst (a section of Brookyln, N.Y.) helped promote the idea that David Dinkins should defeat Ed Koch as mayor, even though Dinkins had no fire in his belly for the run and was so ineffectual against both violent crime and racism that, four years later, Rudolph Giuliani defeated him.

Those who used the Bensonhurst murder against Koch want to use Diallo against Giuliani, of course. Never mind that police shootings are down so much that as many blacks were killed by cops in Dinkins' four years as in Giuliani's seven. Since New York's overall homicide rate has been halved, as many as 2,000 African-Americans who'd have been murdered are instead living.

It's just not true that this was accomplished only at unbearable cost to the rights and dignity of poor New Yorkers. In 1994, before Giuliani had been mayor even three weeks, Sharpton denounced the mayor's "war on black New York" after a Harlem mosque fracas, in which cops answering a robbery call were injured as worshipers shoved them down a flight of stairs. Giuliani then refused to meet with Sharpton and others -- and they've tried ever since to make police abuses bring him down.

With Diallo, they thought their chance had come. But after Brawley and O.J. Simpson, fewer people think racism can be captured, or combated, through show trials. Playing politics with death forces a sullen scramble to find pure martyrs on each side of the color line -- a Yusuf Hawkins or a Yankel Rosenbaum, a Rodney King or a Nicole Brown Simpson -- and reinforces the very stereotypes the racial ringmasters claim to oppose.

The early Diallo demonstrations were an ephemeral mix of legitimate anger, naive moralism and political opportunism. Continued agitation -- which is virtually certain now that the officers have been acquitted -- is a political dead end. By calling the Diallo killing a "tragic murder" and courting Sharpton, even Hillary Rodham Clinton makes herself seem the unreconstructed bearer of a politics that has failed. Some liberals' obsessions with cases such as Mumia Abu-Jamal's and Hurricane Carter's mirror conservatives' preoccupations with Waco and Ruby Ridge -- justified, perhaps, but not to the point where ideology displaces effective action on key issues, for both the left and the right.

I'd rather see such dead-end politics upset by the hardier faith of East Brooklyn congregations, South Bronx churches, the Queens Citizens Organization and other mostly nonwhite but doggedly integrated organizations trained by the Industrial Areas Foundation. They build housing (with hard-won help from Giuliani), sustain new schools and fight (against Giuliani) for "living wage" jobs. Their dynamism makes racial psychodramas pale. Not incidentally, they've changed police officers' perceptions of their corners of tough neighborhoods.

Why don't we keep faith with them? Haste to create a "movement" around the Diallo case is a sop to the consciences of white elites, who have no serious intention of redressing the inequities that divide not only whites from blacks but also whites from whites and, these days, blacks from blacks. Doing that requires more than the much-touted but eerily anticlimactic "movement" for racial justice sparked by the deadly bungling that killed Amadou Diallo.