Their names are legion

The Verisign-Network Solutions deal shows how the scramble for domain-name turf has gone from frenzy to insanity. 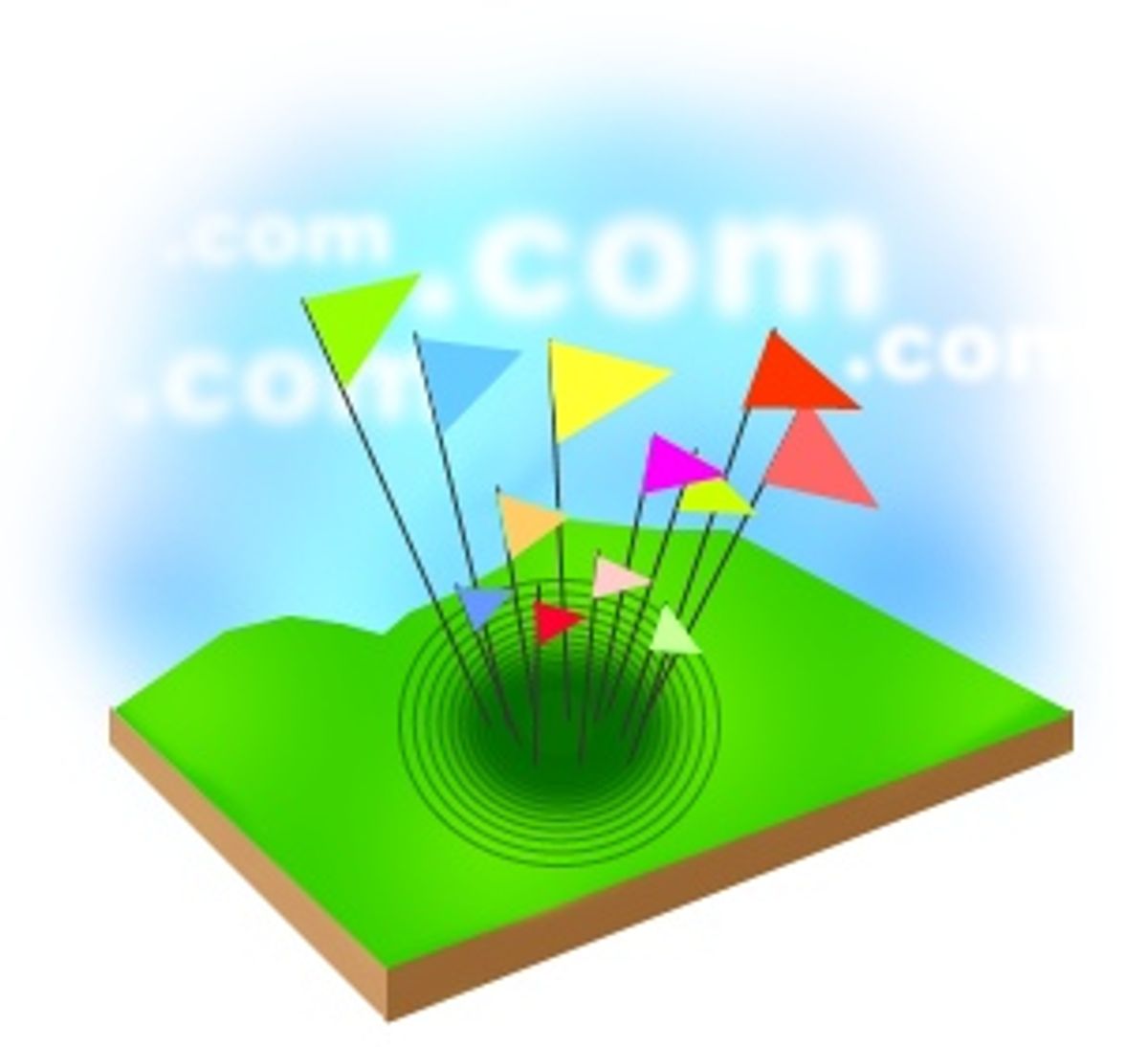 Lately I have found myself addicted to a site called Domainsurfer. This marvelous little technotool is essentially a smart search-engine version of the old Internic "Whois" tool for looking up ownership of domain names.

Want to know how many domain names have been registered that include, say, the phrase "domainnames"? Domainsurfer will tell you (1,362, as of Wednesday, plus 277 for "domain-names"). It will also list up to 800 of them, and allow you to look up who owns each variation, from 0-0domainnames.com (which seems to dead-end on a West Virginia travel page) on down.

"Whois," the venerable tool for finding information on any domain name, provides you with a contact name and address for every individual query. But it doesn't offer the kind of aggregate results Domainsurfer serves up. Only with that level of information can you begin discerning patterns in the domain name game and acquire a sense of the dimension and shape of what Domainsurfer dubs the "domain namespace."

Spend a little time with Domainsurfer and you get a clear picture of just how crazed that game has become over the past six years of the Web's commercialization. Domainsurfer's data covers 12,570,481 records as of March 1. Which means that any conceivable phrase, word or set of characters will turn up an astonishingly extensive array of registered domains.

There are, for instance, 4,439 domains containing the word "Salon" somewhere in their names -- and though that does include a whole set of names built on the Biblical theme "1Thessalonians.com," none of which actually serve Web pages, mostly it's variations on the "salon" concept (both hair and literary). Even if you limit your search to names beginning with "salon" -- a nice capability of the Domainsurfer engine -- you'll find 1,438 names to sort through.

It's hardly news that a lot of people are spending a lot of money to stockpile domain names in the hope that they'll be able to resell them for big bucks. What's increasingly otherworldly is the apparent value some investors are placing on the whole domain-name infrastructure.

Prompting these thoughts, of course, is the news this week that Verisign is purchasing Network Solutions, the company that for most of the Internet's history had a monopoly on the assignment of domain names and that still holds something of a chokehold on the business. (Network Solutions is responsible for the registration of about 8 million of those 12 million-plus names in the Domainsurfer listings.) Verisign has, to date, focused on the sale of "digital certificates," which guarantee the authenticity of electronic documents, and its market valuation is sky-high; that has enabled it to plunk down a jaw-dropping $21 billion for Network Solutions (though the amount drifted down to $17 billion as stock prices fluctuated after the deal was announced).

Even in Net-stock funny-money, $21 billion is a lot of dollars for a business that did a notoriously mediocre job when it was a monopoly and that now faces growing competition as the domain-registration business is opened to other companies under a process set in motion by the Internet Corporation for Assigned Names and Numbers (ICANN). For a comparison, as the New York Times points out, "The deal rivals Lucent Technologies Inc.'s $20 billion acquisition of Ascend Communications Inc. in January 1999 as the biggest high-tech acquisition ever." Ascend sells billions of dollars of Internet hardware each year; Network Solutions sells a pile of names.

To be sure, at $35 a pop, a few million names can add up to a decent stream of revenue -- for now. But new competitors will inevitably undersell Network Solutions, pushing this price, like so many others in the Internet industry, toward zero. And the domain-name land grab will slow as new top-level domains take hold, "dot-com" loses its halo -- and people begin to realize how valueless a domain name is in and of itself.

A lot of the claim-the-domain-name frenzy stems from a group of questionable assumptions: that 1) people are stupid and can't find anything on the Net, so that 2) they will type words in their browser window thinking that it functions like a search engine, so that 3) if you grab the domain names for basic words like "Find" or "Buy" or "Sell" you will be sitting on a gold mine.

No doubt you can nab some amount of Web traffic via this tactic. But it is hardly the path to Internet success. In fact, just about every significant new consumer brand on the Internet has evolved by taking a label that didn't mean much by itself and investing it with an identity and a reputation slowly, over time, through good service and smart marketing.

Barnes & Noble owns the domain "books.com," but that hasn't helped it much in its war upon market leader Amazon.com -- whose name hardly suggested "big online bookstore" at first. "Auctions.com" seems to be owned by the National Hockey League, but when people think of selling stuff online the first name that springs to most minds is eBay. Before it burst on the scene in 1994, who would have thought that the name "Yahoo" was anything other than a put-down directed at rednecks -- or, at best, an obscure reference to Jonathan Swift?

"Location, location, location" is the old mantra for real-estate success, but the logic of successfully locating a business online is more complex: You can't simply nab a slice of the dictionary and expect the world to beat a path to your door. In fact, the more generic the domain name, the harder it is to get people to remember it, no matter how many millions you spend on TV advertisements. This has pushed some Internet companies in the opposite direction -- they're selecting strange-sounding names, like "Flooz" and "Gooey," hoping that the wacky syllables will stick in people's minds.

Every Internet executive launching a site ought to spend some time with Domainsurfer and get a sense of what a wasteland the domain-name registration racket has become. Then, maybe, the creators of new Net businesses could put aside the madness and concentrate on the real challenge -- creating original content and useful services for people. Without that, in the end, a name is just a bunch of meaningless characters.