In space, no one can hear you jeer. 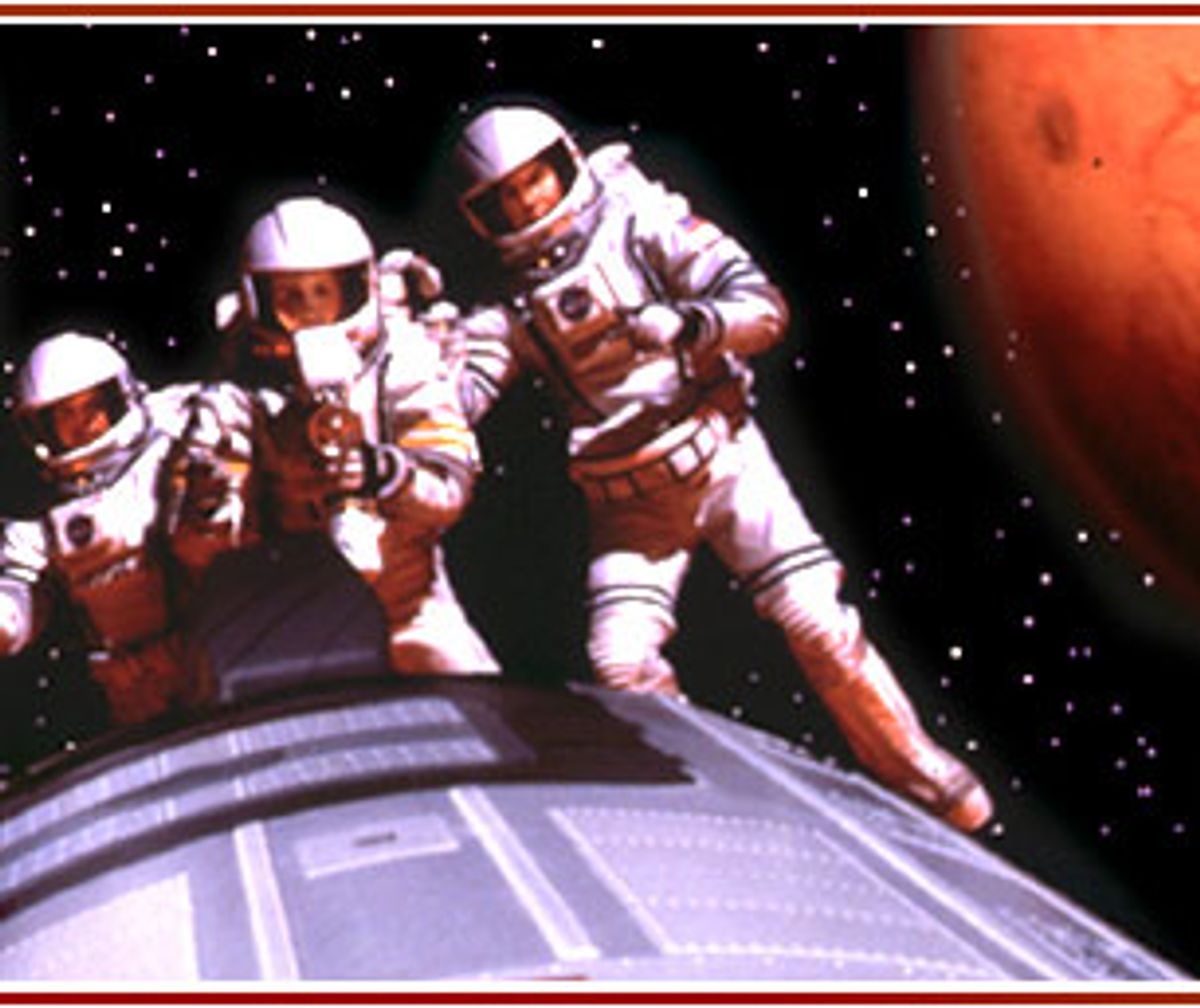 Once upon a time, when Hollywood filmmakers wanted to depict the first meeting between humans and aliens, it was simple: They wrapped a guy in tin foil, put a percolator on his head and called in the military. Then, sometime around 1977 (the year of "Close Encounters of the Third Kind"), the aliens became ethereal New Age beings, bathed in light, with Important Lessons to teach us. Now we can't get rid of the little bastards.

Take Brian De Palma's "Mission to Mars." I'm sure everyone involved with this clumsy and dispiriting attempt at space opera hopes it's rapidly forgotten. But that's not going to be easy. This isn't merely a big-budget dud with a name director; it's the sort of spectacularly misguided A-list movie that invites superlatives. Is it worse than "Ishtar"? Worse than "Waterworld"? Worse than "The Sicilian"? (Definitely, probably and maybe not, respectively.) Wherever it ranks in the pantheon of badness, "Mission to Mars" is startlingly inept from start to finish -- it's atrociously written, poorly shot and edited and fatally unfocused. I've seen plenty of worse movies, but most of them were cheap and cynical. This is an honest, earnest epic that fails on every level.

Furthermore, "Mission to Mars" establishes a new gold standard for embarrassing alien encounters; it'll make you positively pine for the guy with the coffeepot on his noggin. Words cannot describe the feeble sentimentality of this film's conclusion, and anyway, you should be allowed to inflict its dumb-ass secrets on yourself if you so choose. Let's leave it at this: Bambi meets Ally McBeal in an audiovisual presentation out of eighth-grade science class.

Long before its disastrous climax, "Mission to Mars" feels like a grievously poor fit between director and material. It's a slow and drearily expensive film that stitches together fragments from other, better space-exploration movies without ever sustaining any suspense or narrative energy. De Palma's many fans will argue that appropriation is part of his genius, and I agree, but he's never before been so blatant and witless about it.

Most obviously, "Mission to Mars" draws many of its details, large and small, from Stanley Kubrick's inscrutable "2001: A Space Odyssey," right down to the doughnut-shaped spacecraft and the astronauts' wraparound visors. But even if "2001" is in some respects an empty-headed film, its creators certainly thought it was about something. "Mission to Mars" reminds me a little of "Star Trek: The Motion Picture," the Enterprise crew's first big-screen foray; both are films about machines, in which people are only props.

The digital Martian landscapes created by De Palma and his army of collaborators are suitably impressive and provide moments of spooky atmosphere. But the movie is so dense with elaborate computer effects and matte paintings that the director gets almost no chance to show off his trademark bravura camerawork. Even such inherently engaging performers as Tim Robbins and Gary Sinise can do little amid the noise and murk. As always, Robbins is good-natured and Sinise wears his ambiguous sneer, but their characters are cardboard adventure-guy cutouts, dwarfed by the filmmakers' labored efforts to create an epic.

I'm something of an agnostic when it comes to De Palma, but he's unquestionably a director of consummate style and skill, one whose most popular films -- from "Carrie" to "Scarface" to "The Untouchables" -- have become tremendously influential in contemporary cinema. Sometimes his cannily constructed thrillers (like "Dressed to Kill" or "Blow Out") have struck me as soulless, even sadistic, technical exercises, slavishly devoted to the gospel of Alfred Hitchcock. But one thing De Palma has never been, until now, is a crashing bore.

For all the outrageous expense and technical wizardry of "Mission: Impossible," it was an action movie, full of exciting stunts and conducted at the pulse-elevating pace where De Palma is most at home. You might call "Mission to Mars" a stasis movie. It lumbers along, full of miniatures and animated backdrops, its actors more often than not weighed down and made anonymous by their bulky spacesuits. De Palma seems imprisoned both by the film's elaborate settings and by its leaden, telegraphic dialogue.

The screenplay is by Jim Thomas, John Thomas and Graham Yost, from a story by the Thomases and Lowell Cannon, which means "Mission to Mars" is a textbook violation of the inflexible Rule of Three (invented by me): Any film with more than three credited writers is invariably crap.

There are only a couple of scenes in "Mission to Mars" when De Palma feels free enough to work his curious brand of cinematic mojo. Probably the best of these -- which does nothing whatever to advance the plot -- comes on shipboard en route to Mars. Married astronauts Woody Blake (Robbins) and Terri Fisher (Connie Nielsen) take advantage of their zero-gravity environment to spin through the ship in an improvised, weightless tango set to, of all things, Van Halen's "Dance the Night Away."

Sure it's goofy -- if frighteningly plausible -- to watch people in the year 2020 getting down to a cheesy rock song recorded before they were born. But as the camera rolls drunkenly after the delighted couple in a series of tricky traveling shots, the screen comes alive with human energy for almost the only time. Fellow astronaut Jim McConnell (Sinise) stands watching the couple dance, and without speaking or moving Sinise conveys a widower's mixed emotions far better than all the earlier video footage of Jim's dead wife (Kim Delaney) has done.

Before and after that delirious dance number, "Mission to Mars" piles up a collection of hackneyed images and ideas, many drawn from Kubrick's enigmatic masterpiece. We open at a rowdy Texas backyard barbecue the night before Luke Graham (Don Cheadle) is to take Mars One, the first manned mission to the Red Planet, into space. (Somehow I don't think that real-life astronauts spend the night before a launch guzzling brewskis.) Luke is only leading the mission because hotshot Jim pulled out of training to care for his dying wife, so we get an awkward, talky bonding-between-rivals scene straight out of "Apollo 13," "The Right Stuff" or even "Top Gun."

In fact, we might as well be watching any of those movies -- for all the money spent here on simulating Mars, no effort has been made to make Earth in 2020 seem any different from 1960 or 1980. NASA itself appears to have been hit by severe budget-cutting, since all we ever see of it is Armin Mueller-Stahl (in an uncredited performance) sitting at a desk barking out meaningless orders: "Give me an updated mission plan by 0800!" The vehicles used on the Martian surface bear Kawasaki and Pennzoil logos; perhaps the whole U.S. government has been privatized.

Once on Mars, Luke's team encounters a mysterious monolith that makes weird sounds -- entirely different, of course, from the mysterious weird-sound-producing monolith of "2001," which was on the moon -- before being swallowed by a howling sand-tornado that apparently dropped by from "The Mummy." Woody, Terri, Jim and young Phil Ohlmyer (Jerry O'Connell) are dispatched to find them, but the only reason we know their rescue mission takes many months to reach Mars is because we're told it does. The herky-jerky pace of "Mission to Mars" conveys no sense of the passage of time, robbing it of the paranoid, deep-space loneliness of "2001," "Apollo 13" or even lesser movies like "Marooned."

In fairness, the dangers faced by the rescue crew as their ship is damaged in a meteor shower ("Apollo 13") and must ultimately be abandoned ("2001") make for a few exciting scenes, dispatched with typical De Palma brio. Sinise and Robbins do their best, while the consistently irritating Nielsen apparently tries to whine her way out of her spacesuit. (O'Connell is barely a noticeable presence.) But even central plot decisions about who lives, who dies and who journeys on alone to face the great cosmic hoo-ha seem to have been drawn from Kubrick's film as if from the Bible. There's even a computer with a fruity male voice, for God's sake.

When the rescue team finally completes its arduous journey from Earth and uncovers the Red Planet's long-buried secrets, things go from mediocre to much, much worse. As I said earlier, I won't give everything away (even though the film's advertising trailer does). But if you're thinking Laserium date with a willowy Martian mama, you're on the right track. Paramecia (parameciums?) and woolly mammoths are involved, somebody cries and somebody else gets to say the line, "They're us. We're them." (In this movie, that qualifies as exposition.) Apparently Jim's dead wife thought a lot about Mars and its special place in human mythology and fiction. Maybe she guessed the truth: Mars just needs a hug.